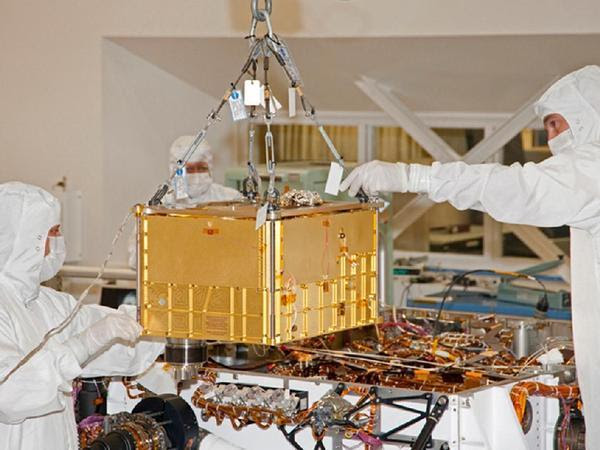 A discovery said to be "one for the history books" has been made by SAM, a suite of science instruments aboard NASA's Curiosity. Here, workers inside a clean room at the Jet Propulsion Laboratory in La Canada-Flintridge prepare to install SAM into the rover. (NASA/JPL-Caltech / January 6, 2011)

As Curiosity prepares for Thanksgiving on Mars, rover fans have been left hanging about a discovery from the Red Planet that a NASA official has billed as a big one.

Not everyone wants to. Curiosity's Facebook page had one early-morning comment from a fan: "WHAT IS IT?!?!"  Mars watchers were expressing the same sentiments on Twitter.

NPR stirred things up Tuesday with a report in which John Grotzinger, principal investigator for the rover mission, called the news a discovery for the history books: "This data is ... looking really good," he said.  The scientist told NPR it would be several weeks before NASA had anything to say. Researchers are being very careful to make sure they get it right before they blab.