Meteorite from the planet Mars, on display as part of the new exhibit, Mars: The Next Giant Leap, at The Carnegie Science Center in Pittsburgh. A Moon rock, found during the 1971 mission of Apollo 15, is also on display; one of the astronauts to land on the Moon during this mission was James B. Irwin, a native of the Beechview section of Pittsburgh.

(Image Source: Friends of the Zeiss; Photographer: Glenn A. Walsh)

(More photographs of exhibit at this link: Link >>> https://andrewcarnegie.tripod.com/csc/pix/mars/ )

Late last year, a new, 7,400 square-foot / 2,255.52 square-meter exhibit, titled, Mars: The Next Giant Leap, opened in The Carnegie Science Center in Pittsburgh. Divided in seven experiential zones, the exhibit focuses on future human exploration of, and possible settlement on, the Red Planet.

The new exhibit, which cost an estimated $4.48 million, includes a slice of a meteorite that scientists believe came from the planet Mars. The rock, from which the meteorite slice came from, probably fell to Earth after being knocked off of Mars by a larger meteorite or asteroid which hit Mars in the distant past.

Other meteorites are on display, nearby, in the lobby of the Henry Buhl, Jr. Planetarium. One large meteorite, which the public can touch, is the fifth largest fragment of the large meteorite that created Meteor Crater in Arizona; this particular meteorite, Property of the City of Pittsburgh, was first displayed at Pittsburgh's original Buhl Planetarium and Institute of Popular Science in 1939. Another meteorite on display was collected by University of Pittsburgh Professor William Cassidy, during one of his expeditions to Antarctica.

Mars: The Next Giant Leap opened to the public on Saturday, 2022 November 19, shortly before the bi-annual close approach of Mars to the Earth. Actually, Earth and Mars reach the closest point to each other every two years and two months.

Mars was in Opposition (with the Earth lying directly between Mars and the Sun - Mars visible all-night-long, approximately local sunset to local sunrise) on Thursday, 2022 December 8 at 1:00 a.m. EST / 6:00 UTC. The one week difference between Mars' closest approach to Earth and Mars' Opposition is due to the asymmetric nature of the Martian orbit.

The Red Planet appeared fairly close to the December Full Moon (“Cold Moon” on Wednesday, 2022 December 7 at 11:08 p.m. EST / December 8, 4:08 UTC). In fact, the Moon completely covered the planet Mars, in what astronomers call an Occultation, on Wednesday, 2022 December 7 at 11:00 p.m. EST / December 8 at 4:00 UTC. Amazingly, this occurred when Mars and Earth's Moon were both opposite the Sun and 100 per-cent illuminated by the Sun, but far enough north of the Ecliptic that there was no Lunar Eclipse / Eclipse of the Moon.

This Lunar Occultation was visible, weather-permitting, in most of the United States (except Alaska), Canada, Greenland, northwestern portion of Mexico, Svalbard (archipelago part of Norway), much of Europe, western portion of Russia, and a portion of northern Africa. For other observers, Mars was in Conjunction with the Full Moon (Mars 0.5 degree south of the Moon).

Today, Mars is still bright in the evening sky, but through much of the month Mars' brightness is beginning to wane. Although it will still be pretty bright at the end of January, the brightness will be 50 per-cent dimmer than at the beginning of the month as Earth and Mars separate. Look for Mars high in the east in evening twilight, and in the south later in the night, weather-permitting.

Again, there will be another Lunar Occultation of Mars late on Monday Evening, 2023 January 30 at 11:00 p.m. EST / January 31 at 4:00 UTC (Moon Phase: Waxing Gibbous). This Occultation will be visible, weather-permitting, in the southern portion of the United States, Mexico, Central America, Caribbean, northern section of South America, and most of Polynesia (but not New Zealand). Other areas will see Mars as little as 0.1 degree north of the Moon. 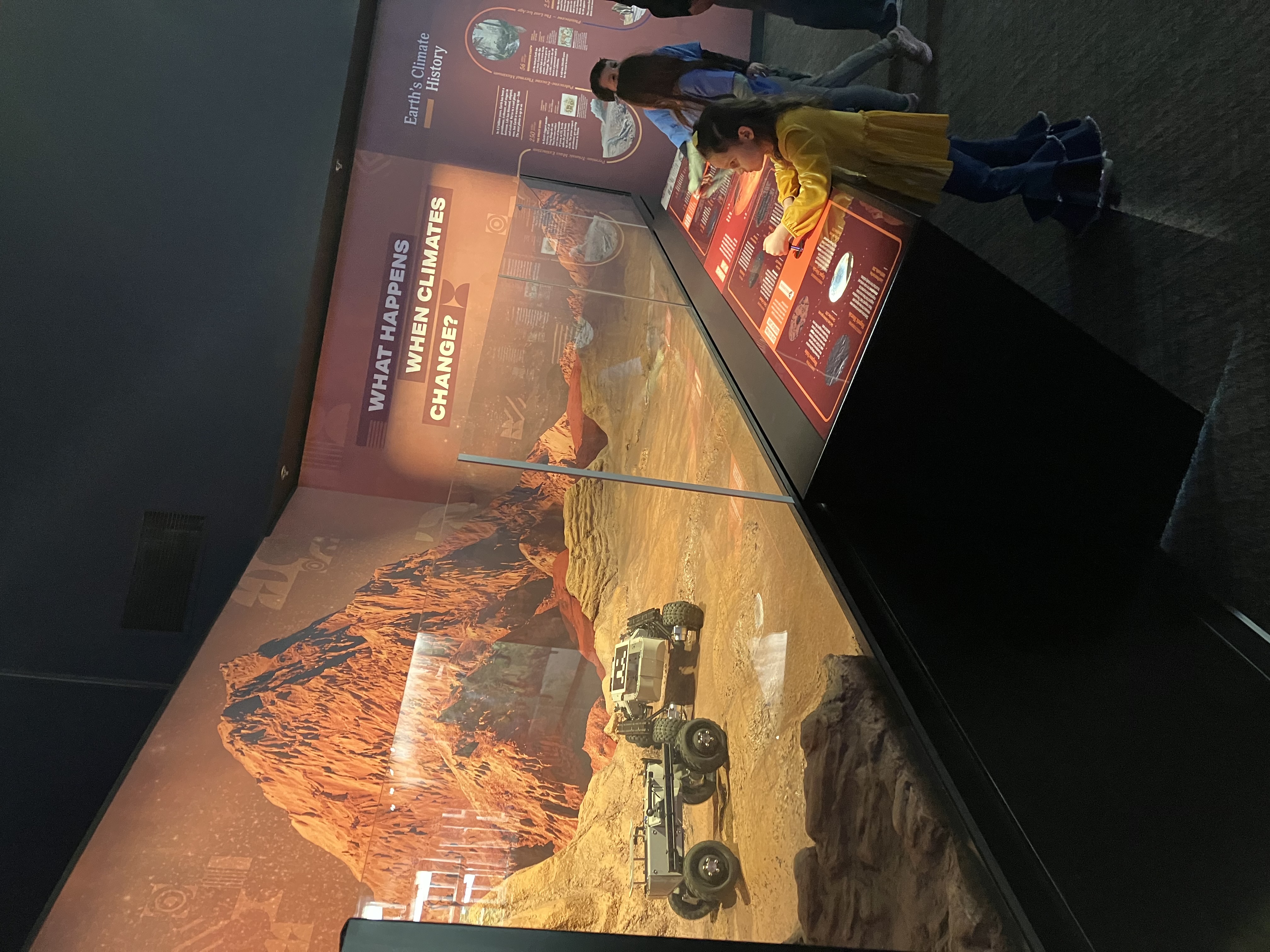 A simulated Martian landscape, where visitors can control miniature Mars rovers, while trying to search for evidence of past life.

(Image Source: Friends of the Zeiss; Photographer: Glenn A. Walsh)

(More photographs of exhibit at this link: Link >>> https://andrewcarnegie.tripod.com/csc/pix/mars/ )

The Carnegie Science Center used focus groups of students and North Side, Pittsburgh residents, as well as seeking input from local business leaders, to help design the new exhibit. In the focus groups, questions such as “Why go to Mars?” and “How do you form a new society on the planet?” were asked by the participants. Future input from Science Center visitors will help further develop parts of the exhibit.

The following are the seven experiential zones of the new exhibit ---

More on The Carnegie Science Center.

Adjacent to this Mars exhibit, on the second floor of The Carnegie Science Center, is the recently renovated Henry Buhl, Jr. Planetarium. On the day of the author's visit (Wednesday, 2022 November 23), four planetarium sky shows and one laser-light concert were performed for the public in the planetarium theater: “Story Time Under the Stars” (11:00 a.m. - geared to ages 6 and younger and their families), “Two Small Pieces of Glass” (12:00 Noon), “Stars Over Pittsburgh” (1:00 p.m.), “Laser Galactic Odyssey” (2:00 p.m.), “Beginner's Guide to the Universe” (3:00 p.m.), and “Big Astronomy” (400 p.m.). Each show lasts about a half-hour, and all planetarium shows are included in the General Admission Fee; laser-light shows (such as the 2:00 p.m. show) require an additional admission ticket.

Exhibits in the Henry Buhl, Jr. Planetarium Lobby include the fifth largest meteorite fragment (iron-nickel meteorite weighing 746 pounds / 340 kilograms) from Arizona's Barringer Meteor Crater. Visitors are encouraged to touch this meteorite. Also on display is a smaller meteorite found in Antarctica by University of Pittsburgh Professor William A. Cassidy.

In the Henry Buhl, Jr. Planetarium Lobby, visitors can also determine their weight on Mars, as well as their weight on Earth, the Moon, and Venus, on the historic Fairbanks-Morse Planetary Weight Scale. As the Arizona meteorite fragment and the Fairbanks-Morse scale were both originally displayed at the dedication of the original Buhl Planetarium and Institute of Popular Science on Tuesday Evening, 1939 October 24, both are the Property of the City of Pittsburgh.

On Saturday, 2022 October 15 just four blocks north of The Carnegie Science Center, a $2.7 million Moonshot Space Museum, regarding robotic missions to the Moon, opened. The museum is adjacent to, and operated by, Astrobotic Technology, Inc., which plans to send a robotic rover to the Moon this year. Near the end of this blog-post is the link to a blog-post describing the new Moonshot Space Museum. 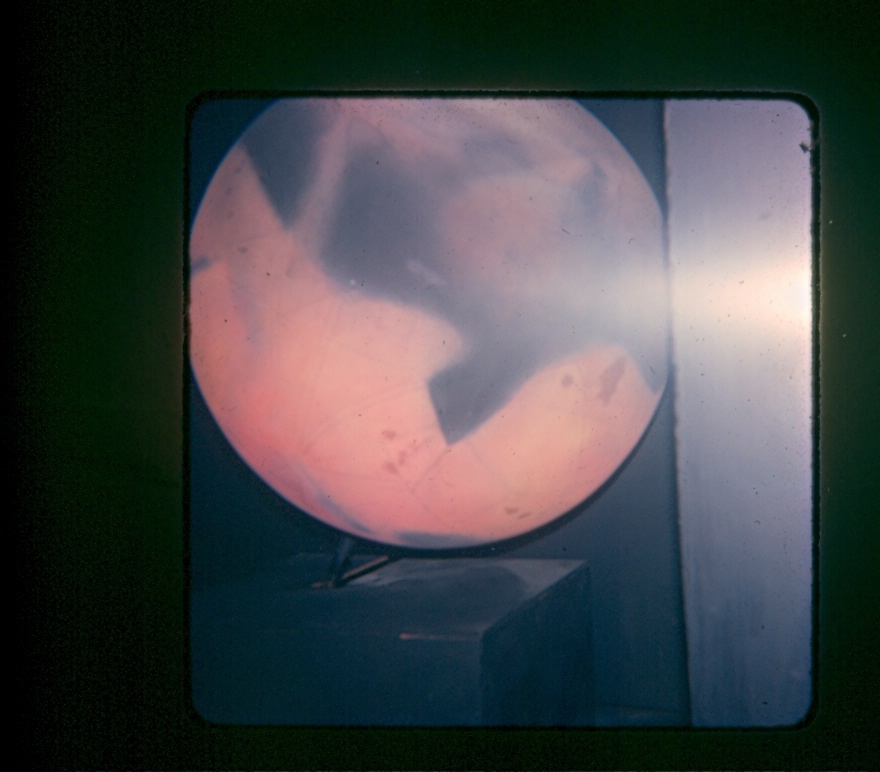 The planet Mars, as displayed in a classic, display-case exhibit in the Hall of the Universe (1950s to 1994) at the original Buhl Planetarium and Institute of Popular Science / Buhl Science Center, America's fifth major planetarium and Pittsburgh's science and technology museum from 1939 to 1991.

Mars was often the topic of science programming at the original Buhl Planetarium.

For decades (1950s to 1994), a classic, display-case exhibit showing the planet Mars was displayed in the Hall of the Universe of the original Buhl Planetarium. This exhibit showed the topography of Mars, as determined by telescopic images of Mars taken in the 1950s.

Two weight scales at the original Buhl Planetarium helped visitors determine what they would weigh on Mars: Fairbanks-Morse Planetary Weight Scale (in addition to Mars, visitors could determine their weight on Earth, Earth's Moon, and Venus on this scale); Toledo Planetary Weight Scale (three additional Toledo scales allowed visitors to determine their weight on Earth, the Moon, and Jupiter). The historic Fairbanks-Morse scale (Property of the City of Pittsburgh) continues to be available to the public in the Henry Buhl, Jr. Planetarium Lobby on the second floor of The Carnegie Science Center.

From time-to-time, the Buhl Planetarium sky show performance, in the original Theater of the Stars, would be about Mars. This includes a show titled, “The Red Planet Mars” in April of 1988, ahead of the Perihelic Opposition of Mars on 1988 September 28 (closest approach to Earth: 1988 September 22). The historic Zeiss II Planetarium Projector (Property of the City of Pittsburgh), which presented all planetarium sky shows from 1939 to 1991, is now on static display in the Space Place exhibit in The Carnegie Science Center's first-floor Atrium Gallery.

“Mars in 3-D”, a popular motion picture produced by NASA, was often shown to the general public in Buhl Planetarium's Little Science Theater (250-seat Lecture Hall); each visitor attending the film was given a pair of 3-D glasses to view the production. This 1979 film included 3-D images of Mars, taken by the Viking 1 and Viking 2 spacecraft, beginning in the Summer of 1976.

Mars was often the featured object shown to the public, particularly when Mars was close to Earth, in the original Buhl Planetarium Astronomical Observatory. Buhl's Astronomical Observatory was open for public observing every Friday evening 7:30 to 10:30 p.m. Eastern Time (ET), weather-permitting, year-round---also, some Thursday, Saturday, and Sunday evenings, weather-permitting, during the months of November through February (except the evenings of Christmas Eve and Christmas Day, when the building was closed) each year.

In addition to the opening of Mars: The Next Giant Leap exhibit on November 19, November 19 also marked the 81st anniversary (Wednesday Evening, 1941 November 19) of the Astronomical Observatory at the original Buhl Planetarium and Institute of Popular Science. The Astronomical Observatory's primary instrument was a rather unique, and now historic, 10-inch Siderostat-type Refractor Telescope (Property of the City of Pittsburgh).

The original Buhl Planetarium / Buhl Science Center also displayed a Moon Rock, collected by the Apollo astronauts, for the general public twice. The first time was in the Spring of 1970, shortly after the beginning of the manned lunar landings. The second time was in the Summer of 1989, in commemoration of the 20th anniversary of the Apollo 11 landing.

ADDENDUM - More Photographs of the new Mars: The Next Giant Leap Exhibit:

Mars: The Next Giant Leap Exhibit at The Carnegie Science Center:

Photographs of some additional exhibits at The Carnegie Science Center: