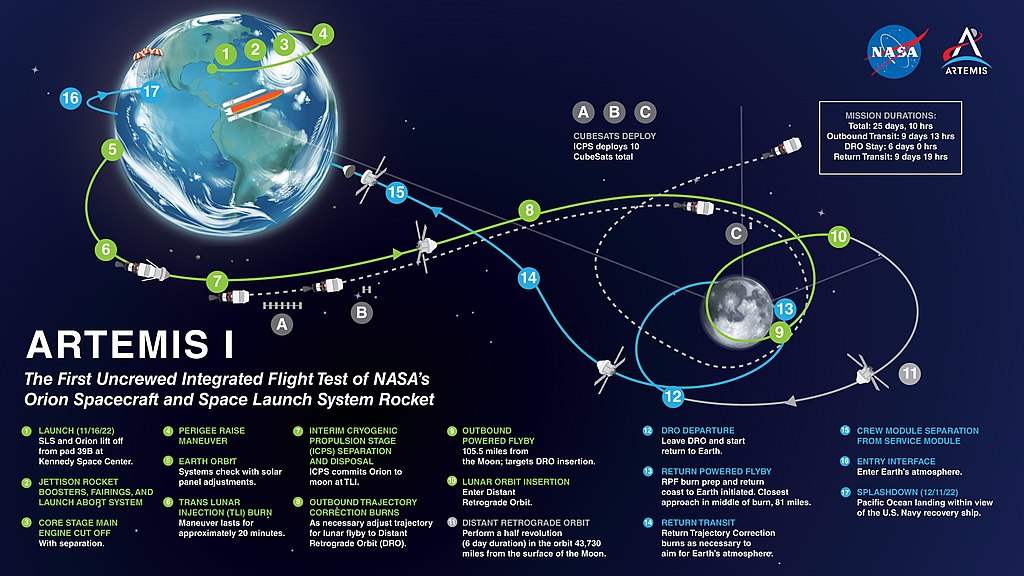 After several delays, the first launch in NASA's Artemis Space Program is scheduled for very early Wednesday Morning (shortly after Midnight). This test mission, called Artemis I, will include no human crew but will fly beyond the Moon before returning to Earth.

Late Monday afternoon (2022 November 14), N ASA managers gave the final "go" to proceed with the launch count-down. Two technical issues, regarding how the SLS rocket and Orion space capsule came through Hurricane Nicole, were closely examined by engineers before the final "go" was given.

According to a NASA blog news-release:

"Engineers examined detailed analysis of caulk on a seam between an ogive on Orion’s launch abort system and the crew module adapter and potential risks if it were to detach during launch. The mission management team determined there is a low likelihood that if additional material tears off it would pose a critical risk to the flight.

"Technicians also completed replacing a component of an electrical connector on the hydrogen tail service mast umbilical. While swapping the component did not fully fix the issue, engineers have redundant sources of information supplied through the connector."

Live coverage of the launch and other mission highlights will be provided on NASA Television, the NASA Telephone App, and the NASA Internet Web-site. The launch of Artemis I, from the historic Launch Complex 39B at the Kennedy Space Center near Cape Canaveral, Florida, is currently scheduled at the beginning of the first 2-hour launch window, which opens at 1:04 a.m. Eastern Standard Time (EST) / 6:04 Coordinated Universal Time (UTC) early on Wednesday Morning, 2022 November 16.

“We’re going to stress it and test it. We’re going make it do things that we would never do with a crew on it in order to try to make it as safe as possible,” NASA Administrator Bill Nelson told The Associated Press in August.

The primary mission of Artemis I is a proof-of-concept mission. NASA states on their Internet Web-site: “The primary goals for Artemis I are to demonstrate Orion’s systems in a spaceflight environment and ensure a safe re-entry, descent, splashdown, and recovery prior to the first flight with crew on Artemis II.”

The Artemis I mission is scheduled to last 25 days, 11 hours, and 21 minutes. In that amount of time, the Orion spacecraft is expected to travel 1.3 million statute miles / 2.09 kilometers. On the launch pad, the combined Orion space capsule and SLS rocket stand as tall as a 32-story building.

Now, Artemis I is scheduled to return to Earth for a splash-down on Sunday, 2022 December 11. A back-up launch opportunity is now scheduled for Saturday, 2022 November 19.

For 6 days, Artemis I will be in a distant retrograde orbit of the Moon. While at one point this orbit will bring the spacecraft within about 60 statute miles / 96.56 kilometers of the lunar surface, the orbit will also take the spacecraft well beyond the Moon.

Orion can be sustained for 21 days while not docked to a space station and can last up to 6 months while docked at a space station. As Artemis I is a test mission and carries no crew, the Orion capsule will actually remain in Outer Space for more than 3 weeks, to test all aspects of the spacecraft as well as all contingencies.

Unlike the Space Shuttle, the Orion spacecraft will return to Earth using parachutes and splashdown in an ocean, as did the Apollo Moon missions. The Artemis I Orion capsule, utilizing a heat shield, is scheduled to splashdown in the Pacific Ocean on 2022 December 11 (re-entry speed: 24,500 miles-per-hour / 39,428.928 kilometers-per-hour / Mach 32).