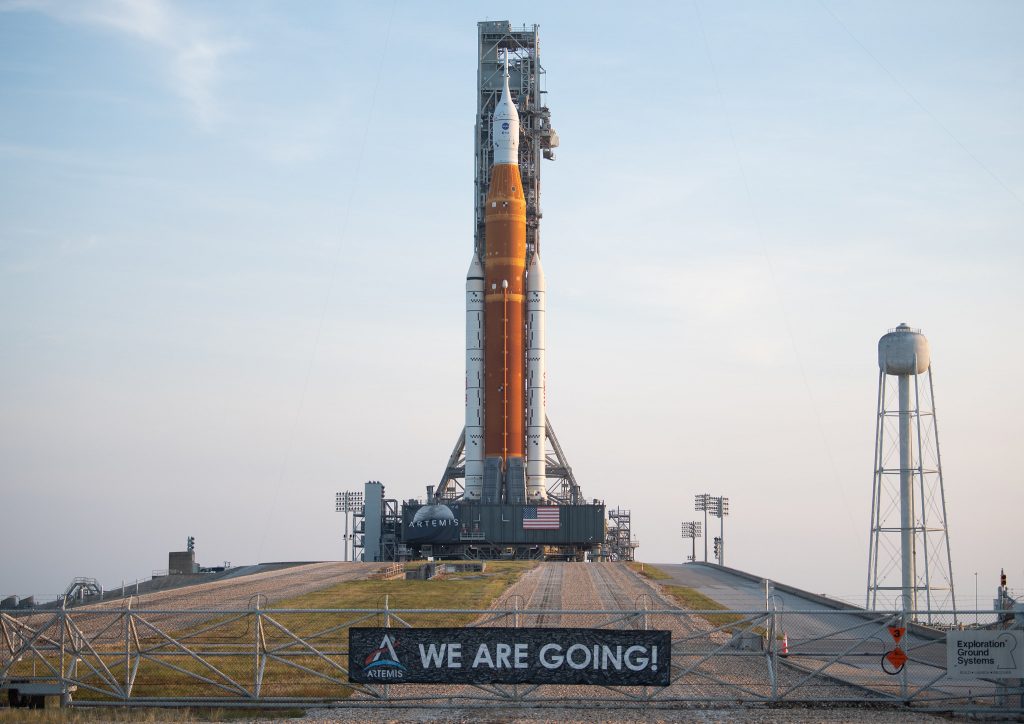 UPDATE 10 (2022 Nov. 8) - NASA is now planning a night-time launch of the Artemis I mission on November 16, with a 2-hour launch window that begins at 1:04 a.m. EST / 6:04 UTC, due to Tropical Storm Nicole which may hit the Florida Space Coast as early on November 9, perhaps as a Category 1 Hurricane.

UPDATE 7 (2022 Sept. 26) - Due to the strengthening of Hurricane Ian in the Gulf of Mexico, NASA has decided to move the Space Launch System (SLS) rocket and the Orion space capsule, of the Artemis I mission, back to the Vehicle Assembly Building (VAB) to best protect the rocket and space capsule. It could be several weeks before another launch attempt.

UPDATE 6 (2022 Sept. 24) - NASA has waved-off the September 27 launch of the Artemis I mission, due to the approach of Tropical Storm Ian to Florida. A decision to move the rocket back to the Vehicle Assembly Building (VAB) will be made on September 25. If the Artemis / Space Launch System rocket is moved back to the VAB, it could be several weeks before another launch attempt.

NASA will probably need to return Artemis I to the Vehicle Assembly Building for inspection and maintenance. This would delay the launch of Artemis I by several weeks, at the least.

UPDATE 2 (2022 Aug. 31) - NASA announced that the second launch attempt for the Artemis I mission would be Saturday Afternoon, 2022 September 3 at 2:17 p.m. Eastern Daylight Saving Time (EDT) / 18:17 Coordinated Universal Time (UTC). Engineers will start the chill-down procedure for the engines 30-to-45 minutes earlier in the countdown, a procedure that was successful during earlier tests at NASA's  Stennis Space Center in Mississippi.

For Live-stream coverage of Artemis I launch and mission hightlights, Internet Link to NASA-TV located near the end of this blog-post.

UPDATE (2022 Aug. 30) - Launch of the historic Artemis I mission was scrubbed by NASA at 8:34 a.m. Eastern Daylight Saving Time (EDT) / 12:34 Coordinated Univeral Time (UTC) on Monday Morning, 2022 August 29. One of the 4 RS-25 Space Launch System (SLS) rocket engines (engine 3) had not cooled to the proper temperature range, in order to allow super-cold propellant to begin flowing through the engine. Each engine must be thermally conditioned for the super-cold propellant, for the engine to operate properly.  Engineers are now evaluating data gathered from the launch attempt, to determine what needs to be done for a future successful launch.

Although no alternative date and time have been confirmed for a second launch attempt, NASA has stated that a launch could take place at the beginning of a 2-hour window beginning at 12:48 p.m. EDT / 16:48 UTC on Friday AfternNASAoon, 2022 September 2.

After several delays, the first launch in NASA's Artemis Space Program is scheduled for Monday, Morning. This test mission, called Artemis I, will include no human crew but will fly beyond the Moon before returning to Earth.

Live coverage of the launch and other mission highlights will be provided on NASA Television, the NASA Telephone App, and the NASA Internet Web-site. The launch of Artemis I is currently scheduled at the beginning of the first 2-hour launch window, which opens at 8:33 a.m. Eastern Daylight Saving Time (EDT) / 12:33 Coordinated Universal Time (UTC) on Monday Morning, 2022 August 29. Back-up launch dates are September 2 and September 5.

Currently, meteorologists are studying the potential impact that 3 lightning strikes, yesterday on the launch pad's 2 lightning protection towers, may have on Monday's launch. Electromagnetic environment experts will determine if any constraints on vehicle or ground systems were violated.

“We’re going to stress it and test it. We’re going make it do things that we would never do with a crew on it in order to try to make it as safe as possible,” NASA Administrator Bill Nelson told The Associated Press on Wednesday.

The primary mission of Artemis I is a proof-of-coneept mission. NASA states on their Internet Web-site: “The primary goals for Artemis I are to demonstrate Orion’s systems in a spaceflight environment and ensure a safe re-entry, descent, splashdown, and recovery prior to the first flight with crew on Artemis II.”

The Artemis I mission is scheduled to last 42 days, 3 hours, and 20 minutes. In that amount of time, the Orion spacecraft is expected to travel 1.3 million miles / 2.09 kilometers. On the launch pad, the combined Orion space capsule and SLS rocket stand as tall as a 32-story building.

For 6 days, Artemis I will be in a distant retrograde orbit of the Moon. While at one point this orbit will bring the spacecraft within about 60 miles / 96.56 kilometers of the lunar surface, the orbit will also take the spacecraft well beyond the Moon.

Orion can be sustained for 21 days while not docked to a space station and can last up to 6 months while docked at a space station. As Artemis I is a test mission and carries no crew, the Orion capsule will actually remain in Outer Space for 6 weeks, to test all aspects of the spacecraft as well as all contingencies.

Unlike the Space Shuttle, the Orion spacecraft will return to Earth using parachutes and splashdown in an ocean, as did the Apollo Moon missions. The Artemis I Orion capsule, utilizing a heat shield, is scheduled to splashdown in the Pacific Ocean on Monday, 2022 October 10.