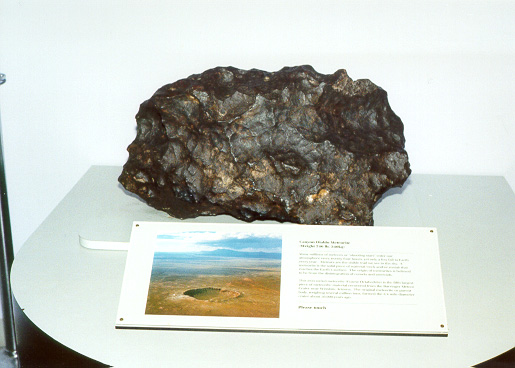 The vast majority of meteors that are visible during meteor showers are usually quite small, even though they often make a bright spectacle when entering Earth's atmosphere. However, some meteors which actually land on Earth, sometimes creating a crater, can be quite large. The above photograph shows the fifth largest fragment of the meteorite which created Meteor Crater near Winslow, Arizona, on public display at Pittsburgh's Carnegie Science Center. Owned by the City of Pittsburgh, this meteorite was originally acquired for, and displayed at, the original Buhl Planetarium and Institute of Popular Science (a.k.a. Buhl Science Center), Pittsburgh's science and technology museum from 1939 to 1991.


By Glenn A. Walsh

The annual Perseid Meteor Shower, which peaks late this week, is considered the best meteor shower of the year by NASA and most astronomers. Although, a near-Full Moon this year will make viewing the dimmer meteors a challenge.

Astronomically, the peak of the Perseid Meteor Shower comes this year during the late-night and early-morning hours of Friday and Saturday, 2022 August 12 and 13. The best time to watch most meteor showers, including this year's Perseids, is always between local midnight and dawn, when the Earth is rotating into the meteor shower.

At the peak time, sometimes up-to 50-to-100 meteors could possibly be seen per-hour, if observing conditions are ideal. Depending on your location (including elevation and number of obstructions to sky viewing, such as hills, trees, and buildings), weather conditions, Moon phase, and the condition of your eye-sight, seeing 40-to-60 meteors per-hour would be more likely.

For the peak of the Perseid Meteor Shower this year, the Moon will have just passed the bright Full Moon Phase. Hence, the dimmer meteors will be more challenging to find in a sky brightened by Moon-light.

The Moon will have passed the Primary Lunar Phase of Full Moon on Thursday Evening, 2022 August 11 at 9:36 p.m. Eastern Daylight Saving Time (EDT) / Friday Morning, 2022 August 12 at 1:36 Coordinated Universal Time (UTC). So,reflected sunlight from the Moon could obscure the dimmer meteors. Try not to look directly at the Moon, so it does not hinder your dark-adapted eye-sight.

Actually, some meteors from the Perseid Meteor Shower can be seen as early as mid-July and as late as late August (~July 17 to August 24); but they are few and far-between. Most Perseid meteors can be seen three-to-five days before and three-to-five days after the peak time, which is considered, approximately, between August 9 and 14 each year; again, the absolute peak is August 11 to 13.

Viewers in the Northern Hemisphere are fortunate that the Perseid Meteor Shower arrives during the Summer month of August, when temperatures are comfortable for night-time viewing. However, some locations (such as in the mountains) could be cooler in the early-morning hours. So, be sure to check your local weather forecast (with NOAA Weather-Radio, local forecasts on radio, television or local newspapers, Internet, or your smart-telephone or smart-speaker) and bring a sweater or jacket with you if your location has a cooler weather forecast.

Binoculars and telescopes are not very useful for finding meteors. Meteors streak across the sky in a very brief period of time, too short to aim binoculars or a telescope. So, the best way to view a meteor shower is to lie on the ground (perhaps on a blanket, sheet, or beach-towel—or possibly in a reclining beach or lawn-chair), in an area with a good view of the entire sky (with few obstructions such as buildings, trees, or hills, perhaps at a higher elevation), and keep scanning the entire sky with your naked-eyes (one-power).

The Earth's gravity then attracts many of these meteoroids to fall to Earth, and they are viewed by people as meteors, as they burn-up, often high in the atmosphere. Most are extremely small and burn-up completely. From time-to-time, larger particles enter the atmosphere and create brilliant displays known as fire-balls or bolides. If these particles are large enough, they may not completely burn-up and land on Earth as a meteorite, perhaps even creating a crater on Earth if the meteorite is large and heavy enough.

Many museums and science centers display meteorites to the general public. From 1939 to 1991, the original Buhl Planetarium and Institute of Popular Science (a.k.a. Buhl Science Center - Pittsburgh's science and technology museum from 1939 to 1991) displayed the fifth largest fragment of the meteorite that formed Barringer Meteor Crater near Winslow, Arizona. Owned by the City of Pittsburgh, this large meteorite is now displayed on the second floor of Pittsburgh's Carnegie Science Center, outside the entrance to the Henry Buhl, Jr. Planetarium. Meteorites are also on display in the Hillman Hall of Minerals and Gems at Pittsburgh's Carnegie Museum of Natural History.

There are two additional meteor showers, which both peaked at the end of July, with some meteors still visible in mid-August.

The Southern Delta Aquariid meteor shower peaked at 8:00 a.m. EDT / 12:00 UTC on Sunday Morning, 2022 July 30; these meteors are visible each year between July 12 and August 23. It is not certain which comet originated the Southern Delta Aquariids. This is considered a strong meteor shower, with 15-to-20 meteors visible per-hour, around the peak of shower; fewer would now be visible per-hour.

Another minor meteor shower may be visible to some between August 28 and September 5 each year; the peak is expected August 31 / September 1. The peak for this meteor shower is about 5:00 a.m. EDT / 9:00 UTC on Thursday Morning, 2022 September 1. The Aurigid Meteor Shower is believed to have originated as remnants of Comet Kless (C / 1911 N1). Astronomers do not know the composition of this meteoric debris. So, it is uncertain how the meteors from this shower may interact with the Earth's atmosphere, and hence, scientists are unsure how visible this shower may be each year.

So in mid-August, the time for viewing is right. And, of course, with the warm weather most of us experience in the Northern Hemisphere, this time of year, what could be better for viewing meteors?

If the weather in your area does not permit direct viewing of this meteor shower outdoors, it is possible (but not guaranteed) you may be able to use Google, Yahoo, Bing, Lycos, or your favorite Internet search engine to find special, Live-stream Web-casts of the meteor shower at one or more sites on the Internet.

A cautionary note for those who find it necessary to watch the meteor shower on the Internet. The video camera, used for each Live-stream Web-cast, can only aim at one part of the sky at a time. Hence, do not expect to see as many meteors as you might see with your own eyes outside. Outdoors, you can easily scan the entire sky for meteors, while a camera aimed at one area of the sky will only be able to see the meteors that enter that particular field-of-view.