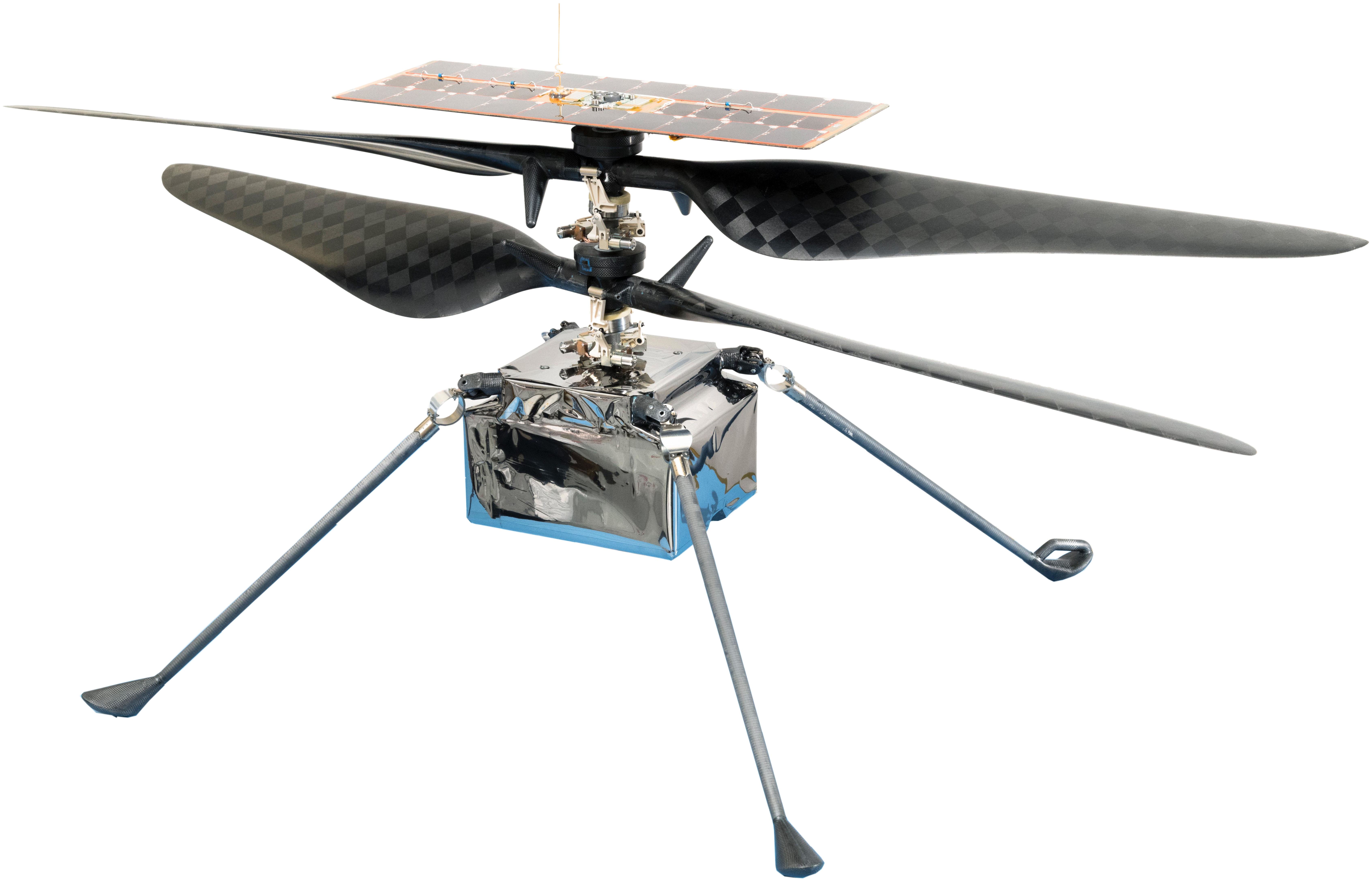 Photograph of the first interplanetary helicopter to be flown on Mars early next year, following the landing of the NASA Mars 2020 mission to be launched on Thursday.
(Image Sources: NASA, Jet Propulsion Laboratory / California Institute of Technology, Wikipedia.org, By NASA/JPL-Caltech - https://photojournal.jpl.nasa.gov/jpeg/PIA23882.jpg, Public Domain, https://commons.wikimedia.org/w/index.php?curid=89835966)

Thursday morning, NASA plans to launch the third space probe bound for Mars this month. NASA's Mars 2020 mission, including the Perseverance Rover and the first interplanetary helicopter, will join space probes from China and the United Arab Emirates traveling to Mars.

The launch of the NASA Mars 2020 mission will be broadcast, live, on NASA Television. An Internet link to NASA-TV is near the end of this blog-post.

Last Thursday (July 23), China launched their first mission to Mars (although a 2011 joint Russian-Chinese mission to Mars had a failed launch), expanding their rivalry with the United States into Deep Space. Named Tianwen-1 (Chinese for "Questions to Heaven" – from a classical poem that has verses about Outer Space), the five-ton spacecraft includes a Mars orbiter, a lander and a rover to study the Martian soil.

A surprise entry into the race to Mars is the first interplanetary spacecraft to be launched from the Arab world. The previous Monday (July 20 – the 51st anniversary of the first landing of U.S. astronauts on the Moon), the United Arab Emirates (U.A.E.) launched a space probe (from the Tanegashima Space Center in Japan) named Al-Amal (Arabic for Hope) to enter into orbit around the planet Mars, to study the planet's weather and atmosphere. Although this mission does not include a landing on Mars, the probe is expected to stay in orbit for at least one Martian year – 687 Earth days.

Led by Emirati engineers and scientists (women make-up 80 per-cent of their science team!), this mission is a collaboration with four U.S. institutions: University of California at Berkeley, University of Colorado at Boulder, Arizona State University, and Northern Arizona University.

While the U.S., Russia, and China have gotten all of the headlines for space exploration probes, the U.A.E already has nine functioning satellites in Earth orbit, launched the first Arab astronaut (on a Soyuz spacecraft from Kazakhstan) to the International Space Station (ISS) last September, and has a stated goal of establishing a human colony on Mars by the year 2117! Inspiring Arab youth is one of the major goals of the U.A.E. space program, to recall the Middle Ages when Arab scientists and mathematicians made several scientific advances.

The reason all three Mars missions are launching this month is to take advantage of a favorable alignment, between Earth and Mars, which occurs, on average, once every two years and 50 days. At this time Earth, in its closer orbit to the Sun, overtakes the slower Mars; Earth takes 365.256 days to orbit the Sun, while Mars' solar orbit lasts 687 Earth days.

It is at this time, when Earth and Mars are closest, that the travel time to Mars is much shorter (and the cost of a Mars mission is much lower). Each of these three missions will take approximately seven months to reach Mars.

This is also the best time to view Mars in the sky. Again, once every two years Mars appears larger and brighter to amateur astronomers and other planet and stargazers. Mars will appear the best in the second half of this year.

The NASA Mars 2020 mission includes the Perseverance Rover, which was designed with the assistance of the Curiosity Rover engineering team, to create a more robust Mars rover. The Perseverance Rover will have a major astrobiology mission, as well as investigate the planet's geology.

A Multi-Mission Radioisotope Thermoelectric Generator (MMRTG) will power the Perseverance Rover. Left-over as a back-up unit for NASA's Curiosity Rover (which has been operating on Mars since 2012 August 6), it was provided to NASA by the U.S. Department of Energy.

It provides a steady supply of heat that is converted to electricity for use by the rover, without the concern that solar energy panels would be adversely affected by the Martian night-time, dust storms, and low sunlight during the Mars Winter. The MMRTG is expected to have a 14-year operational life-span and will be assisted by two lithium-ion rechargeable batteries.

A novel, new tool included with this mission is the Mars Helicopter Ingenuity drone, the first such helicopter deployed beyond Earth. This will be a test for this robotic technology, which could be included on future missions to planets and moons having atmospheres.

The primary mission of Perseverance is to investigate Jezero Crater, which scientists believe may have been an 820-foot / 250-meter-deep lake 3.9 billion to 3.5 billion years ago. This crater seems to have an ancient river delta, where flowing water could have deposited a great deal of sediment during the millions of years that water may have existed on the planet's surface.

Similar such areas on Earth are known to preserve microscopic fossils for billions of years. If life once existed on Mars, scientists believe this may be one of the best spots to search for similar micro-fossils.

Source: Glenn A. Walsh Reporting for SpaceWatchtower, a project of Friends of the Zeiss.
Monday, 2020 July 27.