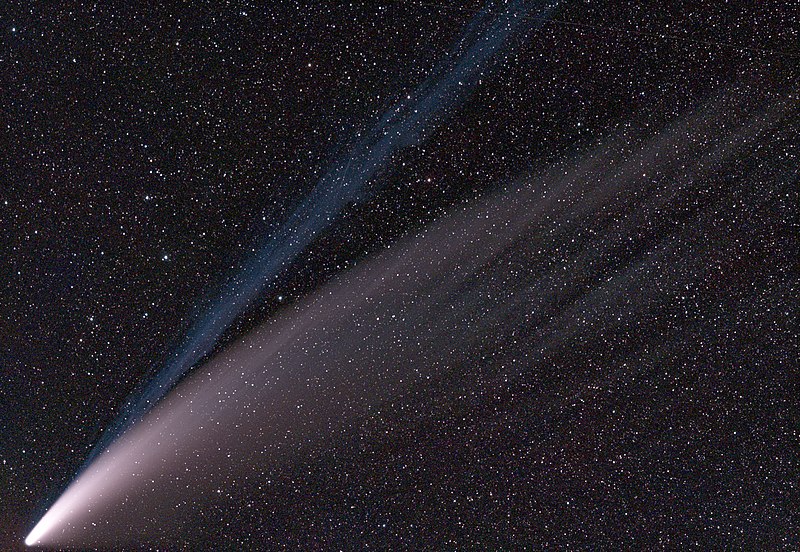 There is still time to view Comet NEOWISE, now visible in the evening sky at northern latitudes.

Officially called Comet 2020 F3 (NEOWISE), it will pass the Earth on Wednesday evening / Thursday morning (Wednesday night at 9:14 p.m. Eastern Daylight Saving Time (EDT) / Thursday at 1:14 UTC), at a distance of 64 million miles  / 103 million kilometers. As of July 18, the apparent visual magnitude of Comet NEOWISE was about +3, making it one of the brightest comets visible from Earth's Northern Hemisphere since Comet Hale-Bopp was observed in 1997.

Comet NEOWISE has already gone around the Sun and is headed back into the outer Solar System, with its closest solar approach occurring on July 3, at a distance from the Sun of 27 million miles / 43 million kilometers. Until now, the comet's orbital period was about 4400 years; with this most recent passage of the Sun, it will now take about 6700 years to return to the inner Solar System.

Although some say Comet NEOWISE can be seen with the naked-eyes (one-power), it would appear very diffuse, like a small, fuzzy blob. You really need binoculars or a small telescope to find it in the sky. And, you will not be able to notice the comet tail (which points-up, away from the Sun) without binoculars or a telescope.

Once found with binoculars or a telescope, you may, then, be able to look in the sky with your naked-eyes (one-power) and see the comet. It would be more likely visible with naked-eyes when using averted-vision. Using averted-vision is when you do not look directly at an object, but look somewhat away from the object of interest, viewing the object of interest at the edge of an eye's vision. Averted-vision is more sensitive than an eye's central vision.

This week, Comet NEOWISE is located about half-way between the Big Dipper and the horizon, when you look in the west-northwest sky about 30-to-45 minutes after sunset. Beyond that time each evening this week, the comet gets lower in the sky and sets.

This week will probably be the last good week for viewing the comet. Each day, as the comet gets further from the Sun, the comet nucleus becomes dimmer as it reflects less sunlight.

Although the best views will come at northern latitudes, including in the United States and Canada, it may be visible a little further south, such as in the southern United States. However, in the southern states the comet would appear much closer to the horizon; hence, a good, unobstructed horizon would be essential for viewing. The comet is not visible in the Southern Hemisphere.

As with all celestial observing, viewing this comet is always weather-permitting. For an object as diffuse or "fuzzy" as a comet, you need as clear as sky as possible. Clouds could make it quite difficult to locate a comet, even with binoculars or a telescope. Particularly in the Summer months when the sky can be rather humid, the lower in the sky the more difficult it will be to find a comet or any dim celestial object.

Also, city lights and Moon-light would brighten the sky making it more difficult to find dim objects.  It would be best to find an observing site away from city lights, for the best chance to find a comet. And, if possible, you want to try to look for a comet at a time when a large, bright Moon is not in the sky.

Fortunately, the Moon passed the New Moon Phase on Monday afternoon (2020 July 20 at 1:33 p.m. EST / 17:33 UTC - the 51st anniversary of the first landing of U.S. astronauts on the Moon), so Moon-light should not be a problem this week. In fact, later in the week you may also see a slim, waxing crescent Moon in the western sky.

At the following Internet link is a graphic, from EarthSky.org, which shows the location of the comet in the sky for the next few days:


Source: Glenn A. Walsh Reporting for SpaceWatchtower, a project of Friends of the Zeiss.
Wednesday, 2020 July 22.