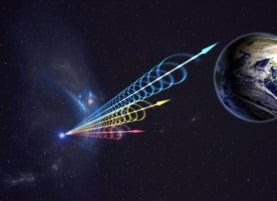 What shines brighter than the Sun, appears for only a split second and lights up Earth’s skies thousands of times each day?

If you’re stumped, don’t worry—experts are too. For nearly a decade, astrophysicists have been struggling to explain perplexing millisecond chirps of radio waves pinging through the heavens. Now, several new studies are bringing researchers closer to solving the mystery by narrowing the search for the radio flashes’ origins to youthful stellar outbursts in distant galaxies.

Dubbed “Fast Radio Bursts,” or FRBs, the first of these bright, brief events was announced in 2007 by the West Virginia University astrophysicist Duncan Lorimer and colleagues, based on data from the Parkes radio telescope in Australia. The radio signal that streamed into the Parkes dish was curiously smeared out, with its high-frequency waves arriving a fraction of a second earlier than its low-frequency counterparts—an effect attributed to scattering by diffuse plasmas that fill interstellar and intergalactic space. The more smeared a radio signal is, the more plasma it has passed through, and the farther it has presumably traveled through space. Analyzing the smear, Lorimer and his collaborators made a rough estimate that the burst could’ve come from up to a few billion light-years away. If they were in fact coming from so far away, and if more could be found, FRBs offered a way for astronomers to better measure vast cosmological distances and to probe deeper into the dark spaces between stars and galaxies. The search was on.

Based on small surveys of tiny patches of sky, since 2007 astronomers have published more than a dozen additional FRB detections, and are discussing another dozen or so that have yet to appear in the literature. Extrapolated across the entire sky, these meager results suggest FRBs are flashing overhead as often as ten thousand times per day. And if, as most researchers believe, FRBs originate far beyond our Milky Way, that means each one is releasing anywhere between an hour’s to a year’s worth of our Sun’s total energy output in the span of a few milliseconds.

Still, the sources for FRBs remain unknown. What could cause such intense, frequent events? Researchers have proposed so many answers over the years that there are now more theories for FRB origins than there are observed FRBs.