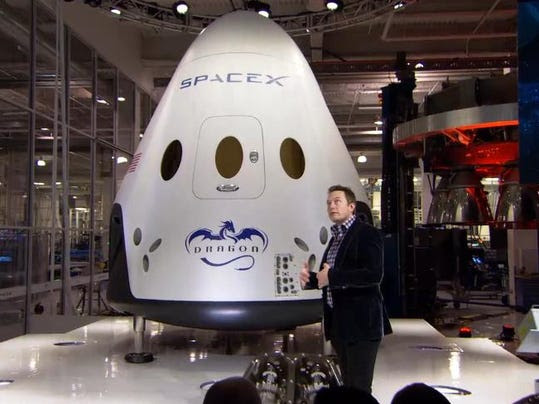 Photograph of the SpaceX Dragon vehicle for sending astronauts to the International
Space Station, as unveiled by SpaceX Founder Elon Musk at a news conference in
Hawthorne, California on 2014 May 29 (Image Sources: Getty, Florida Today).

On Friday (November 20), NASA issued the first official order for a SpaceX mission to send astronauts to the International Space Station (ISS), perhaps as early as late 2017. The very first such crew-mission order was placed with the Boeing Company in May.

This is the first two of four “guaranteed orders” NASA will make under the Commercial Crew Transportation Capability (CCtCap) contracts. Once these launches begin, in 2017 or 2018, the United State will once again have the capability of sending astronauts into orbit from American soil. Ever since the Space Shuttle fleet was retired four years ago, American astronauts have had to use Russian Soyuz space capsules to reach the ISS and return to Earth, at a cost of $70 million per seat.

Final NASA certification will occur prior to each launch. It has yet to be determined whether Boeing or SpaceX will be the first to launch astronauts to the ISS.

However, this does depend on NASA receiving the full requested funding for CCtCap contracts in fiscal year 2016 and beyond. Without full Congressional funding, these commercial crew launches may be delayed.

"It’s really exciting to see SpaceX and Boeing with hardware in flow for their first crew rotation missions," said Kathy Lueders, manager of NASA’s Commercial Crew Program. "It is important to have at least two healthy and robust capabilities from U.S. companies to deliver crew and critical scientific experiments from American soil to the space station throughout its lifespan."

SpaceX will use their “Crew Dragon” space capsule, launched on a Falcon 9 rocket, to ferry astronauts to and from the ISS. SpaceX will use the historic Launch Pad 39A at NASA's Kennedy Space Center in Florida for these launches. Launch Pad 39A was used for launching men to the Moon in the late 1960s and early 1970s, as well as Space Shuttle flights in later years.

These commercial crew launches will carry as many as four astronauts (NASA or NASA-sponsored crew members), along with about 220 pounds of pressurized cargo. These space capsules can stay at the ISS for as long as 210 days, and they can be used as “lifeboats” for emergency evacuations.

“Commercial crew launches are really important for helping us meet the demand for research on the space station because it allows us to increase the crew to seven,” said Julie Robinson, International Space Station chief scientist. “Over the long term, it also sets the foundation for scientific access to future commercial research platforms in low-Earth orbit.”