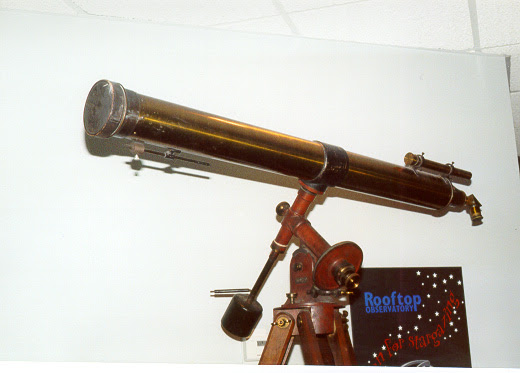 This 4-inch refractor telescope was the 37th telescope (serial number 37) built at
the John A. Brashear Company factory on Pittsburgh's North Side. It was built,
circa 1900, for Dr. David D. Kennedy. On 1972 October 16, Mr. J.K. Foster donated
this historic telescope to Pittsburgh's original Buhl Planetarium and Institute of
Popular Science. This telescope is now used at the Henry Buhl, Jr. Planetarium and
Observatory at Pittsburgh's Carnegie Science Center. Due to a wall collapse on March 16,
the historic Brashear Telescope Factory had to be demolished, for public safety.
(Image Source: Friends of the Zeiss)

Following a court order, Pittsburgh's Senator John Heinz History Center has taken temporary custody of a time capsule, and contents, found during demolition of the historic Brashear Telescope Factory on Pittsburgh's North Side. On April 1, Michael A. Della Vecchia, judge on the Allegheny County Court of Common Pleas, granted emergency injunctive relief to the City of Pittsburgh, thus requiring the Jadell Minniefield Construction Company, of the Hazelwood section of the city, to relinquish the time capsule, which holds artifacts and papers dating back to, at least, 1874, until the legal ownership of the time capsule can be determined.

The City and the construction contractor, which demolished the Brashear Telescope Factory under an emergency city contract, both claim ownership of the time capsule and its historic contents. The former historic building had been owned by the City since 2012. However, the contractor claims rights to all salvageable materials, as provided by the emergency city contract.

According to Andy Masich, President and Chief Executive Officer of the Senator John Heinz History Center, the artifacts and papers in the historic Brashear Time Capsule have all been photographed by conservators and are now being kept in their climate-controlled archives. The library and archives are located, along with a large history museum, in the Senator John Heinz History Center's building at Smallman and 13th Streets in the Strip District, at the edge of Downtown Pittsburgh.

Historian and Antique Telescope Society President Bart Fried met with Andy Masich, and inspected the time capsule and the historic contents, on Monday. Mr. Fried is writing a book on the life of John Brashear.

According to Mr. Fried, the time capsule includes approximately 60 items, including two sealed envelopes. Until the legal dispute is resolved, these two envelopes will remain unopened.

In addition to some of the major items previously reported to have been in the time capsule (see SpaceWatchtower blog post of March 25, “Historic Brashear Telescope Factory Time Capsule Found & Opened” - link to March 25 blog post at end of this blog post), Mr. Fried reports that the following items were also found in the time capsule:

Mr. Fried further reports that the Senator John Heinz History Center now has written permission, from both the City and the contractor, to take all steps to conserve, inventory, and photo-document the time capsule artifacts and papers. Nothing further can be done until the legal ownership issue is resolved.

The Brashear Telescope Factory, originally built as a frame structure in May of 1886 but rebuilt as a brick building beginning in August of 1894, was originally the home of the John A. Brashear Company which had manufactured hundreds of telescopes and precise scientific instruments for observatories and scientific institutions throughout the world, in the latter part of the 19th century and the first half of the 20th century.

Philanthropist and Pennsylvania Railroad Vice President William Thaw, Sr. provided this building, and also a new home next-door, to John Brashear free-of-charge, as Mr. Thaw's personal donation to scientific research. Both buildings, which were added to the National Register of Historic Places in 2012, were less than a block from the original Allegheny Observatory, where John Brashear assisted the astronomers.