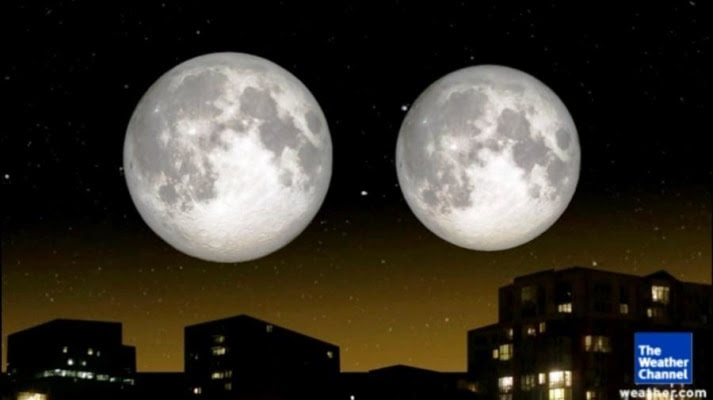 At the moment of the posting of this blog post, Monday Evening, 2014 September 8 at 9:38 p.m. EDT / September 9, 1:38 Coordinated Universal Time (UTC), marks the Full Moon of September, which is also the Harvest Moon for 2014 and the third and last so-called 'SuperMoon' of the year.

This month's Full Moon is considered by some a 'SuperMoon' because, like the Full Moons of July and August (the August Full Moon was the largest 'SuperMoon' of 2014), the Full Moon is closer to the Earth than normal - a perigee-Full Moon. Actually, this month's lunar perigee, the point in the Moon's orbit when it is closest to the Earth, occurred this morning at Midnight EDT (4:00 UTC), when the Moon was 358,389 kilometers from the Earth. At the time of a perigee-Full Moon, such as  today, larger than usual tides are predicted along ocean coastlines.

On average, throughout the year, the Moon rises 50 minutes later each day. However, this lag time between successive Moon rises shrinks to an annual minimum near the Full Moon closest to the Autumnal Equinox. This greatly reduced lag time averages between 25 and 35 minutes throughout most of the United States, and as little as 10 to 20 minutes for Canada and much of Europe, each day for several days around the time of the Full Moon. Hence, for a few days around the date of the Harvest Moon, there is little or no period of darkness between sunset and Moon rise. This provides farmers with several days of extra, uninterrupted, light after sunset, for completing the harvest (of course, weather-permitting).