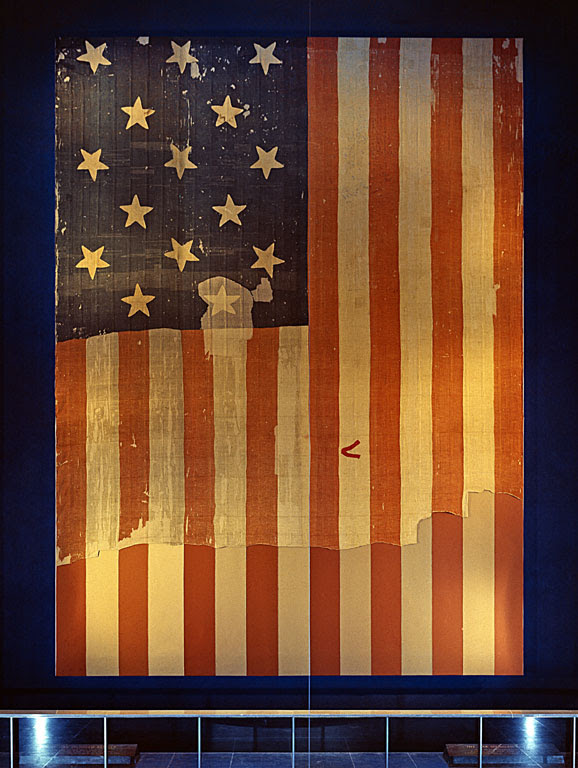 American Flag, with 15 stars and 15 stripes, flown over Fort McHenry
in Baltimore during the British rocket bombardment in the War of 1812,
inspired Francis Scott Key to write "The Star Spangled Banner."
(Image Source: Wikipedia.org )

Two-hundred years ago today, on 1814 September 14, a British rocket bombardment, allowing sight of the American Flag flying above Baltimore's Fort McHenry, inspired Francis Scott Key to write a poem which would become the lyrics to the song, The Star Spangled Banner, which became the American National Anthem in 1931.

While space exploration and commercial purposes are common uses of rockets today, along with continued military use of this technology, the rocket became a regular tool of war for the British Empire in the early nineteenth century. The earliest solid fuel rockets used by the British were known as Congreve Rockets, which were the rockets used in the 1814 Battle of Baltimore.

After the Kingdom of Mysore in India made successful use of rockets against the British East India Company, during the Second, Third, and Fourth Mysore Wars (1780 to 1799), before Mysore's eventual defeat, the British became very interested in military rocketry. When Mysore rockets were sent to England in 1801, William Congreve started a research and development program to produce better rockets for Great Britain.

Sir William Congreve, son of the Comptroller of the Royal British Arsenal, prepared a new rocket propellant mixture and new rocket motor with a strong iron tube and a conical nose. The earliest Congreve Rocket, which weighed about 32 pounds (14.5 kilograms), was first demonstrated in 1805. These rockets were first used during the Napoleonic Wars (1803 to 1815).

The American defeat by the British at the Battle of Bladensburg, Maryland, during the War of 1812 on 1814 August 24, led to Washington, DC being captured by British forces and the burning of several government buildings including the White House (originally known as the President's House or Executive Mansion), followed by a Raid on Alexandria, Virginia just across the Potomac River. After spending several days looting stores in Washington and Alexandria, the British sought to subdue the large American port city of Baltimore.

The attack on Fort McHenry began on 1814 September 13, when the British Rocket Vessel HMS Erebus started launching Congreve Rockets at the fort. At the entrance to Baltimore Harbor, the fort, constructed in the form of a 5-pointed star, successfully repulsed the 25 hours of bombardment, primarily because at maximum range the British rockets were very inaccurate. Fort McHenry's cannons had kept the British ships at maximum range.

Francis Scott Key, an attorney who was in Baltimore on an official mission for U.S. President James Madison, was aboard a British ship seeking to secure the exchange of prisoners, including Dr. William Beanes, an elderly and popular town physician of Upper Marlboro, Maryland and a friend of Francis Scott Key. Having overheard the British plans for the invasion of Baltimore, Francis Scott Key was held on British ships until the battle ended. The prisoner exchange was eventually agreed-to.

Through the rainy night of September 13 and early morning hours of September 14, Francis Scott Key noticed that Fort McHenry's "storm flag" continued to fly, due to the light from the rocket and bomb blasts. After the bombardment ended, he waited until dawn when he saw a much larger American Flag flying over the fort. Both the "storm flag," used during inclement weather, and the larger flag were sewn in 1813 by Baltimore seamstress Mary Pickersgill.

While still aboard a British ship and writing on the back of a letter he had kept in his pocket, this American victory inspired Francis Scott Key to begin the writing of a poem which would be titled, "Defence of Fort M'Henry." Of course in particular, the lyric, "the rockets red glare, the bombs bursting in air, grave proof through the night that our flag was still there," was inspired by the British rockets. Just a little later, the poem lyrics were set to a popular British song, "The Anacreontic Song," and renamed "The Star Spangled Banner."

"The Star Spangled Banner" soon became a well-known patriotic song. The U.S. Navy recognized the song for official use in 1889, as did U.S. President Woodrow Wilson in 1916. A resolution approving the song as the American National Anthem was enacted by the U.S. Congress on 1931 March 3, which was signed by U.S. President Herbert Hoover.