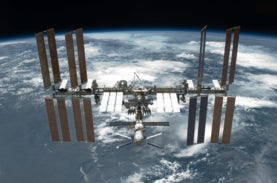 Russia-U.S. political tensions have officially reached space, the one area where the two countries have historically enjoyed a strong and productive working relationship.

In response to U.S. sanctions over Russia’s annexation of Crimea, Russian Deputy Prime Minister Dmitry Rogozin announced Tuesday that his country would not allow the International Space Station to operate beyond 2020, according to reports. Russia will also stop providing engines to power Atlas V rockets used to launch U.S. military satellites, Rogozin said.

The space station is the crowning achievement of Russian-U.S. cooperation in space—a football field-sized, $100-billion behemoth that America had hoped would operate until 2024. The station is a patchwork of U.S. modules attached to Russian modules, with the odd Japanese and European rooms added in, and it is unclear whether any country could operate the facility without the cooperation of all the partners. The U.S., Rogozin pointed out, is particularly at a disadvantage because it relies on Russian rockets to ferry NASA astronauts to and from the orbiting lab. We currently lack a means of transporting humans to low-Earth orbit on our own.

The effect of this pronouncement on current joint space activities remains to be seen. “Part of me thinks it is posturing,” says Roger Launius, associate director for collections and curatorial affairs at the National Air and Space Museum. “They’re talking about beyond 2020. There’s a world of time between now and then.”

For now, NASA and the Russian Federal Space Agency are cooperating as usual.