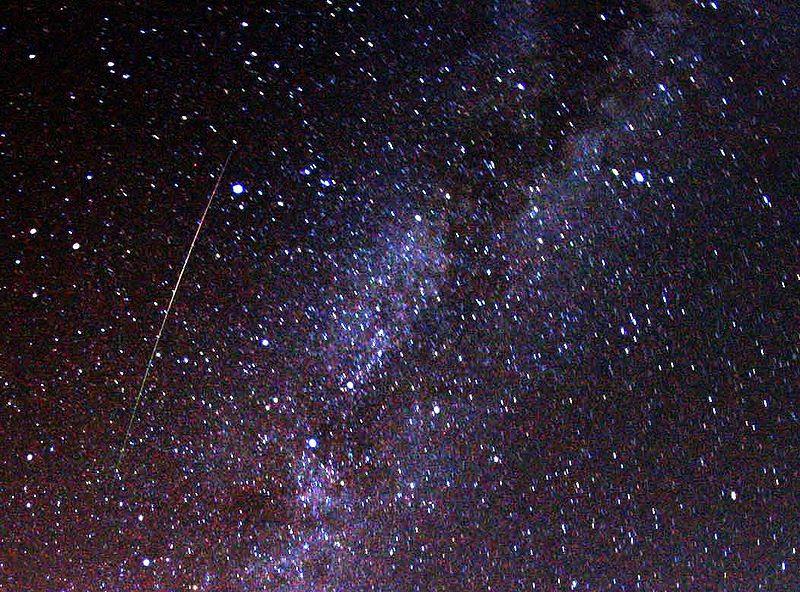 This photograph shows a Perseid meteor striking the sky just to the left of the Milky Way Galaxy. The annual Perseid Meteor Shower in August is normally considered the greatest meteor shower of the year. However, scientists predict that a new meteor shower, with debris related to Comet 209P/LINEAR, could be the strongest meteor shower / storm visible in North America in 2014, expected May 23-24 !

Tonight (May 23 to 24) scientists predict the appearance of a new meteor shower, which could be the largest of the year for the Western Hemisphere--or it could be a dud. This is the problem with scientific predictions, particularly for something brand new.

The new meteor shower is predicted to reach its peak Friday night / Saturday morning between 1:00 and 4:00 a.m. EDT (May 24, 5:00 to 8:00 Coordinated Universal Time), when, if the meteor shower is as good as predicted, it could prove to actually be a meteor storm with as many as 200 meteors visible per hour ! However, that would be the maximum visible, and it is more likely that most people would see somewhat less than that, again, if reality meets the current predictions.

And, so long as the weather cooperates. Most meteors are visible from the high atmosphere, so any cloud cover could make most meteors invisible to surface viewers.

Also, for people with a good view of the Moon, after it rises about a half-hour before the end of the predicted peak time period (Moon rise in Pittsburgh May 24: 3:25 a.m. EDT / 7:25 UTC), look for possible meteor impacts on the Moon. Yes, meteor showers affect the Moon at the same time they affect the Earth.

If the weather does not cooperate where you are viewing, this meteor shower will be web-cast:

And, whichever day you choose to watch for meteors during a meteor shower, it is always best to watch between local Midnight and daybreak. This is the time when the Earth rotates into a meteor shower.