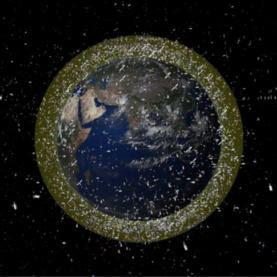 This computer illustration depicts the density of space junk around Earth in low-Earth orbit. Image: ESA

WASHINGTON — The U.S. Air Force's decision to shut down a key component of its Space Surveillance Network will weaken the service's ability to accurately detect and characterize objects in Earth orbit, experts say.

The space fence shutdown, ordered by Gen. William Shelton, commander of Air Force Space Command, also will reduce the overall capacity of the system, these experts said. At the same time, they suggested it could increase pressure on the Air Force to award a contract on a next-generation system, which has stalled amid a Pentagon-wide review of its acquisition plans.

According to two recent memos obtained by SpaceNews, the Air Force will shut down the aging Air Force Space Surveillance System, also known informally as the Space Fence, Sept. 1. The memos, from Austin Frindt, a contracting officer with Air Force Space Command, were addressed to Five Rivers Services of Colorado Springs, Colo., operator of the current Space Fence, which consists of a line of VHF radars stretching across the southern United States.