Stonehenge may have been burial site for Stone Age elite, say archaeologists

Dating cremated bone fragments of men, women and children found at site puts origin of first circle back 500 years to 3,000 BC 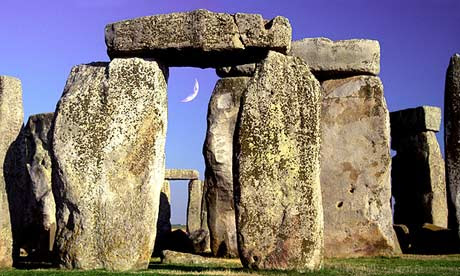 Theories of what Stonehenge was include a temple, observatory, calendar, a site for fairs or ritual feasting, or a centre for healing. Photograph: Eyebyte/Alamy

Centuries before the first massive sarsen stone was hauled into place at Stonehenge, the world's most famous prehistoric monument may have begun life as a giant burial ground, according to a theory disclosed on Saturday.

More than 50,000 cremated bone fragments, of 63 individuals buried at Stonehenge, have been excavated and studied for the first time by a team led by archaeologist Professor Mike Parker Pearson, who has been working at the site and on nearby monuments for decades. He now believes the earliest burials long predate the monument in its current form.

The first bluestones, the smaller standing stones, were brought from Wales and placed as grave markers around 3,000 BC, and it remained a giant circular graveyard for at least 200 years, with sporadic burials after that, he claims.

Source: The Guardian of London.