By: SPACE.com Staff
Published: 06/18/2012 10:20 AM EDT on SPACE.com
A large asteroid that scientists initially thought could pose a threat to Earth in the year 2040 will actually whiz safely by our planet and leave our world unscathed, NASA astronomers say.
The new prediction is based on new research of the asteroid 2011 AG5, which was discovered in January 2011. The space rock measures approximately 460 feet (140 meters) wide, and was spotted during the Catalina Sky Survey, which is operated by the University of Arizona in Tucson. 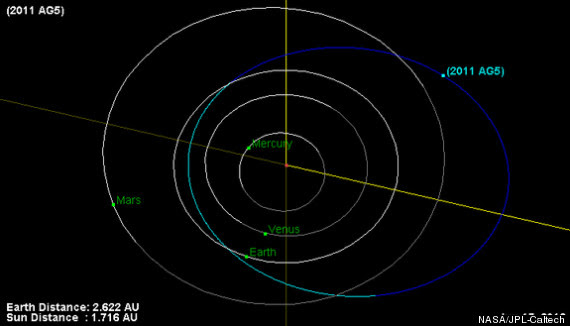 Several observatories monitored 2011 AG5 for nine months before it was too far and faint to be detected, NASA officials said.
What was known about 2011 AG5's orbital path, however, showed there was a small possibility that the space rock could collide with Earth in 28 years. But, at a recent workshop at NASA's Goddard Space Flight Center in Greenbelt, Md., scientists presented new findings, and said they are confident that in the next four years, ground- and space-based observations will indicate that the chance of 2011 AG5 missing Earth will be greater than 99 percent. [7 Strangest Asteroids in the Solar System]
"While there is general consensus there is only a very small chance that we could be dealing with a real impact scenario for this object, we will still be watchful and ready to take further action if additional observations indicate it is warranted," Lindley Johnson, program executive for the Near-Earth Object (NEO) Observation Program at NASA Headquarters in Washington, D.C., said in a statement today (June 15).