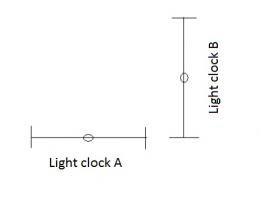 Light clocks A and B moving horizontally through space. According to length contraction, clock A should tick faster than clock B. In a new study, scientists argue that there is no length contraction, and both clocks should tick at the same rate in accordance with special relativity. Image credit: Sorli and Fiscaletti.
(Phys.org) -- Philosophers have debated the nature of time long before Einstein and modern physics. But in the 106 years since Einstein, the prevailing view in physics has been that time serves as the fourth dimension of space, an arena represented mathematically as 4D Minkowski spacetime. However, some scientists, including Amrit Sorli and Davide Fiscaletti, founders of the Space Life Institute in Slovenia, argue that time exists completely independent from space. In a new study, Sorli and Fiscaletti have shown that two phenomena of special relativity - time dilation and length contraction - can be better described within the framework of a 3D space with time as the quantity used to measure change (i.e., photon motion) in this space.

The scientists have published their article in a recent issue of Physics Essays. The work builds on their previous articles, in which they have investigated the definition of time as a “numerical order of material change.”