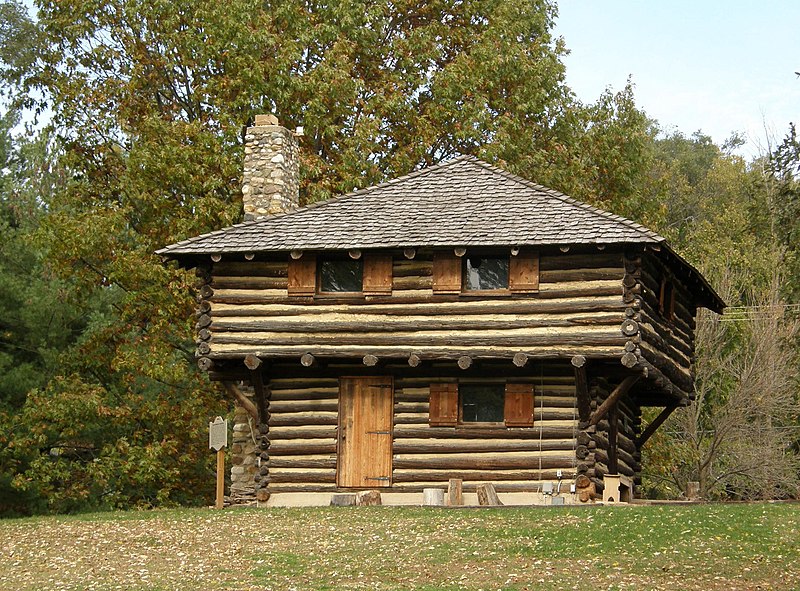 Photograph of Blockhouse replica at Fort Ouiatenon, a mid-18th century French fort on the Wabash River near West Lafayette, Indiana. Each year a weekend Hunter's Moon Festival, "Feast of the Hunter's Moon," is held at the Fort Ouiatenon site. The festival reenacts the annual 18th century Fall gathering of French and Native Americans.

More evening light, coming just after the earlier sunsets of early Autumn, occur with the annual Hunter's Moon (usually, the Full Moon of October) and a few days near the day of this Full Moon (weather-permitting).

Traditionally, this time of year helped give early Europeans, Native Americans, and early North American colonists the extra light in the early evening for hunting game, to prepare for the cold-weather months of Winter when game would be hard to procure. However, anyone can take advantage of this extra evening light, as the early, Autumn evening temperatures are still not too cold.

The exact moment of the Full Moon of October, known as the Hunter's Moon most years including this year, is 4:55 p.m. Eastern Daylight Saving Time (EDT) / 20:55 Coordinated Universal Time (UTC) on Sunday Afternoon, 2022 October 9. Of course, the Hunter's Moon becomes visible (weather-permitting) in the vicinity of the time of sunset on the days around the day of Full Moon.

While the Native Americans, as well as the farmers of Europe and early America, gave names to each Full Moon of the year, normally associating each Full Moon name with a particular month of the year, two well-known Full Moon names stray from this convention. The annual Harvest Moon and the annual Hunter's Moon are aligned with the season of Autumn or Fall, and each can occur in one of two possible months each year: September or October for the Harvest Moon and October or November for the Hunter's Moon.

The Hunter's Moon is simply defined as the Full Moon following the Harvest Moon.

For this year, the Harvest Moon was the Full Moon of Saturday Morning, 2022 September 10, at 5:59 a.m. Eastern Daylight Saving Time (EDT) / 9:59 Coordinated Universal Time (UTC). The Autumnal Equinox for this year, the beginning of the season of Autumn or Fall in the Earth's Northern Hemisphere and the beginning of the season of Spring in the Southern Hemisphere, fell on Thursday Evening, 2022 September 22 at 9:04 p.m. EDT / September 23 at 1:04 UTC.

In certain years (approximately one-third of the time), the Harvest Moon occurs in early October, as then the Full Moon of October is closer to the Autumnal Equinox than the September Full Moon. Then, the Hunter's Moon is pushed-off until early November.

On average, the Moon rises about 50.47 minutes later from one day to the next. However, during the week around the time of the Hunter's Moon and the week around the time of the Harvest Moon, the Moon rises only about a half-hour later each day, for several days before and after the Hunter's Moon or Harvest Moon, in mid-northern latitudes (and only 10-to-20 minutes later each day in much of Canada and Europe).

The reason for this is due to the ecliptic, the apparent path of the Sun, Moon, and planets through Earth's sky, which makes a narrow angle with the horizon this time of year. The inclination of the Moon's orbital plane causes the Moon to rise further north along the eastern horizon (as the rising of the Sun occurs further south along the eastern horizon), as we head towards the Winter Solstice [usually, December 21 or 22 - this year: Wednesday, 2022 December 21, 4:48 p.m. Eastern Standard Time (EST) / 21:48 UTC].

This means that, for a week around the time of the Harvest Moon, farmers had light into the evening which allowed them to finish harvesting their crops.

In the case of the week around the time of the Hunter's Moon, this gave our ancestors light in the evening to hunt more game, to save for the coming long, cold Winter months. By the time of the Hunter's Moon, the crops had all been harvested, ensuring that game could not find hiding places in farm fields, as fox and other animals tried to glean left-overs in the fields. Likewise, with many trees barren of leaves, it was easier for hunters to find their prey in the forests; of course, this depended a great deal on how early or late in October the Hunter's Moon occurred.

Also, at this time of year when hunters need moonlight the most, the Hunter's Moon appears larger and more prominent, due to the mysterious but well-known "Moon Illusion" that makes the Moon seem larger when it is near the horizon. And, while near the horizon, the Moon is often reddened by clouds and dust, creating the appearance of a large, rising red ball.

Some even liken a rising Harvest Moon or a rising Hunter's Moon to a rising "Great Pumpkin," of Peanuts comic-strip fame! In the Peanuts' network-television cartoon just before Halloween each year (originally aired on CBS-TV on 1966 October 27) titled, "Its the Great Pumpkin, Charlie Brown", the “Great Pumpkin” rises over the pumpkin patch to provide gifts to all good little boys and girls.

At this time of year, deer and other animals were fattening themselves for the long Winter. Hence, this was the perfect time for hunting these animals. The Hunter's Moon served as a warning, to both European farmers as well as North American tribes and early North American colonists, of the looming cold and snowy days of Winter.

Hence, the Hunter's Moon was often an important feast day in both Europe and America. One of these festivals, a reenactment (held on a weekend in October since 1968) of the gathering of French and Native Americans called the “Feast of the Hunter's Moon,” occurs each year at the site of Fort Ouiatenon, a mid-18th century French military garrison and trading post on the Wabash River near West Lafayette, Indiana. The first fortified European settlement in what is now the state of Indiana, the original fort was located approximately one mile down-river from Historic Fort Ouiatenon Park, where the festival now occurs.

In the Southern Hemisphere, the October Full Moon was known as the Egg Moon, Fish Moon, Seed Moon, Pink Moon, and Waking Moon.

Otherwise, the Full Moon of November, in the Northern Hemisphere, is generally known as the Beaver Moon. This was the time when Native Americans set-out beaver traps, before creeks and swamps froze-over, to ensure a good supply of warm furs for the coming Winter. Although beavers do not hibernate, by the following month the beavers would be in their lodges for the Winter, difficult for hunters to trap.

This beaver fur was its most usable at this time of year, both waterproof and warm. The furs also provided a special oil, used as a hair protector. Other researchers believe the Beaver Moon name came from the fact that beavers, themselves, are active building water dams,  preparing for Winter. The beaver was revered by the Native Americans, spiritually.

November's Full Moon sometimes is also referred to as the Frost Moon or Frosty Moon, Turkey Moon, and Dark Moon. And, some American Indian tribes referred to the November Full Moon as the Deer-Mating Moon or the Fur-Pelts Moon.

Feast of the Hunter's Moon: