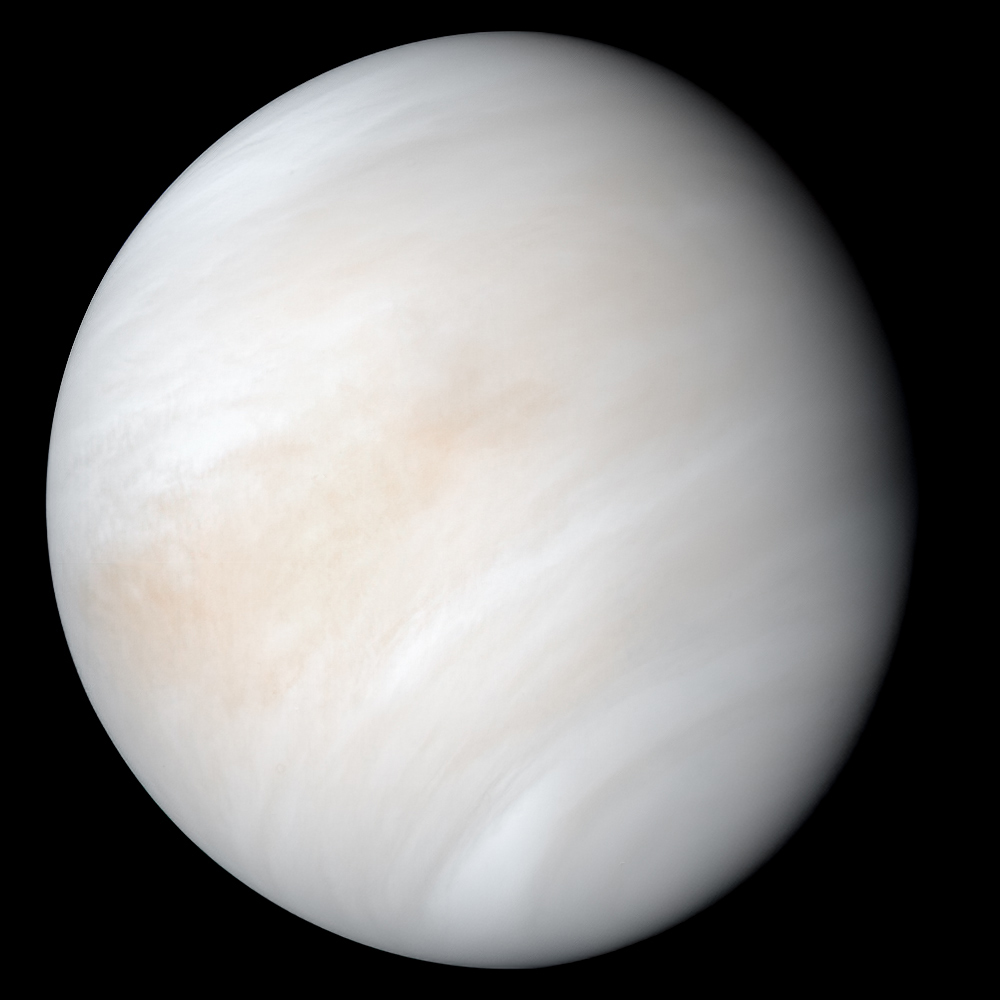 This image of the planet Venus was taken by the NASA spacecraft Mariner 10 in February of 1974, as it passed Venus at the closest distance of 3,584 statute miles / 5,768 kilometers (closest approach on 1974 February 5). Mariner 10 went on to pass planet Mercury the following month (1974 March 29) as the spacecraft became the first robotic mission to successfully fly-by more than one planet.Venus and Jupiter, the two brightest planets in the night sky, will appear very close in the morning sky this weekend.

This weekend (Saturday & Sunday, 2022 April 30 & May 1), the two brightest planets in the night sky, Venus and Jupiter, will be in Conjunction and could appear to touch or even merge in the morning sky on Saturday and Sunday.

People can view this brilliant conjunction of the two planets, weather-permitting, low in the eastern sky, close to where the Sun will be rising, just before local Dawn. Venus will be the brighter of the two objects, about six times brighter than Jupiter. Apparent Visual Magnitude for Venus will be -4.1; for Jupiter, -2.1.

As the two points of light appear to touch, they may appear to merge into one object. Binoculars or a small telescope can be used to separate the two points of light. Both Saturday and Sunday mornings, the two planets will appear about a half-degree apart (Saturday: 0.5 degree, Sunday: 0.6 degree); this small separation can be described as less than the diameter of the Moon at the Full Moon Primary Phase (~0.5 degree).

Venus is dropping down in the sky from day-to-day, as it appears to move closer to the Sun in the sky; at the same time, Venus becomes a touch fainter, but still fairly bright. You can continue to view Venus in the morning sky until late Summer. On October 22 (at 5:00 p.m. EDT / 21:00 UTC), it will pass behind the Sun (Superior Conjunction: when Venus cannot be seen, even with a telescope), and Venus can be seen in the evening sky later in the Autumn.

Currently, Jupiter is moving away from the Sun each day, in the morning sky, and becoming brighter as it gets higher in the sky. On September 26 (at 4:00 p.m. EDT / 20:00 UTC), Jupiter will be at its brightest (Apparent Visual Magnitude: -2.9) when it reaches Opposition in relation to the Sun and shines all night long.

Generally, the word Conjunction is used to describe any two celestial objects that pass close to each other. Technically, in Astronomy a Conjunction is when two objects in the sky have the same Right Ascension or the same Ecliptic Longitude, the sky coordinate systems used by astronomers. Conjunctions can occur between two planets, the Moon and a planet, or the Moon or a planet and a star. Conjunctions are a matter of the viewer's perspective. In the vast majority of cases, the two objects in Conjunction are actually great distances apart.

The actual Conjunction occurs on Saturday, 2022 April 30 at 3:00 p.m. Eastern Daylight Saving Time (EDT) / 19:00 Coordinated Universal Time (UTC). At that time, Venus and Jupiter appear at their closest: Venus is, then, predicted to be 0.2 degree south of Jupiter.

This Conjunction occurs a couple hours before the Primary Moon Phase of New Moon (Lunation #1229), which occurs on Saturday at 4:28 p.m. EDT / 20:28 UTC. This second New Moon in one calendar month is sometimes referred to as a Black Moon.

Venus appears as the brightest object in the night sky, except for the Earth's Moon, for three reasons:

While just a wee bit smaller than Earth, Venus differs greatly from the Earth. The planet's atmosphere has intense heat (hottest surface of any planet in our Solar System), crushing atmospheric pressure (about 92 times the sea-level pressure of Earth), and the clouds are composed of corrosive sulfuric acid.

Although much farther away from Earth, Venus, and the Sun, Jupiter appears as the second brightest planet in the night sky due to its massive size. Jupiter is the largest planet in the Solar System, a gas giant also covered with clouds, bands and belts of clouds.

* Other Walsh-Authored Blog & Web-Sites: Link >>> https://buhlplanetarium.tripod.com/gawweb.html
Posted by Friends of the Zeiss at 9:00 AM