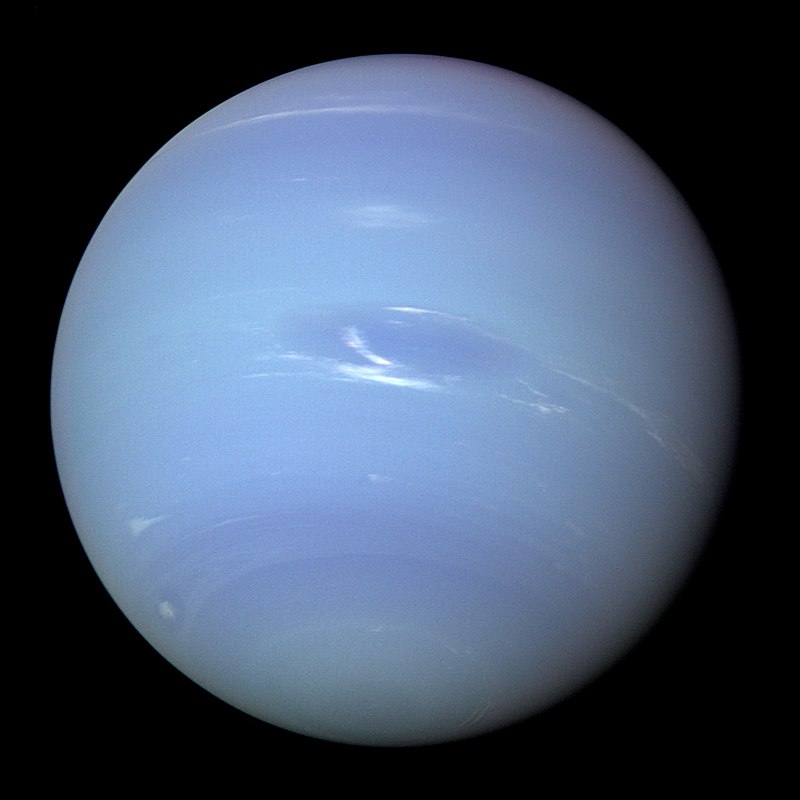 Narrow Angle Camera image of the planet Neptune taken by the NASA Voyager 2 spacecraft on 1989 August 20, as the spacecraft approached the planet for an August 25 fly-by, the first and only visit to Neptune by a human-produced space probe. "The Great Dark Spot" and cirrus clouds are seen in the center. "Dark Spot, Jr." is seen rotating into view at the lower left of the disk, with a patch of cirrus clouds (called "Scooter") visible just north of Dark Spot, Jr.

September 23 marks the 175th anniversary of the discovery of Neptune (1846 September 23), the eighth planet in our Solar System. It took only one night to discover Neptune, once mathematicians directed astronomers where to look.

Actually, it seems that famous Italian astronomer Galileo Galilei observed Neptune in 1612 and 1613, confusing Neptune for a star that was in conjunction with Jupiter.

Two scientists, independently, determined through mathematical calculations that the orbit of Uranus was being perturbed by an unseen and unknown planet even further from the Sun, using the observations of the late Mr. Bouvard.

British astronomer John Couch Adams, in 1843, began working on the calculations of the Uranus orbit, from Mr. Bovard's data as well as from other information provided by British Royal Astronomer Sir George Airy. John Couch Adams came-up with several estimates for the location of a new planet in 1845 and 1846. Not much was done with Mr. Adams' predictions.

At about the same time, French astronomer Urbain Le Verrier produced his own calculations for the position of the-then unknown planet. Again, there was little interest in searching for a new planet using a telescope.

After evaluating the calculations of both Mr. Adams and Mr. LeVerrier in June of 1846, George Airy convinced British astronomer James Challis to search for the planet. However, he found nothing after searching in August and September of 1846.

Mr. Le Verrier sent a letter, including his calculations, to Johann Galle at the Berlin Observatory. Mr. Galle received the letter on 1846 September 23, then looked for Neptune that night and found it! However, it was through a little bit of luck that he did find the newly-discovered planet, since Mr. Le Verrier's calculations were somewhat in error, by one degree.

Neptune was named for the Roman God of the sea. It is the fourth largest planet, by diameter, in the Solar System, one of the two “ice giants” (the other being Uranus). Neptune is the third most massive planet and the densest of the four giant planets.

Neptune is 17 times the mass of Earth. It is slightly more massive than Uranus, as well as denser and physically smaller than Uranus.

As the farthest major planet from the Sun, it takes Neptune 164.8 years to make one solar revolution.

Neptune's largest moon, Triton, was discovered shortly after the discovery of Neptune. The planet's other 13 known moons were discovered in the 20th century.

Until 1989, a limited amount of information regarding Neptune could be discovered using only Earth-based telescopes. The first NASA probe to fly past Neptune, in August of 1989, would change all that.

These fly-bys, of four planets and two natural satellites of two of the planets, by only two spacecraft were made possible by a periodic configuration of the planets during the late 1970s and the 1980s. When NASA discovered this special planetary configuration, early in the Space Age, the space agency arranged for the launch of Voyage 1 and Voyager 2.

Voyager 2's fly-by of Neptune provided a great deal of new information, as well as close-up images, of our Solar System's eighth planet. This included discovery of the previously unknown rings around Neptune. It is said that this fly-by completely re-wrote the science textbooks regarding what is known about Neptune!

Several planetaria and science museums across the country showed a live video feed, via the “NASA Select” satellite television channel, of the Voyager 2 passage of Neptune to the general public. This included Pittsburgh's original Buhl Planetarium and Institute of Popular Science (a.k.a. Buhl Science Center); images from Neptune were shown continuously in Buhl's 250-seat Little Science Theater / Lecture Hall.

Buhl Planetarium had provided similar coverage of Voyager 2's passage of Uranus in January of 1986. Buhl kept the leased satellite dish the next week to provide live coverage of the “Teacher-in-Space” mission of the Challenger Space Shuttle, which tragically ended shortly after launch with the explosion of the space vehicle.

Today, live coverage of a space mission passing a planet, such as the Voyager 2 passage of Neptune, would be provided on an Internet live-stream. During the 1989 August 25 passage of Neptune, the Public Broadcasting Service (PBS) provided live coverage of the passage in a continuous program titled, “Neptune All Night.” In Pittsburgh, this was shown on the city's second educational channel, WQEX-TV 16 (first sister educational television station in the nation, going on the air in 1959).

This month, Neptune is in great view with a telescope, weather-permitting. A telescope or very strong binoculars would be needed to find Neptune, which would appear as a small blue disk, somewhat similar to Uranus.

At the time of Opposition, Neptune had a distance of 28.92 Astronomical Units (a.u.) from Earth (the closest to Earth this year); one Astronomical Unit is the average distance between the Sun and the Earth (92.9 million statute miles / 149.6 million kilometers). This distance could also be expressed as 4.0 Light-Hours, the time it takes light and radio waves to travel between the two planets. At the time of Opposition, Neptune had an Apparent Visual Magnitude of +7.8, with a 2.3 arc-seconds disk visible.