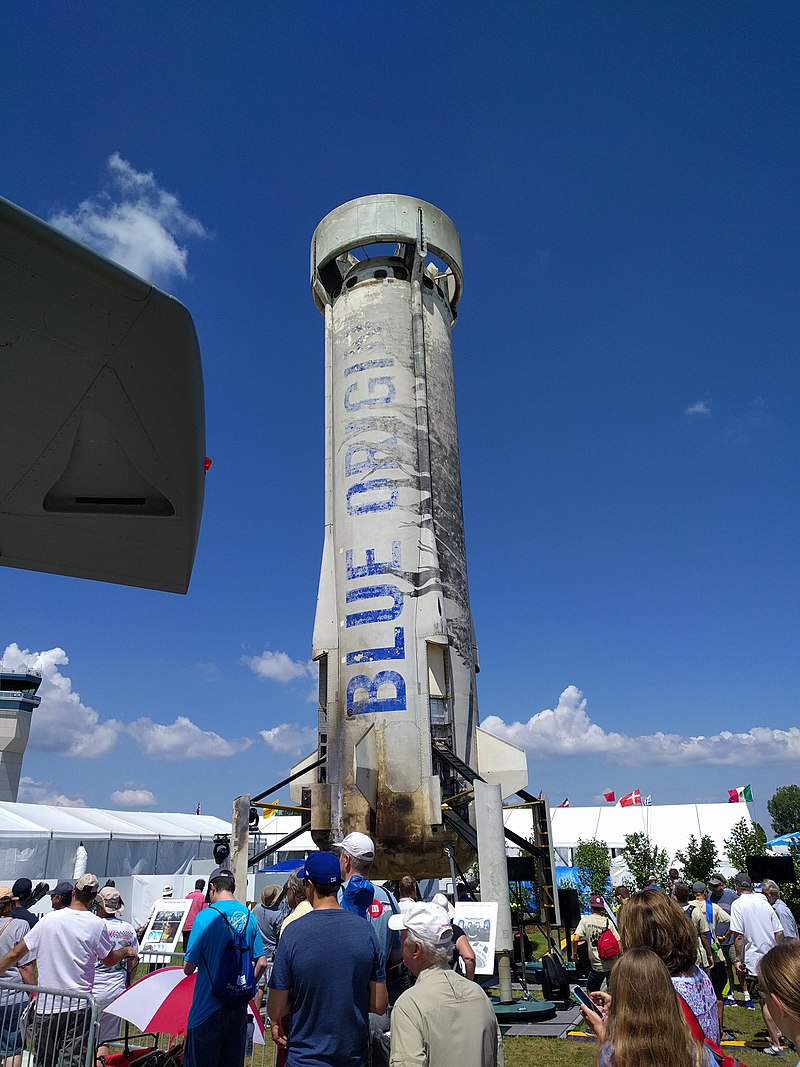 This photograph shows the Blue Origin New Shepard rocket, without the crew capsule, as displayed at the Experimental Aircraft Association AirVenture convention in Oshkosh, Wisconsin in 2017. Blue Origin will launch the first crewed New Shepard rocket to the edge of Outer Space from western Texas early Tuesday morning.

The “billionaire space race” continues Tuesday with the first crewed launch by Jeff Bezos' commercial spaceflight company, Blue Origin. The four passengers on this flight (a full complement in the New Shepard space capsule would be six passengers) include Jeff Bezos and 82-year-old Wally Funk, one of 13 women who had qualified for NASA's Mercury Spaceflight Program in 1961. Blue Origin will Live-Stream the launch early Tuesday morning.

Internet link to the Blue Origin Live-Stream is near the end of this blog-post.

As of Sunday, weather conditions looked favorable for an uneventful launch. Although there is a small chance for thunderstorms in the early morning hours of Tuesday, any storms are forecast to clear-out before launch time.

Live-Stream coverage will begin at 7:30 a.m. EDT / 6:30 a.m. CDT / 11:30 UTC. The Blue Origin Launch Site One is located on a portion of the Corn Ranch, 25 statute miles / 40 kilometers north of the west Texas town of Van Horn. As with the Virgin Galactic flight on July 11, the Blue Origin flight will be a short sub-orbital flight.

Sir Richard Branson flew his Virgin Galactic space-plane to the edge of Outer Space nine days earlier. Jeff Bezos purposely chose to wait to launch the first crewed flight of New Shepard, mission NS-16, because July 20 coincides with the 52nd anniversary of the first landing of humans on the Moon.

The Virgin Galactic space-plane launch on July 11 was a “drop-launch” from a larger aircraft, similar to the launch of the X-15 experimental rocket-plane, which was tested by the U.S. Air Force and NASA in the 1950s and 1960s. The New Shepard space vehicle is more like a traditional rocket.

The crew module will, then, separate from the propulsion module (i.e. rocket) at a point close to the peak altitude of the mission. At that point, as the crew module begins to fall back to Earth, the crew will encounter about three minutes of micro-gravity (a.k.a. “weightless-ness”) and observe the curvature of the Earth from the edge of Outer Space, as well as the blackness of space.

Then, the crew module will return to Earth, via three large parachutes, landing close to the launch site on the ground, as Russian Soyuz space capsules land. The only exception to the Soyuz-type landing on ground is that New Shepard includes thrusters which ignite, just before the landing, to help to soften the landing. The total duration of the flight of the crew module is expected to be about ten minutes.

Unlike all past human space missions, there will be no pilot or flight engineer aboard the New Shepard crew capsule. This flight will be completely automated, from beginning to end!

In the case of a rocket malfunction or other emergency, New Shepard has, what is described as, a “full-envelope” launch escape system. Solid propellant separation boosters can separate the crew module from the propulsion module, and the crew capsule would then use parachutes to return to Earth.

As mentioned, Jeff Bezos, who founded Blue Origin in 2000 as well as Founder of the well-known Amazon on-line market company, will be aboard the very first crewed launch of New Shepard. He will be accompanied by his brother, Mark Bezos.

Wally Funk, now 82 years-old, will become the oldest person to ever fly in Outer Space. The late U.S. Senator John Glenn currently holds this record, when he launched as a Payload Specialist on the Space Shuttle Discovery (mission STS-95) on 1998 October 29, when Senator Glenn was age 77. Of course, John Glenn is well-known for being the first American to orbit the Earth in the Mercury capsule Friendship 7 (three orbits in the 4 hour and 55-minute flight) on 1962 February 20, when John Glenn was age 40.

In 1961, Wally Funk was at the top of her “Mercury 13” class of 13 women who all qualified to fly as part of the Woman in Space Program. Ms. Funk is a very experienced pilot with 19,600 flight hours.

However, NASA never pursued flying women in space in the 1960s, even though Russian female cosmonaut Valentina Tereshkova flew, alone, for almost three days in Earth orbit beginning on 1963 June 16. NASA did not launch a woman into space until 1983 June 18, when Sally Ride flew on the Space Shuttle Challenger (mission STS-7) and was the third woman to fly in Outer Space.

New Shepard mission NS-16 will also include the youngest person to ever fly in Outer Space. Dutch teenager Oliver Daemen, the company's first paying customer, had originally been set to fly on the second New Shepard flight. However, the unidentified person who had won a June 12, charity auction for a ticket on the first flight had a “scheduling conflict” on July 20. So the 18-year-old Oliver Daemen will make history on Tuesday morning!

Following a successful NS-16 flight on Tuesday, Blue Origin plans two additional New Shepard flights this year with paying customers, starting sub-orbital, commercial space tourism in earnest. The next flight of New Shepard is expected to be in late September or early October.