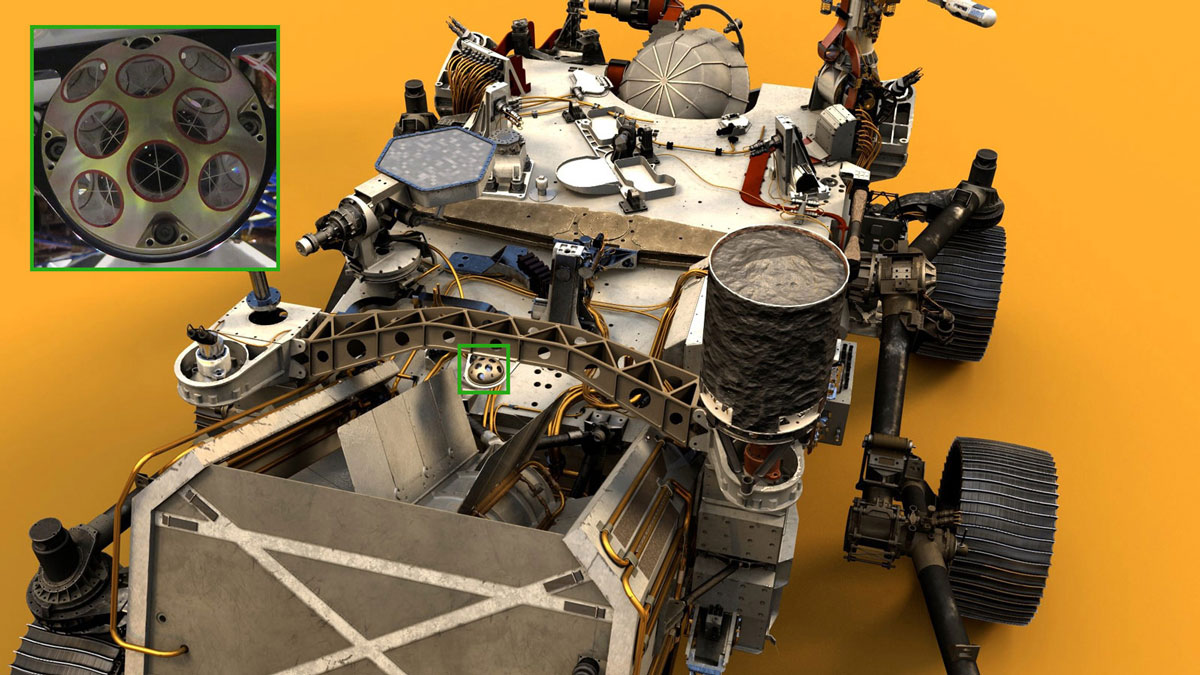 In the upper left of this image is the Laser Retroflector, which will be located near the center of NASA's Mars Perseverance Rover in the larger image. Some time in the future, a Mars orbiter spacecraft will be able to use a laser to determine the exact location of Perseverance on the Martian surface.

Astronauts on the lunar landing missions of Apollo 11, 14, and 15 installed Laser Retroreflectors on the Moon, so scientists could better determine the distance between Earth and the Moon. Now, NASA is sending a Laser Reflector to Mars, on the Perseverance Rover, for similar scientific experiments.

Laser Retroreflectors are small arrays of special mirrors which reflect a laser beam directly back to its source, as a bicycle reflector reflects traffic light back to the vehicle source. Scientists use Laser Retroreflectors for laser ranging experiments, such as distance between planets or the distance between an object in orbit and a planet. Such experiments can also be used to determine the shape of a planet, the orbit of a planet, and how the planet's orbit changes over time.

In the case of the Laser Retroreflectors left on the Moon, laser beams are directed from Earth to the Moon; scientists measure the time it takes the laser beam to reach the Moon and return to Earth. The result of this experiment has provided detailed data regarding how the Moon is slowly moving farther away from the Earth. At the present time, the Moon is moving 1.49 inches / 3.8 centimeters away from the Earth each year.

In the case of Laser Retroreflectors on Mars (smaller than the Laser Retroreflectors left on the Moon), it is currently not possible to conduct laser ranging experiments directly from the Earth, due to the great distance between the two planets. A future Mars orbiter spacecraft will use a laser, not yet developed, to conduct laser ranging experiments from Martian orbit.

Scientists, then, will be able to determine the location of rovers on the surface of Mars. As NASA will know the precise orbit of the spacecraft originating the laser beam, scientists will then be able to derive the laser ranging data sought from the Laser Retroreflector on the Martian surface. This could also make future landings on Mars more precise.

These laser ranging experiments could also provide future proof of Albert Einstein's General Theory of Relativity. As Perseverance is mobile, scientists will be able to receive data from several points of reference on Mars. This will help determine the influence on Mars' orbit from curvature in space-time. This could help scientists understand how gravity shapes our Solar System, and possibly even understand the roles of Dark Matter and Dark Energy in our Universe.

Originally titled NASA's Mars 2020 mission, the Perseverance Rover was designed with the assistance of the Curiosity Rover engineering team, to create a more robust Mars rover. The Perseverance Rover will have a major astrobiology mission, as well as investigate the planet's geology. The project is managed for NASA by the Jet Propulsion Laboratory, a division of the California Institute of Technology in Pasadena, California.

Source: Glenn A. Walsh Reporting for SpaceWatchtower, a project of Friends of the Zeiss.
Wednesday, 2020 October 7.