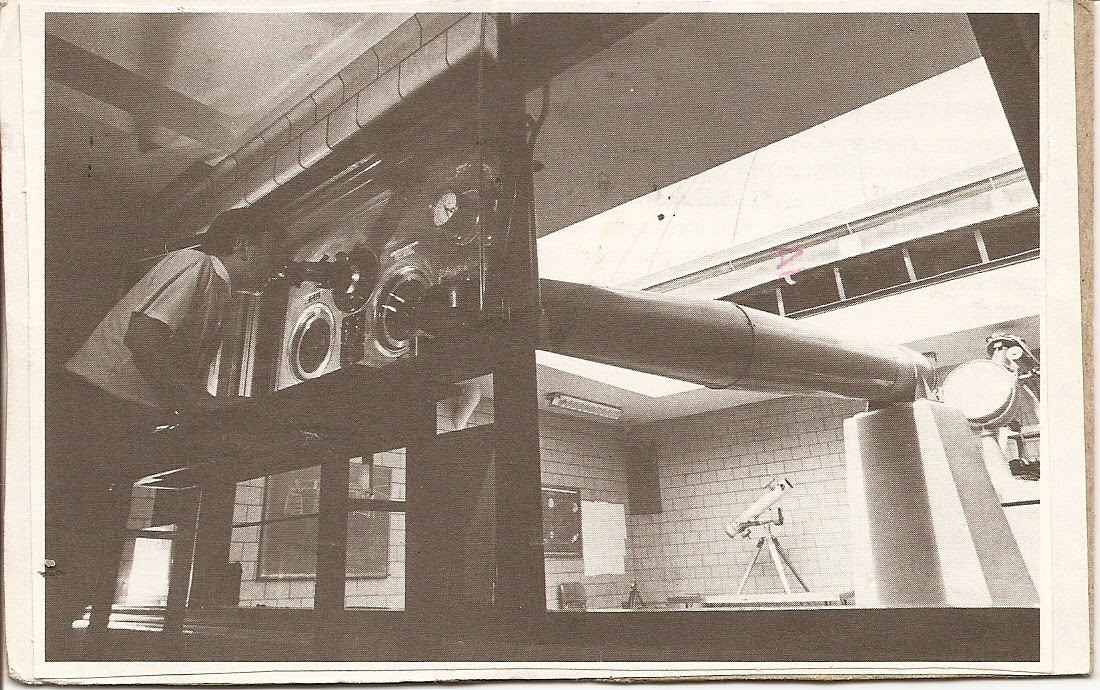 Pictured is the 10-inch Siderostat-Type Refractor Telescope in operation at Pittsburgh's original Buhl Planetarium and Institute of Popular Science (a.k.a. Buhl Science Center) in the 1980s. While the telescope tube is permanently mounted on a concrete pier (telescope tube does not move, except for the movements of the Earth), a flat first-surface mirror (which does move by an electric motor, with a clock-drive mechanism), behind the telescope, reflects images of the sky into the telescope. And, while the telescope remains out in the cooler air, people can look through the telescope while remaining in a heated room (i.e. a glass wall separates the eyepiece from the rest of the telescope). (Image Source: Francis G. Graham, Professor Emeritus of Physics, Kent State University)

The telescope is a rather unique 10-inch Siderostat-Type Refractor Telescope, which was installed in Pittsburgh’s original Buhl Planetarium and Institute of Popular Science in 1941. The 75th anniversary of this telescope will be on November 19th. This type of specialized telescope, which is specifically designed for use by the public, is rather rare. Upon re-installation of this telescope, it would be the largest Siderostat-Type Telescope in the world, as two larger such telescopes have both been dismantled.

A huge 49-inch Siderostat-Type Refractor Telescope was built for a special exhibition in Paris in 1900. After the exhibition, when the telescope could not be sold, it was dismantled. The University of Paris still possesses the telescope's 49-inch objective lens, but the rest of the telescope is gone.

Around 1929, a Philadelphia businessman, Gustavas Wynne Cook, built a 15-inch Siderostat-Type Refractor Telescope (with the lens and mounting coming from John Brashear's company in Pittsburgh) for his suburban estate. At Mr. Cook's death in 1940, the telescope and observatory were donated to the University of Pennsylvania. After disposing of the suburban property in 2007, the telescope was given to amateur astronomers in Jacksonville, Florida; to this day, they have not been able to raise the funds to build a new observatory for this telescope.

Friends of the Zeiss Project Director Glenn A. Walsh, who served as Astronomical Observatory Coordinator of Pittsburgh's original Buhl Planetarium (a.k.a. Buhl Science Center) in Allegheny Center from 1986 to 1991, addressed the Pittsburgh City Planning Commission regarding this project on October 4. The following is the prepared text of his comments to the Commission (blog-post continues following the text of this public statement):

Good afternoon, I am Glenn Walsh, 633 Royce Avenue, Mt. Lebanon, Project Director of Friends of the Zeiss. From 1986 to 1991, I was Astronomical Observatory Coordinator of the original Buhl Planetarium in Allegheny Center.

We have reviewed The Carnegie Science Center MDP and find something missing: an observatory for a historic, city-owned telescope that the Science Center promised the City, by legal memorandum of understanding, would be included in the Science Center expansion. However, the height, location, and configuration of the proposed expansion makes installation of any telescope not feasible. Hence, we question if installation of this telescope was seriously considered.
Called a Siderostat-Type Telescope, it has a unique design, specifically for public use. It allows the public to remain in a heated room, while the telescope stays out in the cooler air. Built at Buhl Planetarium in 1941, it will mark its 75th anniversary on November 19th. With a 10-inch lens, upon re-installation it would be the largest Siderostat-Type Telescope in the world, as two larger such telescopes have both been dismantled.

According to a 2013 Pursuant Ketchum Fundraising Analysis, funding any Science Center expansion would be difficult. So, it seems unlikely another expansion could occur in the foreseeable future.

We ask that the Planning Commission seek clarification of this issue before approving the MDP. Our question is simple: With this city-owned telescope removed from Buhl Planetarium, and, currently, no feasible way to install it at the Science Center, how will the Science Center now keep its legal commitment to the City, and when will city residents, again, be able to use this historic telescope?

Following the Public Comment Period, the Planning Commission asked the Science Center representatives to address Mr. Walsh's concerns. Ron Baillie, Henry Buhl, Jr. Co-Director of The Carnegie Science Center, said that the legal Memorandum of Understanding had no time limit; the Science Center was, hence, not required to install the telescope at this time.

It is odd that Mr. Baillie would call the Siderostat-Type Telescope obsolete. When is any telescope, that can continue to serve its main purpose, obsolete? Would he also say that The Carnegie Museum's famous dinosaur skeletons are obsolete, and we can learn no more from them, simply because they are old?

Indeed, for use by the public, a Siderostat-Type Telescope is still quite advanced, particularly considering Buhl's telescope was built in 1941! With the Siderostat-Type Telescope, the public can use the telescope year-round, while standing in a heated observing room. With most other telescopes, including the Science Center's current telescope, during the colder weather the public has to be outside with the telescope, if it is used at all in the cold weather (the Science Center closes their observatory during the cold weather).

Of course, telescopic images can now be brought indoors to computer or television screens. But, telescopic view by video can be viewed just as easily at home as it can be in a planetarium or science center! When people visit a planetarium or science center, they want to look through a telescope; a Siderostat-Type Telescope can make such an experience much more comfortable during the colder weather.

(Additional radio news coverage of this issue, including short interview with Glenn A. Walsh by reporter Elaine Effort, on KQV-AM 1410 NewsRadio on Friday Afternoon, 2016 October 7.)

Source: Glenn A. Walsh Reporting for SpaceWatchtower, a project of Friends of the Zeiss.
2016 Oct. 6.