Three images from Space, of the 9/11 Attacks on Manhattan,
followed by a description of the view from the International Space Station. 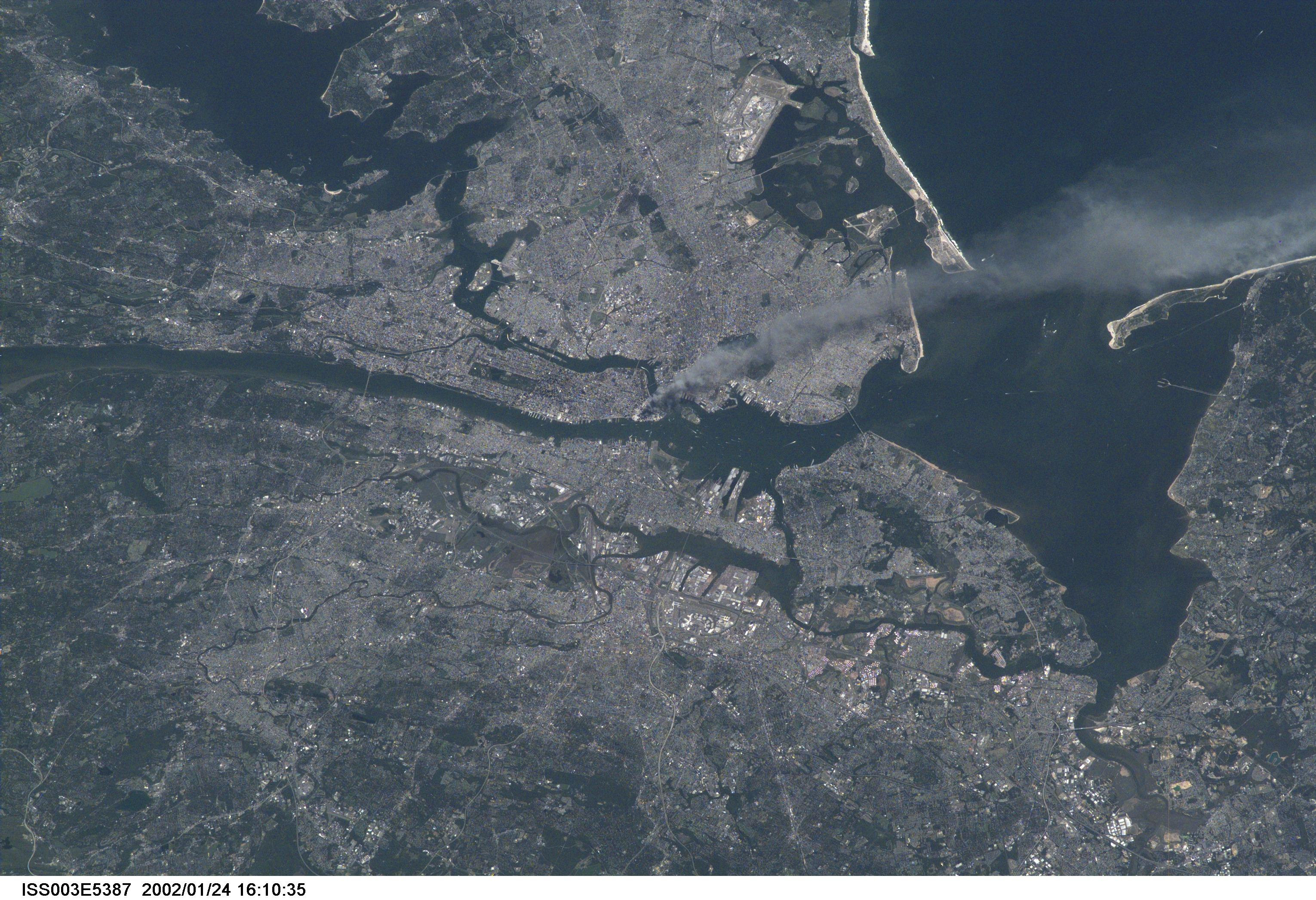 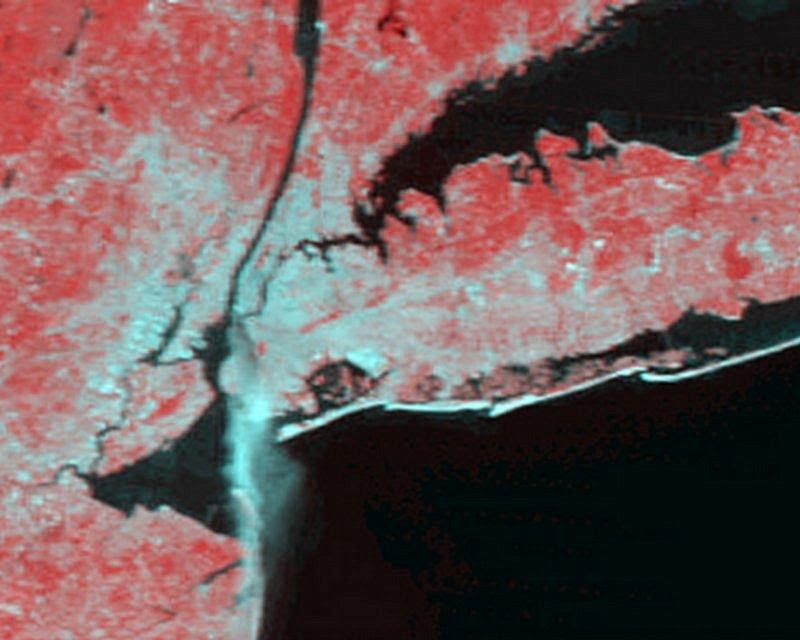 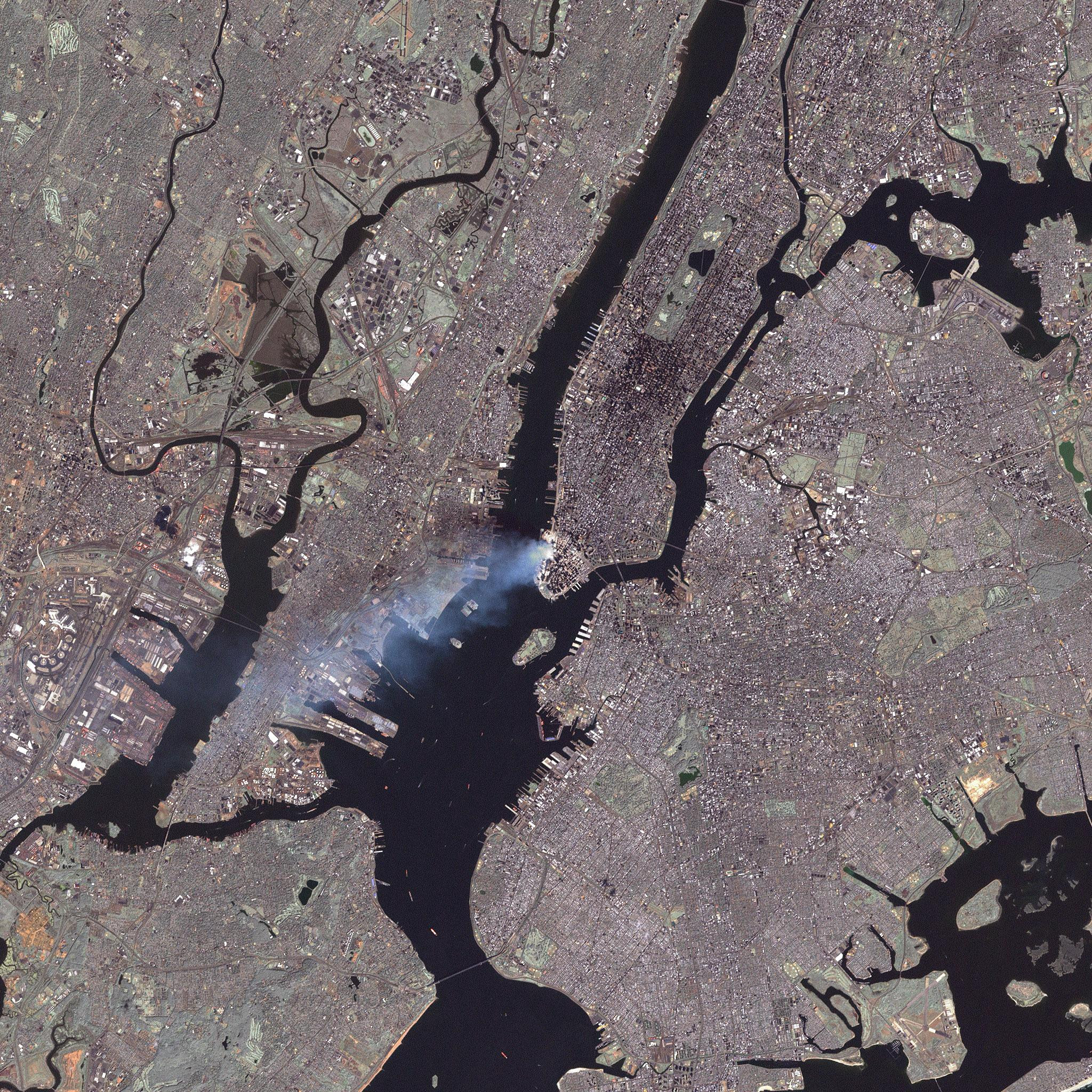 At the time of the 9/11 attacks, Astronaut Frank L. Culbertson, Jr. (Captain, U.S. Navy, now retired), was Commander of Expedition 3 on the International Space Station. He was the only American in space at that time.

Captain Culbertson was accompanied on Expedition 3 by two Russian cosmonauts, Flight Engineers Vladimir Dezhurov and Mikhail Tyurin. They had been in space for exactly 30 days, after a delay in launch of a few weeks, before the events of 9/11 occurred.

At 10:03 a.m. EDT / 14:03 UTC, United Airlines Flight 93, which had been commandeered by four hijackers, crashed in a field in Somerset County, Pennsylvania, near the small town of Shanksville, about 65 miles / 105 kilometers southeast of Pittsburgh. When the passengers attempted to regain control of the aircraft, the hijackers intentionally crashed the plane in Western Pennsylvania, rather than continuing to their original target. Although news of this hijacked aircraft had resulted in the mass evacuation of Downtown Pittsburgh, it is now believed that the hijackers' plan was to crash this plane into either the Capitol or the White House in Washington.

At that time, without the ability to receive standard radio or television broadcasts, or regular access to the Internet, the International Space Station crew had no idea of what was happening in New York City, Washington, or Shanksville until Captain Culbertson made a routine contact with ground control, regarding results of basic medical tests of the crew members, on the morning of 9/11. As Captain Culbertson was speaking to Flight Surgeon Steve Hart on the ground at about 10:00 a.m. EDT / 14:00 UTC, Dr. Hart mentioned that they had just lost contact with a fourth airplane over Pennsylvania.

After checking the International Space Station's location on a nearby lap-top computer, Captain Culbertson realized that they would soon be flying over New England, where they could get a view of New York City, since it was “such a perfect weather day all over the United States.” After quickly finding a video camera, he started shooting video, from a window in the Russian segment of the Station, of Manhattan from above Maine, about 400 miles away.

The only thing he could see, which appears on the video he shot, was a big black column of smoke coming from New York City, over Long Island and over the Atlantic Ocean. But, when zooming-in with the camera, he saw a big gray blob enveloping Lower Manhattan. He later learned that the big gray blob had been caused by the collapse of the second World Trade Center tower.

After several seconds, New York City was beyond the spacecraft's horizon. He then knew they had 90 minutes to set-up additional cameras for the next pass over the Eastern United States, which would allow more videography of the situation.

Captain Culbertson, along with the two Russian flight engineers, manned cameras over the next pass. On this pass, the International Space Station flew further south, so they took pictures of a large part of the country while looking for additional attacks, along with additional images of the New York area. They did fly directly over the Pentagon, and Captain Culbertson said he could see the gash in the building.

Within about two orbits of the International Space Station after the attacks, Captain Culbertson said that all the airplane contrails that can normally be seen criss-crossing the country were gone. By this time, the Federal Government had ordered all commercial and private aircraft grounded, indefinitely. He said the only contrail that could be seen, flying from the central part of the United States to Washington, was that of Air Force One with the President of the United States on-board.

At that time of great uncertainty, many critical Federal facilities were moved to undisclosed locations, for security purposes. Houston's Johnson Space Center Mission Control was also moved to an undisclosed location, according to Captain Culbertson. So, for a while, most of the information sent to the International Space Station came from Moscow.

The next day, Captain Culbertson learned that a fellow classmate from the U.S. Naval Academy, Chic Burlingame, was the captain of the American Airlines jet aircraft that hit the Pentagon. From a letter he wrote on 2001 September 12, Captain Culbertson said, “I can't imagine what he must of gone through, and now I hear that he may have risen further than we can even think of by possibly preventing his plane from being the one to attack the White House. What a terrible loss, but I'm sure Chic was fighting bravely to the end.”

Letters from NASA Astronaut Frank Culbertson explaining his view of the 9/11 tragedy from the International Space Station:
Link >>> http://www.nasa.gov/topics/nasalife/features/sept11_culbertson.html


Source: Glenn A. Walsh Reporting for SpaceWatchtower, a project of Friends of the Zeiss.
2016 Sept. 11.