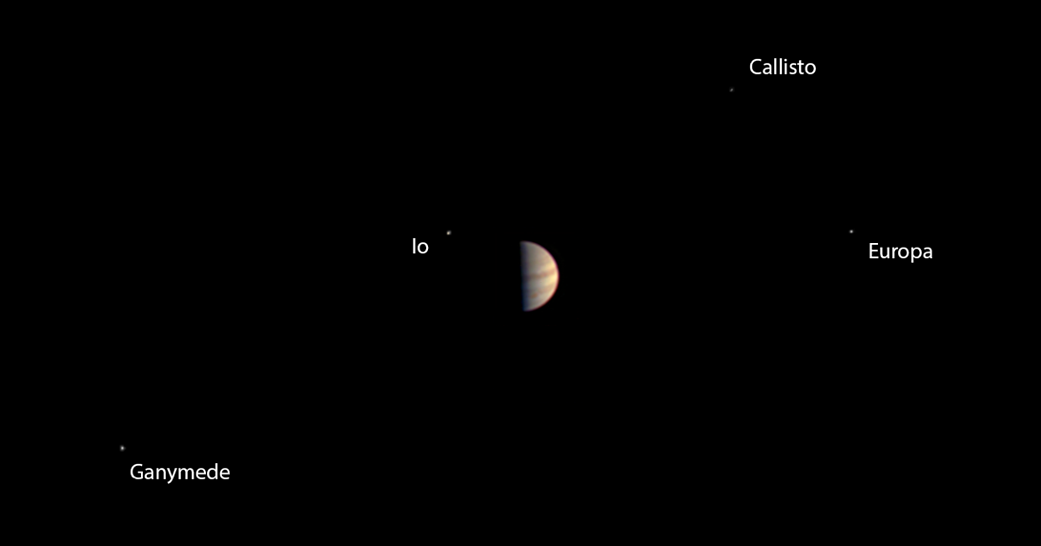 This is the last image of Jupiter taken by NASA's Juno spacecraft, as it approached Jupiter on 2016 June 29, at a distance of 3.3 million miles / 5.3 million kilometers from the Solar System's largest planet. After this photograph was taken, Juno's science .instruments were powered-down as it prepared for the difficult orbit insertion maneuver.
(Image Sources: NASA / JPL-Caltech/SwRI/MSSS)

The precarious orbit insertion maneuver occurred at the scheduled time of 11:05 p.m. Eastern Daylight Saving Time (EDT) / July 5 at 3:05 Coordinated Universal Time (UTC). However, NASA officials and scientists did not know the maneuver was successful until 11:53 p.m. / July 5 at 3:53 UTC, 48 minutes later, as the orbit insertion was accomplished by Juno's auto-pilot. This is because Jupiter is currently 48 light-minutes from Earth, and radio signals take 48 minutes to travel between Jupiter and the Earth, at this time.

Entering a highly elliptical orbit of Jupiter, which lasts for 53 days, was difficult and dangerous, as Juno had to risk Jupiter's heavy radiation belt, as well as debris orbiting the planet. This particular orbit will allow Juno to avoid Jupiter's dense radiation most of the time, but also make close investigations of Jupiter's North and South Poles as well as the Equator.

The spacecraft's nine science instruments and camera were deactivated before attempting the orbit insertion, to ensure that nothing interfered with the important engine burn; so, there are no actual photographs of the maneuver. However, the maneuver seemed to go flawlessly, when NASA's Jet Propulsion Laboratory (JPL) in Pasadena, California received confirmation that Juno had actually entered orbit around Jupiter. JPL scientists worked along-side engineers from Lockheed Martin, the primary aerospace contractor for the Juno mission.

Prior to turning-off the camera, Juno took a time-lapse video of Jupiter and some of its moons, which NASA released to the public. This video included the first mission surprise: Jupiter's moon, Callisto, appeared dimmer than expected. Juno will take further images of Callisto during the mission.

At a 1:00 a.m. EDT / 5:00 UTC, July 5, NASA / Jet Propulsion Laboratory (California Institute of Technology) media briefing, where questions were taken from both news reporters and from the public via Social Media, Juno's principal science investigator Scott Bolton announced, “NASA did it again,” regarding the tricky space maneuver. He added, "The mission team did great. The spacecraft did great. We are looking great. It's a great day." Scott Bolton does space research at the Southwest Research Institute in San Antonio.

Rick Nybakken, Juno project manager from JPL agreed saying, "The spacecraft worked perfectly, which is always nice when you're driving a vehicle with 1.7 billion miles on the odometer. Jupiter orbit insertion was a big step and the most challenging remaining in our mission plan, but there are others that have to occur before we can give the science team members the mission they are looking for."

Jupiter is one of four “gas giant” planets in the Solar System (the others being Saturn, Uranus, and Neptune), whose clouds are primarily composed of hydrogen and helium. The inner planets, including Mercury, Venus, Earth, and Mars, as well as many objects in the Asteroid Belt and Kuiper Belt (including Pluto) are rocky-type planets.

Juno has a big mission for investigating a big planet. The space probe's primary goal is to understand the origin and evolution of Jupiter, using nine major science instruments. During the mission, Juno will:

In the beginning, Juno will complete two 53-day orbits, each known as a “Perijove Pass.” Juno's scientific instruments will be turned-back-on by August 27; this is when the first close-up pictures of Jupiter are expected. On October 19, Juno's engines will change the spacecraft's orbit to a much closer 14-day orbit, where it will stay until the end of the mission in 2018, when it will have completed 37 orbits of Jupiter.

Juno will descend as close as 3,000 miles / 5,000 kilometers to the cloud-tops of Jupiter, the closest any spacecraft has come to the planet. Juno's computer and electronics are sealed in a titanium vault, to protect them from Jupiter's massive radiation. However, Juno is still expected to encounter radiation in excess of 10 million dental X-rays during the mission. Hence, the space probe can only take so much radiation before systems will begin to fail, and the mission is slated to end before the radiation destroys the computer and electronics.

The Juno spacecraft was launched from the Cape Canaveral Air Force Station in Florida on 2011 August 5. However, it did not have enough fuel to go straight to Jupiter, which is why the flight took nearly five years to travel 1.8 billion miles / 2.8 billion kilometers. Juno first went into an elliptical orbit of the Sun.

In October of 2013, Juno passed by the Earth for an Earth gravity-assist (a.k.a. “sling-shot” maneuver), which gave the spacecraft the additional energy needed to reach Jupiter. This gravity-assist gave Juno a boost of more than 8,800 miles-per-hour / 3.9 kilometers-per-second.

For the first time for a NASA mission to the outer planets, the spacecraft is powered by solar energy, rather than by a type of nuclear power (radioisotope thermoelectric generator). Solar panels are normally used for powering Earth satellites and space probes to the inner planets, which are much closer to the Sun than Jupiter. Juno's three huge solar arrays will not only provide energy, 500 watts, for powering the nine scientific instruments, but they will also be key in stabilizing the spacecraft.

Juno is the second spacecraft to orbit Jupiter. The space probe Galileo orbited Jupiter from 1995 to 2003. Eventually, NASA allowed Galileo to burn-up in Jupiter's atmosphere, to prevent it from inadvertently crashing onto one of Jupiter's moons, and subsequently contaminating the moon with bacteria from Earth. Likewise, at the end of Juno's 20-month, $1.1 billion mission, it too will burn-up in Jupiter's atmosphere, for the same reason.

The European Space Agency (ESA) plans to send a Jupiter Icy Moon Explorer space probe to the Jupiter system in 2030, with a launch in 2022. This mission is the successor to the originally proposed Jupiter Ganymede Orbiter by ESA.

NASA has also proposed an Europa Multiple Fly-By Mission, which would be launched around 2022 and include the fly-by of Jupiter's moon Europa 32 times while orbiting Jupiter, as well as landing a spacecraft on this Galilean Moon.

The spacecraft's name, Juno, comes from the NASA acronym, JUpiter Near-polar Orbiter. However, the name was also chosen because in Greco-Roman mythology, the goddess Juno was the name of the wife of the god Jupiter. And, Juno had the power to peer through clouds, created by Jupiter to hide from his wife, and learn of her husband's mischief. Likewise, the Juno spacecraft has the power to peer through the planet Jupiter's dense clouds, to learn more of the secrets of our Solar System's largest planet.


Source: Glenn A. Walsh Reporting for SpaceWatchtower, a project of Friends of the Zeiss.
2016 July 5.