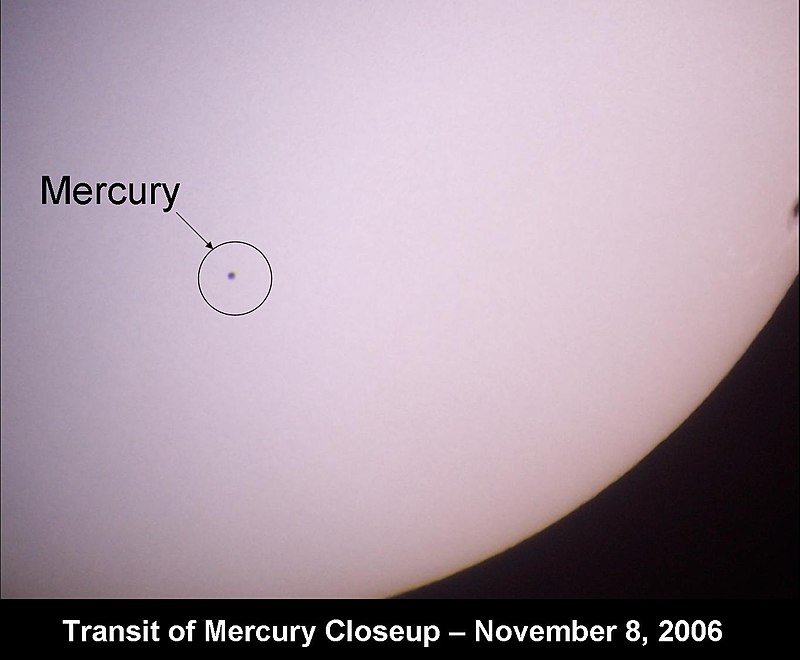 Close-up of the profile of Planet Mercury during the last Transit of Mercury event on 2006 November 8. NEVER look directly at the Sun, a solar eclipse, or a solar transit by a planet with a telescope, binoculars, or other optical device, unless you have the special training and special equipment to do so safely. Otherwise, this would cause PERMANENT BLINDNESS INSTANTLY !
(Image Sources: Wikipedia.org , By EricandHolli at the English language Wikipedia, CC BY-SA 3.0, https://commons.wikimedia.org/w/index.php?curid=6021555 )

The Transit of the Planet Mercury across the front of the Sun, a fairly rare event that will only happen 14 times this century, will occur this-Monday morning and early afternoon (2016 May 9) and will be visible throughout North America, as well as most of the rest of the planet except Australia and east Asia. Live web-casts of this event can be seen on the Internet, if there is no safe observing event in your community, or you live in one of the areas experiencing nightfall. Links to the live, Internet web-casts of this event are at the end of this blog post.

A solar transit of a planet is when the profile of the planet can be seen (using safe viewing techniques) in the daytime as it moves in front of, and across, the image of the surface of the Sun. From Planet Earth, Mercury and Venus are the only planets that can be seen transiting the Sun, as these are the only two planets closer to the Sun than the Earth.

NEVER look directly at the Sun, a solar eclipse, or a solar transit by a planet with a telescope, binoculars, or other optical device, unless you have the special training and special equipment to do so safely. Otherwise, this would cause PERMANENT BLINDNESS INSTANTLY !

NEVER look directly at the Sun or a solar eclipse with your unaided eye. This could cause MAJOR EYE DAMAGE and POSSIBLE BLINDNESS. Eye damage can occur rapidly, without any pain, as there are no nerve cells in the eyes.

In addition to safely viewing a solar transit of a planet on the Internet, sometimes scientific and educational institutions sponsor a live, safe observing opportunity of such an event for the general public, utilizing professional equipment operated by trained astronomers. Such a live, safe observing session for the public may occur at a local planetarium, astronomical observatory, science center or museum, the Astronomy and / or Physics Department at a local college or university, amateur astronomers' club, or local library.

A Solar Transit by the Planet Mercury occurs from time-to-time, but is fairly rare and difficult to see due to the small size of Mercury and the planet's great distance from the Earth.

The last two Solar Transits by Venus occurred on 2004 June 8 and 2012 June 5. In Pittsburgh, Friends of the Zeiss provided the only public observing event of the 2004 Transit of Venus in the City of Pittsburgh, in cooperation with The Duquesne Incline, using several telescopes.

For the 2012 event, Friends of the Zeiss also had telescopes available for public viewing at the Mount Lebanon Public Library in south suburban Pittsburgh. Regrettably, they were not able to use the telescopes during the 2012 event, due to cloud cover. However, the public still saw the event via a live, Internet web-cast shown in Library Conference Room A.

A live, Internet web-cast of the event will be shown in Conference Room A on the Library's Lower Level. If outdoor observation conditions are optimum, we may also try to observe the event using a 4-inch refractor telescope.

This free-of-charge event is co-sponsored by Friends of the Zeiss and the Mount Lebanon Public Library.

If we are able to use a telescope for viewing this event, we will project the image of the Solar Transit by Mercury onto a portable movie screen, for safe viewing. It is probable that while viewing Mercury crossing in front of the Sun, sunspots (most of them larger than Mercury, and some larger than Earth) will be visible on the Sun's surface. Observing the Sun with a telescope, binoculars, or any other type of optical device should only be attempted by people who have received the proper training and possess the proper equipment to do so safely.

Observing the Transit of Mercury at the Mount Lebanon Public Library will be supervised by former Buhl Planetarium Astronomical Observatory Coordinator and Planetarium Lecturer Glenn A. Walsh.

Friends of the Zeiss is a fourteen-year-old, non-profit organization with the mission to promote Astronomy, Space Sciences, and related sciences to the general public through Internet web sites and a blog, as well as public observing sessions of special astronomical events. This organization also promotes the history and preservation of Pittsburgh's original Buhl Planetarium and Institute of Popular Science, including the historic Zeiss II Planetarium Projector (prior to 2002 dismantling, oldest operable major planetarium projector in the world!) and the fairly unique 10-inch Siderostat-type Refractor Telescope (2016 is the 75th anniversary of this telescope). More information ---
Internet Web Site: < http://www.planetarium.cc >
Electronic Mail: < Jake@planetarium.cc >
Telephone: 412-561-7876.

More on a Solar Transit by Mercury: Link >>> https://en.wikipedia.org/wiki/Transit_of_Mercury

Source: Glenn A. Walsh Reporting for SpaceWatchtower, a project of Friends of the Zeiss.
2016 May 6.