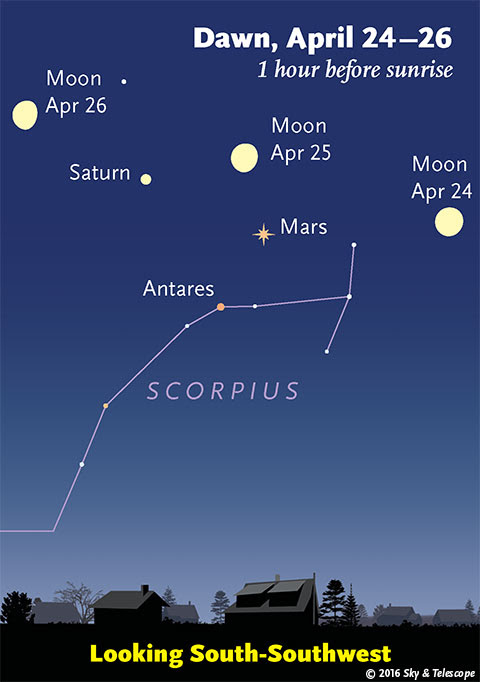 Monday and Tuesday mornings (2016 April 25 and 26), before dawn, early risers will be able to view a beautiful quasi-conjunction or celestial grouping of the Moon, two planets (Mars and Saturn), and the bright Star Antares.

Before dawn on Monday and Tuesday, this celestial grouping can be found in the south-southwestern sky.

On Monday morning the four objects will form a sort-of square or diamond with the Moon above the rest. Saturn will be to the left of the Moon, with Mars below the Moon. The bright Star Antares, which is dimmer than the two planets, can be found 5 degrees to the lower left of Mars.

On Tuesday the configuration of the planets and star remain, pretty-much the same. However, Tuesday morning the Moon can be found to the upper left of Saturn. Hence, the Moon, Saturn, and Mars create almost a straight-line, with Antares still to the lower left of Mars.

The Moon is now in its Waning Gibbous Phase, having passed Full Moon (the “Pink Moon”) early Friday morning at 1:24 a.m. Eastern Daylight Saving Time (EDT) / 5:24 Coordinated Universal Time (UTC). As a Waning Gibbous Moon, the Moon now rises very late in the evening, but is in the sky by local Midnight. So, these celestial configurations could also be seen earlier in the morning, as well.

Mars will reach its closest point to Earth, for the next two years, on May 30 at 4:00 a.m. EDT / 8:00 UTC, when Mars will have a visual magnitude of -2.1 and a light-speed distance from Earth of 4.2 light-minutes. This will be the closest Mars has been to the Earth since 2005. In two years (July of 2018), Mars will approach about the closest it ever comes to the Earth.

Saturn is somewhat dimmer than Mars at the visual magnitude of +0.3. Like Mars, it rises in the late evening, but about a half-hour later.

Both Mars and Saturn are now in retrograde motion, with Mars having begun the retrograde motion following the Mars movement becoming stationary (from normal motion) on the evening of April 16 at 10:00 p.m. EDT / April 17 at 2:00 UTC. This means that both planets can be seen, from one night to the next, moving from east to west relative to the background stars. When these planets are in normal or prograde motion, they move from west to east relative to the background stars, from one night to the next.

More on the Moon: Link >>> https://en.wikipedia.org/wiki/Moon

Source: Glenn A. Walsh Reporting for SpaceWatchtower, a project of Friends of the Zeiss.
2016 April 25