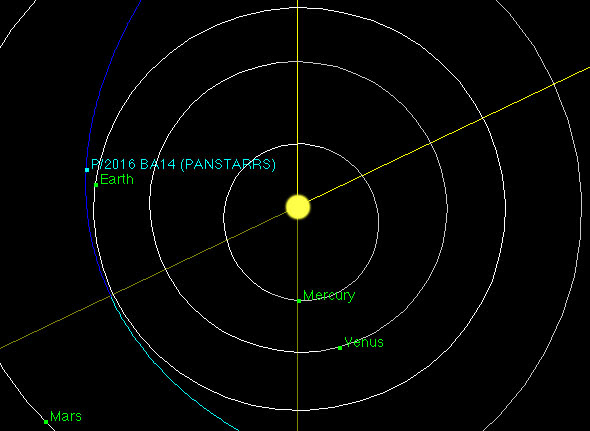 On the first two full days of Spring (March 21 and 22) two, possibly related, comets will pass very close to the Earth. The second and smaller of the two comets is predicted to become the second closest comet to ever approach the Earth.

The day before the first comet fly-by, March 20, marks the beginning of Spring. And, there is now an effort to have the day of the Vernal Equinox designated to commemorate the life of the first female astronomer, Hypatia of Alexandria, in ancient Egypt.

This will be the first time two comets have come close to the Earth only a day apart. Scientists are eagerly awaiting their arrival, hoping to learn much more about the nature of comets. In fact, the Hubble Space Telescope and several ground-based telescopes will be used to watch these two comets as they fly by our planet.


The first of the two comets, Comet 252P / LINEAR, will probably be the brightest comet, but it will not come the closest to Earth. This comet will come within about 3.3 million miles / 5.3 million kilometers of our planet on March 21, which will still make it one of the ten closest comets to ever approach the Earth. But, this is not real close, considering that the Earth's Moon, on average, is 238,855 miles / 384,400 kilometers from our planet.

During the last weeks of March, Comet 252P / LINEAR will be primarily visible in the Southern Hemisphere—perhaps even naked-eye visibility, but only away from city lights. In North America, binoculars will probably be needed to see this comet, but, again, you need to be away from city lights. And, remember such observations are always weather-permitting. At the end of this blog post there will be a link to an article from Sky and Telescope Magazine, which includes two star charts for finding this comet during the last weeks of March and the beginning of April.

This comet was not expected to be this bright, but amateur astronomers have noticed it brightening more rapidly than expected. According to University of Maryland's Matthew Knight, Comet 252P / LINEAR has a bright emerald-green color, from carbon gas emanating from the comet.


The second comet, trailing Comet 252P / LINEAR, was quite a surprise. At first they thought this object was an asteroid, until Matthew Knight discovered the object had a tail. Designated Comet Pan-STARRS P / 2016 BA14, both comets seem to have the same path through the Solar System. Hence, it is conjectured that both comets may have originated from the same single comet.

On March 22 at about 12:00 Noon Eastern Daylight Saving Time (EDT) / 16:00 Coordinated Universal Time (UTC) Comet P / 2016 BA14 is expected to become the second closest comet to ever approach Earth, when it comes within 2.1 mllion miles / 3.4 million kilometers of Earth. However, despite coming closer to Earth, this comet is dimmer, and a telescope will be needed to see it.

Lexell's Comet was the closest comet to ever approach the Earth. This comet came within 1.4 million miles / 2.2 milion kilometers of our planet on 1770 July 1. Although actually discovered by famous astronomer Charles Messier, it became popularly known as Lexell's Comet after the comet's orbit was calculated by astronomer and mathematician Anders Johan Lexell.

For a time during the 20th century, the Comet of 1491 was considered the closest comet to ever come near the Earth, at 873,784 miles / 1,406,219 kilometers from the Earth. However, Japanese researcher Ichiro Hasegawa, of the Faculty of Socio-Cultural Studies at Otemae University retracted this claim in 2002, saying "The orbital elements for Comet 1491 II = C / 1491 B1 (Hasegawa 1979) are to be retracted, because the records of this comet were misunderstood."


The season of Spring, in Earth's Northern Hemisphere, begins at the Vernal Equinox: early Sunday Morning, 2016 March 20 at 12:30 a.m. EDT / 4:30 UTC --- the time of the posting of this blog post. And this year, Spring begins on Palm Sunday, the beginning of Holy Week in the Christian faith.

In the Southern Hemisphere, this marks the astronomical beginning of the season of Autumn.

The Vernal Equinox is also the first day of the National Cherry Blossom Festival held each year in Washington, DC. This festival commemorates the 1912 gift of 3,000 cherry trees from the Mayor of Tokyo to the City of Washington. The festival runs through April 17 this year.

Physicians have declared the first week of Spring as Medicine Cabinet Clean-Up Week. They urge families, as part of their annual Spring cleaning, to clean-out the medicine cabinet of old and expired pharmaceuticals which are no longer being used. This would prevent other family members from using these old drugs by accident, or the beginning of drug abuse.


Astronomical historian Ari Belenkiy, who just finished an academic paper on the life and death of the first female astronomer, Hypatia of Alexandria, has started an effort to have the day of the Vernal Equinox, March 20, designated as a day commemorating Hypatia's life.

Hypatia was a Greek astronomer, mathematician, and philosopher, daughter of the mathematician Theon Alexandricus, who lived in Alexandria, Egypt during the late 4th and early 5th centuries. At that time Alexandria was part of the Eastern Roman Empire, which had a great rivalry with the Church of Rome. This led to deep divisions in Alexandria.

Due to the fog of time, there is much dispute regarding the events surrounding the death of Hypatia. According to the Church historian Socrates Scholasticus, a clique of Bishop Cyril's zealots killed Hypatia, due to a deep conflict between the Governor and Bishop of Alexandria. Hypatia's astronomical calculations regarding the date of Easter may have set the mob against her.

Although none of Hypatia's writings survive, she is reported to have made significant academic contributions in the fields of Astronomy and Mathematics.

Sky and Telescope Article with Star Charts for Finding Comet 252P / LINEAR (one star chart is half-way down the page; another star chart is near the end of the article):
Link >>> http://www.skyandtelescope.com/observing/p2016-ba14-closest-comet-in-almost-250-years03162016/

More on the Season of Spring: Link >>> https://en.wikipedia.org/wiki/Spring_%28season%29

More on the Gregorian Calendar Reform of 1582:
Link >>> https://en.wikipedia.org/wiki/Gregorian_calendar

More on the petition to designate March 20 to commemorate the life of Hypatia:
Link >>> https://www.change.org/p/canada-s-parliament-commemorating-the-first-female-astronomer-hypatia-of-alexandria


Source: Glenn A. Walsh Reporting for SpaceWatchtower, a project of Friends of the Zeiss.
2016 March 20.