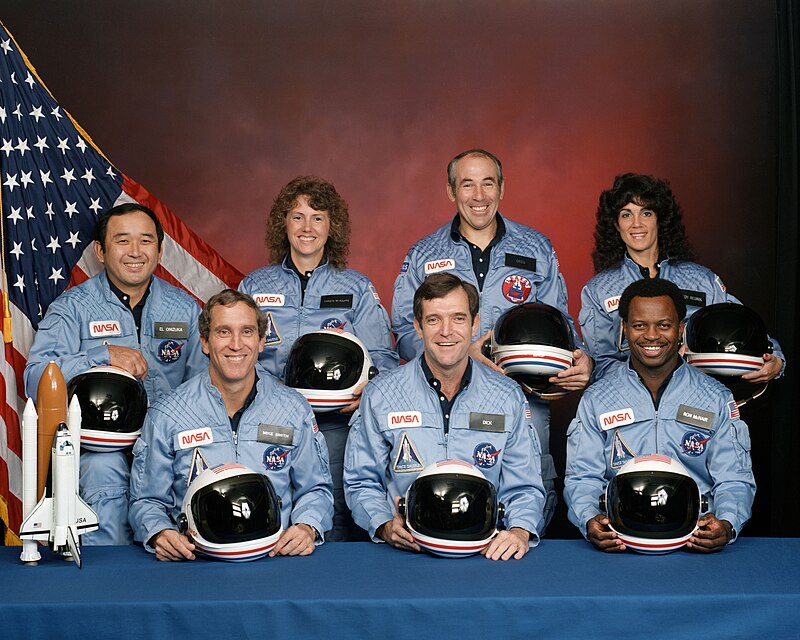 It was the second of three major tragedies where NASA astronauts died during, or in preparation for, a space mission. In a cruel irony, all three tragedies occurred within one week of the calendar ---

1967 January 27: Fire in the Command Module of Apollo 1, which killed three astronauts while they were preparing for the launch of the first manned Apollo mission: Virgil “Gus” Grissom, Ed White (first American to walk in space in 1965), and Roger Chaffee.


Originally, the Mission STS-51-L had been scheduled to launch on 1986 January 22 at 2:42 p.m. EST / 19:42 UTC. However, a series of delays, due to a conflict with the launch of a previous mission (Mission STS-61-C on Space Shuttle Columbia, which had launched just 10 days earlier), poor weather conditions, and technical problems with the spacecraft's exterior access hatch, led to the launch on the morning of 1986 January 28.

Shortly after the January 28 launch of the Space Shuttle Challenger, an O-ring seal in the right solid rocket booster failed, which led to the escape of burning gas from within the rocket motor. This damaged the solid rocket booster and caused a structural failure of the large external fuel tank. .

Then, aerodynamic forces broke-up the spacecraft, which fell into the Atlantic Ocean with the crew members. A crew escape system had not been included with the design of the Space Shuttle.

U.S. President Ronald Reagan addressed the nation on radio and television that evening, regarding the disaster. He appointed a blue-ribbon commission, the Rogers Commission, to investigate the accident. NASA did not return to flying the Space Shuttle in space for 32 months.

When the Rogers Commission Report was released, on 1986 June 9, the findings included:

Some people speculate that, since President Reagan had planned to speak to the American people on the evening of January 28 anyway (the annual State of the Union address before the U.S. Congress), and wished to mention the successful launch with the first Teacher-in-Space (launching a Teacher-in-Space as the first citizen astronaut had been President Reagan's idea), NASA management had an extra incentive to go-forward with the launch.

This particular mission had been more closely followed by the American people than other Space Shuttle missions due to the launch of New Hampshire school teacher Christa McAuliffe as the first Teacher-in-Space. This included special viewings by school children of the launch in schools, planetaria, and Science museums throughout the country.

At Pittsburgh's original Buhl Planetarium and Institute of Popular Science (a.k.a. Buhl Science Center), Public Relations Director Jo Lee arranged for school children, from the nearby St. Peter's Elementary School, to view the launch of the Space Shuttle Challenger with the first Teacher-in-Space, live, in Buhl's Little Science Theater / Lecture Hall. A satellite dish received the “NASA Select” satellite television channel, which was shown on the Lecture Hall's large projection screen. The previous week, Buhl had shown images, to the general public, from Voyager 2's encounter with Planet Uranus via “NASA Select.”

In addition to these school children, approximately 20 Buhl staff members, some with their children, also assembled that Tuesday morning in the 250-seat Little Science Theater to view this launch (at this time, Buhl Planetarium did not open to the general public until 1:00 p.m. on weekdays). While the Cable News Network (CNN) broadcast the launch live, none of the major broadcast television networks interrupted normal programming for coverage of this launch (except on the West Coast, when the network morning news programs were still airing).

After the spacecraft broke-apart, for a couple minutes no one watching the transmission knew what was happening, as there was unusual silence on “NASA Select.” It was when Buhl staff member Glenn A. Walsh quickly obtained his portable, transistor radio that the staff learned what had happened.

Recollection of Challenger Tragedy from the West Coast:
Link >>> http://buhlplanetarium2.tripod.com/bio/2006ChallengerBuhl.htm#noreen

Source: Glenn A. Walsh Reporting for SpaceWatchtower, a project of Friends of the Zeiss.
2016 January 28.