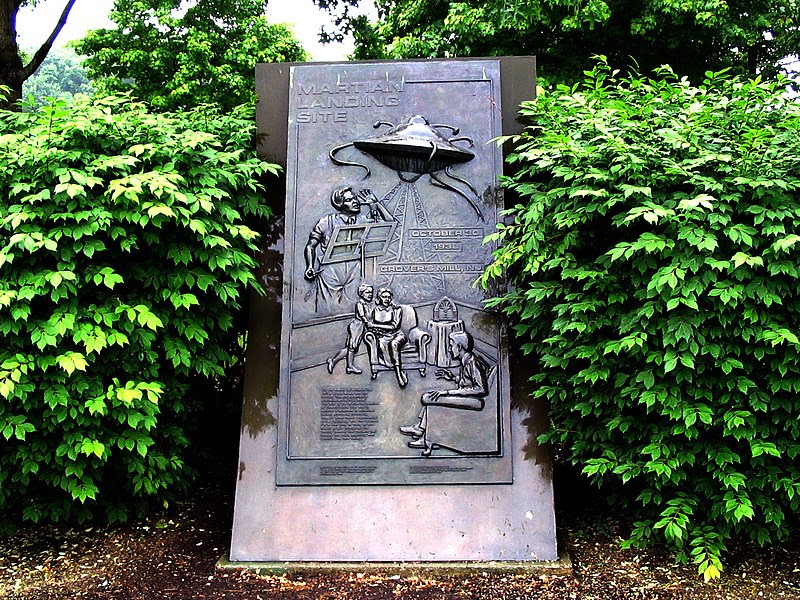 Photograph of monument at the supposed landing site of a 1938 Martian invasion in Grovers Mill, New Jersey. (Image Source: Wikipedia.org )

By Vince Farinaccio, The Grapevine Newspaper

Grovers Mill today has few landmarks to remind of its infamy of 77 years ago.

Anyone traveling through Grovers Mill, New Jersey today might be underwhelmed by the unassuming nature of this hamlet nestled in the rural confines of West Windsor Township. The Martians that landed here 77 years ago have long since met their demise from the Earth’s germs, and the radio broadcast that carried the details of their landing has been forgotten by many of the residents here and elsewhere. But reminders of the infamous Orson Welles Mercury Theater radio show of H.G. Wells’ War of the Worlds are still scattered throughout the area as a vestige to the village’s claim to fame.

The site of Van Nest Park, established in 1962 near Grovers Pond, isn’t considered the actual landing site of the Martians, but it contains the story of the broadcast for anyone unfamiliar with the historic event. According to The New York Times, it took half a century after the broadcast to unveil a monument to the event:

“To mark the 50th anniversary of the faux invasion in October 1988, the town held a three-day festival with costume contests, a parade, a bike race and fireworks. At that time, a plaque depicting Orson Welles, a spaceship and frightened radio listeners was installed in Van Nest Park, next to Grovers Pond.”