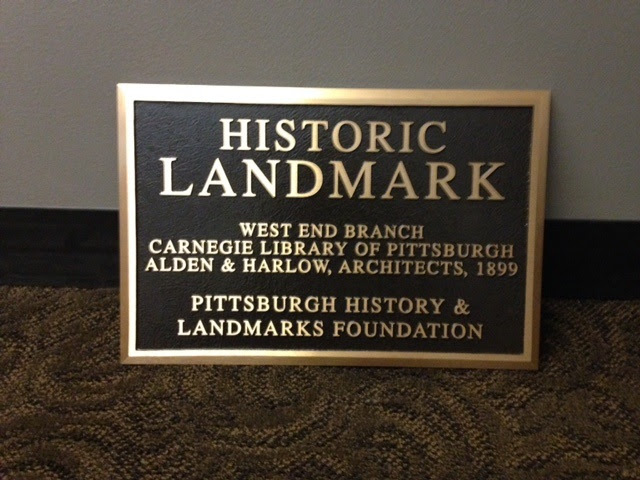 Saturday Afternoon (2015 September 19) at 1:00 p.m. Eastern Daylight Saving Time (EDT) / 17:00 Coordinated Universal Time (UTC), a historic plaque will be officially unveiled on the facade of the West End Branch of The Carnegie Library of Pittsburgh, 47 Wabash Street at Neptune Street, in Pittsburgh's West End Valley. This honor has been conferred to the Library, and the plaque provided, by the Pittsburgh History and Landmarks Foundation.

The West End Branch of Carnegie Library, which was dedicated on the evening of 1899 January 31 and opened to the general public the next day, is the second neighborhood branch library to open as part of what was originally known as The Carnegie Free Libraries of the City of Pittsburgh. The first neighborhood library branch opened in Lawrenceville a year earlier, and the Main Branch Library in the city's Oakland Civic Center opened in 1895.

The only older library branch in the city of Pittsburgh was the Allegheny Regional Branch on Pittsburgh's North Side, which was located across the street from Pittsburgh's original Buhl Planetarium and Institute of Popular Science. It was originally the main library for the independent city of Allegheny City (where industrialist and philanthropist Andrew Carnegie grew-up), and was originally called the Carnegie Free Library of Allegheny which opened in 1890. After damage occurred to the historic building in 2006, due to a lightning strike on the Library's historic clock-tower, the library moved to a new building a few blocks away. However, the historic library building was repaired and may soon be reused by the Children's Museum of Pittsburgh (which is currently operated in other nearby historic buildings of the Old Allegheny Post Office and The Buhl Planetarium and Institute of Popular Science).

Andrew Carnegie was particularly interested in the erection of neighborhood branch libraries, which he felt would more easily reach the citizens in their neighborhoods. In his letter to the Mayor and City Councils on 1890 February 6, Andrew Carnegie offered library buildings (including a library building in the Temperanceville section of the City, now better known as the City's West End Valley) to the City and said, “All of these should be thoroughly fireproof, monumental in character and creditable to the city.” Andrew Carnegie provided these wonderful buildings to be monuments of literacy and learning for each of these neighborhoods, each to be recognized by the people as a special place where a person can improve their lot in life.

The West End Branch of The Carnegie Library of Pittsburgh is most notable as home of the world's first library story-time for children. Shortly after the West End Library opened, Children's Librarian Charlotte Keith was looking for a way to have children become more interested in reading. At this time, an educational movement to start kindergartens was underway, and kindergarten teachers would read stories to the young children. Miss Keith decided to do the same thing at the West End Library.

The library story-time was a success, and soon many other libraries started library story-times. This included several other Pittsburgh libraries and the Buffalo Public Library that same year, followed by libraries in Boston, Chicago, New York City, and Cleveland. Today, nearly every library has a story-time for children, and it all began at the West End Branch of The Carnegie Library of Pittsburgh.

The West End Branch of The Carnegie Library of Pittsburgh was designated a City-Designated Historic Structure by the City of Pittsburgh, by a unanimous vote of Pittsburgh City Council on 2004 July 14. This Library had been nominated for this designation by the Pittsburgh History and Landmarks Foundation. The West End Library was one of five branch libraries (also including branch library buildings in Hazelwood, Homewood, Lawrenceville, and Mount Washington) the History and Landmarks Foundation found was eligible, and thus nominated, for this designation. The Main Library, Allegheny Regional Branch, and South Side Branch had already received this designation.

On 2014 May 17, the West End Library reopened after being closed for several months for a major rehabilitation of the historic building. The $1.7 million renovation included a new slate roof, an elevator, air-conditioning, and refurbished windows.

More about the historic West End Branch of The Carnegie Library of Pittsburgh:
Link >>> http://andrewcarnegie.tripod.com/cfl.html#westend

Public Statement of Glenn A. Walsh, before Pittsburgh City Council, in support of the West End Branch of The Carnegie Library of Pittsburgh receiving historic designation:
Link >>> http://andrewcarnegie.tripod.com/clpgh/ST-DesgWestEnd.htm

"Pittsburgh History & Landmarks Honors CLP-West End Library."
Green Tree Times 2015 October:13.
The Friends of the Library were instrumental in applying for the plaque from the Foundation, especially Library Friend, Glenn Walsh, whose research and diligence paid off in the form of this very special recognition.
Link >>> http://andrewcarnegie.tripod.com/clpgh/west_end/phlfplaque.html