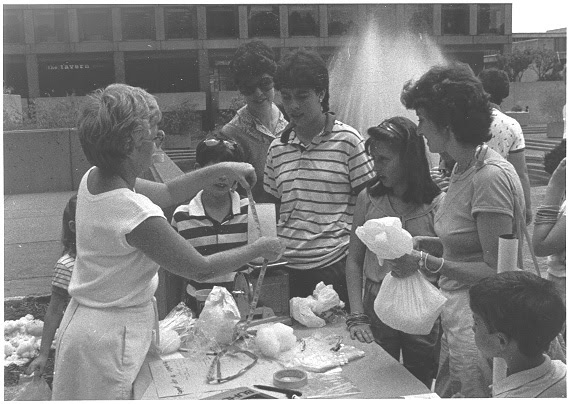 The first day of Summer, which coincides with Father's Day this year, begins early this afternoon, and again this year, snowballs will be flying in Pittsburgh! Pittsburgh's Carnegie Science Center continues a tradition that started thirty years ago at Pittsburgh's original Buhl Planetarium and Institute of Popular Science, then known as Buhl Science Center.

Summer officially begins at the moment of the Summer Solstice, 12:38 p.m. Eastern Daylight Saving Time (EDT) / 16:38 Coordinated Universal Time (UTC) on Sunday Afternoon, 2015 June 21. Due to the constant 23.4-degree inclination of Earth's axis relative to sunlight falling on its surface, the June Solstice is the only moment of the year when the Earth's North Pole is tilted the full 23.4 degrees towards the Sun.

In a news article in the Pittsburgh Post-Gazette in January of 1985, the public had been alerted to save snowballs in their freezer for this special event. And, the public responded.

According to Jo Lee, Buhl Science Center Public Relations Director, more than 1,200 snowballs were brought to the Science Center that Friday afternoon (1985 June 21), from locations throughout Western Pennsylvania including Hastings in Cambria County. Even a 3 1/2-foot snowman (actually called a snowwoman, by the girls who saved it and brought it to Buhl), complete with red and blue striped bathing suit, sunglasses, and straw hat, from Leechburg, Armstrong County, was assembled on the Allegheny Square Plaza outside of the Science Center's entrance!

Other activities in 1985's fourth annual Solstice Day event included cooking hot dogs by solar energy, in two large steel bowls. The hot dogs would cook at the focal point of the Sun's energy in the solar cooker, while the metal exterior of the cooker remained cool. There was also a sunrise / sunset photographic contest, and children could make their own home-made sundials to take home with them.

This was the only free admission event of the year sponsored by the Buhl Science Center. Ms. Lee emphasized that this type of event was to show young people that Science can be fun! But, Science also means that the snowballs were weighed, measured, and a teacher showed the children how to test a melted snowball for acidity. There were also contests for the largest snowball, smallest snowball, and the most number of snowballs. And, there was the "Great Melt-off, the slowest race Pittsburgh ever had," where snowballs were timed melting in the day's sunny, 76-degree Fahrenheit heat.

A year later, after successful lobbying by the author (Buhl staff member Glenn A. Walsh), Buhl resumed evening hours on Friday evenings until 9:30 p.m. ET, with the addition of Buhl's Astronomical Observatory remaining open on Friday evenings until 10:30 p.m. ET, weather-permitting, year-round. Except for laser shows and the popular four-month (November through February) exhibition of the Miniature Railroad and Village, year-round evening hours Thursday through Sunday had been eliminated in 1984.

The tradition of bringing snowballs for Summer "Solstice Day" continued until Buhl Science Center closed as a public museum on 1991 August 31. The Carnegie Science Center resumed this tradition, beginning with the Summer Solstice of 2007.