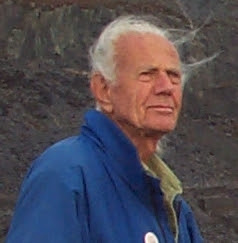 Yesterday morning (January 15), Amateur Astronomy popularizer and inventor of the Dobsonian Reflector Telescope, John L. Dobson, passed-away at the age of 98 in Burbank, California. He was born in Beijing, China in 1915, where his maternal grandfather had founded Peking University in 1898.

Perhaps next to Carl Sagan, John Dobson is one of the persons most responsible for making Astronomy more accessible to the general public. He co-founded the San Francisco Sidewalk Astronomers in 1967 which, in lieu of formal membership meetings, club members would simply set-up telescopes on the city sidewalk for passers-by to view the heavens and learn more about Astronomy. Interestingly, one of the co-founders of the new club, Bruce Sams (who had built his own large telescope) was only 12 years-old, making him too young to join the San Francisco Amateur Astronomers; hence, the new club was a necessity.

Of course, John Dobson is best known for developing a simple-to-build, large, and low-cost reflecting telescope, which became known as the Dobsonian Telescope. John Dobson hesitated to take credit for the new telescope design, as he said that the simple design was all that he needed.

A Dobsonian Telescope is an altitude-azimuth mounted Newtonian telescope, constructed with low-cost items such as plywood, formica, PVC closet flanges, cardboard construction tubes, recycled porthole glass, and indoor-outdoor carpet. While good quality telescopes of the 1960s, when the Dobsonian Telescope was first designed, often cost over a thousand dollars in today's dollars, John Dobson could teach someone to build a Dobsonian for a small fraction of that amount.

Pittsburgh's original Buhl Planetarium and Institute of Popular Science (a.k.a. Buhl Science Center) purchased a 13-inch Dobsonian Reflector Telescope in the Autumn of 1985, to assist in public viewing of the 1985-1986 apparition of Halley's Comet, during Buhl's "Halley Watch" program. As the primary telescope in Buhl's third-floor astronomical observatory, a rather unique 10-inch Siderostat-type Refractor Telescope, was limited in the amount of sky that could be viewed, the Dobsonian was used on the open-air east and west wings of the Observatory when Halley's Comet was not high enough in the sky to be viewed by the Siderostat Telescope.

Although, at this time, Buhl Planetarium's third floor Observatory was not accessible to wheelchairs [visitors had to climb steps to reach the second and third floors], on a couple occasions when a wheelchair patron wished to view the Comet, several staff members and volunteers simply carried the patron, wheelchair and all, up the steps to the Observatory. Regular weekly, evening public observing sessions [every Friday evening (7:30 p.m. to 10:30 p.m., following the 7:00 p.m. planetarium show), weather-permitting, year-round] in Buhl Planetarium's Observatory were restored, after an absence of several years, about a month [1986 June 13] following the conclusion of the "Halley Watch."