NASA Space Shuttle Simulator to Open to Public in Houston 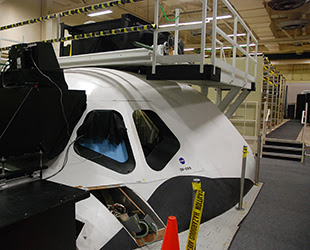 August 15, 2012 — As NASA has been getting ready its retired space shuttles to set sail for their museum homes, the agency has also been quietly preparing its least known orbiter vehicle to stay in place.

The SAIL — or Shuttle Avionics Integration Laboratory — is set to become the newest stop on tours of the Johnson Space Center in Houston this fall.

The once fully-functional space shuttle simulator, which was used throughout the 30-year program to develop and test the flight software for each of the 135 missions, was designated an honorary part of the fleet with its own orbiter vehicle (OV) number.

Space shuttle Discovery, which is now on display at the Smithsonian in Virginia, was also referred to by NASA as OV-103. Enterprise, the original shuttle prototype, which is now exhibited at the Intrepid Sea, Air & Space Museum in New York City, was similiarly OV-101.