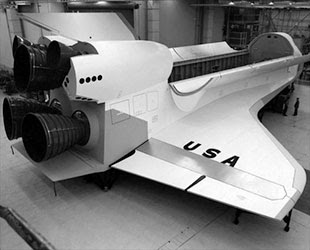 June 25, 2012 — Before Columbia launched on the first space shuttle mission over 30 years ago, before Star Trek fans campaigned to rename the prototype shuttle after the Starship Enterprise and even before the last of the Apollo astronauts left their bootprints on the moon, there was a full-size space shuttle in Downey, California.

That mockup, largely overlooked until recently, still exists and is about to go on public display near where it was first built in 1972.

The mostly wood and plastic model was created by North American Rockwell (now Boeing) as part of the company's bid to build the space shuttle for NASA. After winning the contract, the company kept the 122 foot long by 35 foot tall (37 by 11 meter) mockup at their Downey assembly facility where it served as a fit check tool for instruments and payloads being built for the real orbiters.

The one-wing model — its left wing and part of its vertical stabilizer, or tail, was removed after its debut — remained in Rockwell's design and engineering room for more than 30 years, practically the same amount of time as the real shuttles flew. The mockup doubled as a public relations and visual aid during congressional and astronaut visits.