The long-term goal is to print a functioning spacecraft in a seemingly weightless environment
By Jeremy Hsu and InnovationNewsDaily  | December 8, 2011 | 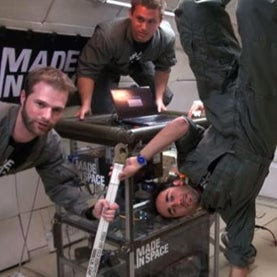 Image: Made in Space, Inc.


Launch $1-billion-worth of spare parts to the International Space Station, and you can keep Earth's orbital outpost going for another decade. Send up some 3D-printing devices, and you invest in the ability to build everything on demand in space: space-station parts, astronaut tools, satellites, even spacecraft.
A first step toward space factories may come from NASA's recent selection of a U.S. startup's proposal to build a 3D printer for the space station. Such printing technology could build any number of objects, layer by layer, based on designs uploaded from mission control. Astronauts would only need "feedstock" material, such as plastic or metal, to make new tools or spare parts on the fly.