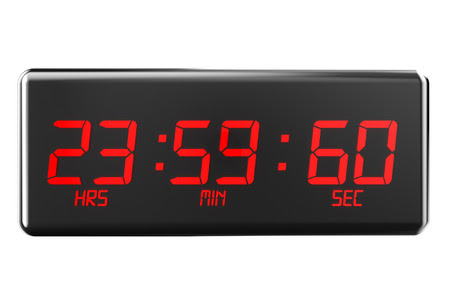 Every four years (usually), the calendar year is longer by 24 hours than the previous three years. However this Leap-Year of 2016 will be even longer, by one second, with the addition of a Leap-Second at the very end of the year as determined by Coordinated Universal Time (UTC).

On July 6, the U.S. Naval Observatory in America (after a decision made by the International Earth Rotation and Reference Systems Service) announced that a Leap-Second would be added to the civil time scale on Saturday Evening, 2016 December 31 at 23:59:60 Coordinated Universal Time (UTC) / 6:59:60 p.m. Eastern Standard Time (EST). Leap-Seconds are added, occasionally when needed, at either the end of June or the end of December, or both.

Coordinated Universal Time (sometimes referred to as Greenwich Mean Time or Greenwich Civil Time), an international time scale used by most of the world's scientists, is configured to begin the day at the Prime Meridian at the Royal Greenwich Observatory (commissioned by King Charles II in 1675) in Greenwich, England, five miles southeast of central London. This is the legacy of the time several centuries ago when Great Britain was the world's foremost seafaring power.

Currently, the Earth's rotation rate, measured as UT1 (Universal Time-1 - Mean Solar Time at the Prime Meridian in Greenwich, England), is behind scientists' more consistent UTC [derived from International Atomic Time (TAI), determined by atomic clocks] by four-tenths of a second (clock correction known as DUT1, which is UT1 minus UTC). So, for the civil time scale to stay more consistent with the Earth's rotation rate, a Leap-Second is needed to slow down UTC by one second.

Once the Leap-Second takes effect (at 23:59:60 UTC on Saturday, 2016 December 31), this would make the Earth's rotation rate in advance of UTC by six-tenths of a second. Then, it may take a couple years for the Earth to slow down enough, to the point where UT1 would again be behind UTC and another Leap-Second would be needed. UTC is never allowed to advance more than nine-tenths of a second ahead of UT1, although usually a Leap-Second is added long before that could happen.

Leap-Seconds have proven to be a problem for computers. Hence, in 2005 there was a proposal to eliminate Leap-Seconds, possibly replacing them with Leap-Hours as a way to keep the civil time scale in-sync with the Earth's rotation rate. However, this issue has been quite controversial among scientists and government officials, so the decision to make any change has been delayed.

Precise time signals, which will include the Leap-Second on December 31 as well as the daily DUT correction, are now provided by government agencies via radio, telephone, and the Internet. This includes agencies such as the U.S. Naval Observatory (USNO), National Institute of Standards and Technology (NIST) [originally known as the National Bureau of Standards (NBS)] of the U.S. Department of Commerce, and the National Research Council (NRC) of Canada. Earlier in the 19th century, the Allegheny Observatory in Pittsburgh provided precise time signals to the railroads and some cities via the telegraph.

Radio time signals, with voice announcements each minute, are provided by three short-wave radio stations in North America: WWV in Fort Collins, Colorado and WWVH in Kekaha, Kauai, Hawaii, both operated by the National Institute of Standards and Technology, and CHU in Ottawa, Ontario, operated by the National Research Council of Canada. Radio-controlled clocks automatically receive the precise time from NIST-operated, long-wave radio station WWVB in Fort Collins, Colorado.

More on precise time via telegraph in the 19th century, from Pittsburgh's Allegheny Observatory:
Link >>> http://spacewatchtower.blogspot.com/2016/03/some-states-to-abandon-daylight-saving.html


Source: Glenn A. Walsh Reporting for SpaceWatchtower, a project of Friends of the Zeiss.
2016 December 27.