Large Comet to Pass Earth in July; Another in May 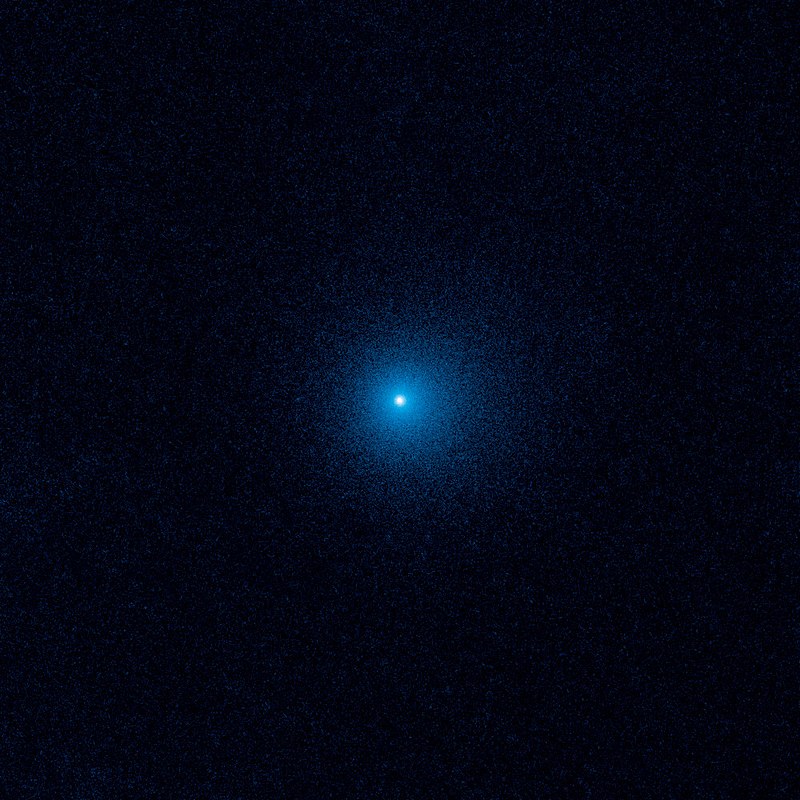 Coma surrounding Comet C/2017 K2 PANSTARRS (K2) as imaged in June of 2017 by the Hubble Space Telescope, when the comet was 1.49 billion statute miles / 2.4 billion kilometers from the Sun, just beyond the orbit of planet Saturn.

A large comet, visible with a telescope for up to four months later this year, is expected to pass the Earth in July and approach the Sun in December. Using the Hubble Space Telescope's Wide Field Camera 3 at the end of 2017 June, researchers said this was the farthest active, inbound comet yet observed.

Another comet should be visible with binoculars and telescopes in May.

Comets, which are composed mostly of rock and ice (sometimes referred to as “dirty snowballs”), are usually only a few miles across. Unlike most planets or asteroids, comets often have long eccentric orbits, stretching far into a section of the Outer Solar System known as the Oort Cloud. Often, as a comet gets closer to the Sun, a tail of debris from the comet can be seen pointing away from the Sun.

It is thought that most comets originate in the Oort Cloud, way beyond the orbit of the planet Neptune (now recognized by the professional astronomical community as the farthest major planet in our Solar System) and an area known as the Kuiper Belt where many asteroids exist (now considered a Dwarf Planet, Pluto is also located in the Kuiper Belt). Spherically shaped and almost a light-year in diameter, the Oort Cloud contains remnants from the formation of the Solar System 4.6 billion years ago.

A comet discovered in July of 2021 using the Panoramic Survey Telescope and Rapid Response System (Pan-STARRS) may become a binocular object this Spring. Astronomers believe this comet may be fairly large, and, hence, could be fairly bright, as it seemed to have a fairly compact coma at the time of discovery.

Comet C/2021 O3 seems to be fairly new to the Inner Solar System. It may have a hyperbolic orbit, so that after it passes the Sun, it travels back to the Outer Solar System, never to return. Or, as this comet goes around the Sun at an estimated distance of 26.6 million statute miles / 42.8 million kilometers (closer to the Sun than planet Mercury), the comet may simply disintegrate as many comets do.

Comet C/2021 O3 should be visible to telescopes, and perhaps binoculars, by late April and early May; visibility by the unaided eye (one-power) is not likely. Estimates of Apparent Visual Magnitude for this comet range from 9 to 6. So, this comet may (or may not) appear somewhat "bright" in a telescope, but it probably will not be visible with the unaided eye.

Assuming the comet survives the approach with the Sun, May visibility, possibly with small amateur telescopes, will be best from May 3 to 7. At that time, the comet will be close to the northwestern horizon after sunset (hence, an unobstructed view of the horizon will be necessary to see this comet), in front of the constellation Perseus the Hero.

Internet link to finder charts for this comet can be found near the end of this blog-post.

Designated Comet C/2017 K2 (PANSTARRS), often simply referred to as “K2”, this comet was discovered between the orbits of the planets Uranus and Saturn on 2017 May 21 by the Panoramic Survey Telescope and Rapid Response System (Pan-STARRS) in Hawaii. It is being studied by Dr. David Jewitt of the University of California, Los Angeles and his colleagues.

K2 has a nucleus probably much larger than most comets. This comet has a diameter estimated to be 18 to 100 statute miles / 29 to 161 kilometers, from observations made by the Canada-France-Hawaii Telescope. However, earlier, the Hubble Space Telescope had estimated the nucleus diameter may be 12 statute miles / 19.3 kilometers or even less.

The scientists have found that a coma or gaseous envelope surrounds the core of the comet. This cometary atmosphere has a diameter of 81,000 statute miles / 130,000 kilometers.

This seems to be K2's very first trek to the Inner Solar System. Scientists believe K2 may be one of the most primitive comets ever observed.

Most comets are not first observed until they are fairly close to the Sun, such as the orbit of planet Jupiter. At this point, usually the elements and compounds on the comet's surface are already burned-off by solar radiation.

However, K2 was discovered beyond the orbit of planet Saturn, due to the large size of this comet. Hence, the elements and compounds on the surface have remained, since this comet came into existence near the time of the Solar System's formation.

Now that the comet is approaching closer to the Sun, these elements and compounds, including frozen volatile gases such as oxygen, nitrogen, carbon dioxide, and carbon monoxide, are heating-up and forming the coma. Water on the surface remains frozen hard, as the comet is still too far from the Sun for evaporation or sublimation of the water.

K2 will pass the Earth on July 14 and the comet's closest approach to the Sun will occur on December 19. The comet should be visible in small telescopes (best observed from a site away from city lights) approximately from June to September in the Northern Hemisphere; visibility by the unaided eye (one-power) is not likely. By mid-September, the comet becomes closer to the horizon and will be best viewed from the Southern Hemisphere.

However, only the K2 coma will be visible as a very diffuse or fuzzy patch of light; the coma is actually one of the largest of any comet. An astronomical technique known as Averted Vision, using the peripheral vision by looking a little off to the side, may be most effective in viewing such a diffuse object.

Internet link to finder charts for this comet can be found near the end of this blog-post.

Yet, another comet due in 2031 is described as a “Mega-Comet”, possibly the largest comet ever discovered. The actual size of this comet, officially designated as C/2014 UN271 (Bernardinelli-Bernstein), is not yet specifically known, but it is believed to be between 62 and 230 statute miles / 100 to 370 kilometers in diameter, possibly as large as a Dwarf Planet !

Comet Bernardinelli-Bernstein was discovered in October of 2014 by University of Pennsylvania astronomers Pedro Bernardinelli and Gary Bernstein, after reviewing archival images from the Dark Energy Survey (DES). At the time of the image, the comet was 29 Astronomical Units / 2.7 billion statute miles / 4.3 billion kilometers from the Sun. Hence, the comet was almost as far from the Sun as the planet Neptune, the farthest major planet of our Solar System. Right now, the comet is still too far to find with anything but a large, research-grade telescope.

The reason scientists believe this comet is so large is because comets are not, and usually cannot be, discovered this far out in the Outer Solar System. As comets can only reflect sunlight, and do not shine by their own energy, this new comet must be huge to be found by telescopes that far away from the Sun.

Comet Bernardinelli-Bernstein is only expected to come as close to the Sun as the orbit of planet Saturn (about 9.5 times farther from the Sun than the Earth's orbit), before heading back out to the Oort Cloud. This Perihelion for the comet should occur on 2031 January 21.

* Other Walsh Authored Blog & Web-Sites: Link >>> https://buhlplanetarium.tripod.com/gawweb.html
Posted by Friends of the Zeiss at 12:00 AM 1 comment: 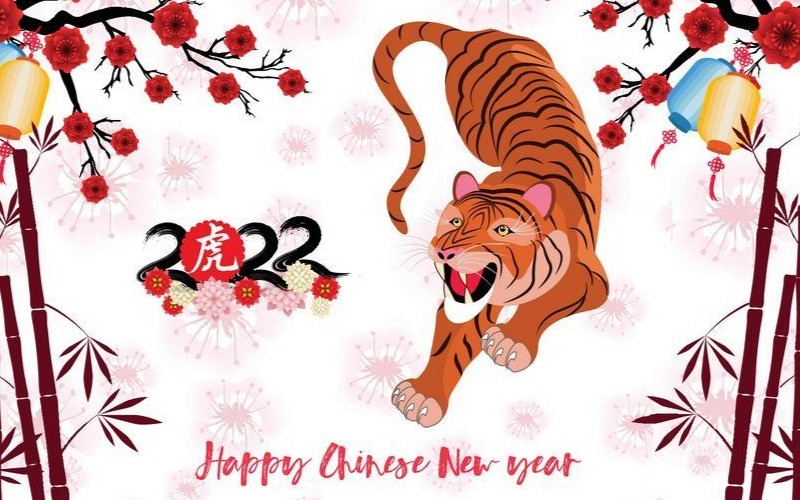 The Lunar New Year, based on a Lunisolar Calendar, begins February 1, the day of the February New Moon (12:46 a.m. EST / 5:46 UTC - Primary Moon Phase: New Moon - Lunation #1226). In Southeast Asia cultures, this begins what is known as the Spring Festival, which lasts until the 15th day of the New Year when the Lantern Festival occurs. In China, the 2022 New Year is known as the Year of the Water Tiger. Details:

Posted by Friends of the Zeiss at 12:00 AM No comments: