This diagram shows the position of the Earth, in relation to the Sun, at the time of the Vernal Equinox at the official beginning of the season of Spring in the Earth's Northern Hemisphere (Autumn in Earth's Southern Hemisphere), as well as the other solstices and equinox of the year.
(Graphic Source: ©1999, Eric G. Canali, former Floor Operations Manager of the original Buhl Planetarium and Institute of Popular Science (a.k.a. Buhl Science Center - Pittsburgh's science and technology museum from 1939 to 1991) and Founder of the South Hills Backyard Astronomers amateur astronomy club; permission granted for only non-profit use with credit to author.)

This, and the reason for seasons on Earth in the first place, is due to the fact that Earth rotates on its axis, which is tilted at a 23.439281-degree angle from the plane of the Earth's orbit around the Sun. As the Earth revolves around the Sun, this axial tilt causes one hemisphere of the planet to receive more direct solar radiation during that hemisphere's season of Summer and much less direct solar radiation a half-year later during that hemisphere's season of Winter. As mentioned, during an Equinox (about half-way between Summer and Winter, and about half-way between Winter and Summer) both planetary hemispheres receive an equal amount of solar radiation.

In the last few years, with the help of the Internet and Social Media, another urban legend has become prevalent. Now it is claimed that brooms can stand, on their own, on their bristles, only on an Equinox day. This is also false! Again, as with eggs, if a broom can stand on its bristles by itself (this usually only works with newer brooms, with more even bristles) on an Equinox, it can do so any day of the year!

The Vernal Equinox continues to be considered the beginning of the New Year, or an important holy day, in several other places on Earth ---
* Beginning of New Year (using the Solar Calendar) - Nowruz: Afghanistan and Iran / Persia.
* Holy Day for adherents to the Zoroastrian Religion and Baha'i Naw-Ruz, one of nine holy days of the Bahá'í Faith.

The week of the Vernal Equinox is the also the beginning of the National Cherry Blossom Festival held each year in Washington, DC, which begins on March 20. This festival commemorates the 1912 gift of 3,000 cherry trees from the Mayor of Tokyo to the City of Washington. The festival runs through April 14 this year.

As the Martian orbit around the Sun is more lopsided than the orbit of Earth, the speed Mars moves in its orbit varies quite a bit, depending on how close to the Sun Mars is at the time. Mars is further from the Sun during the Spring season in the Northern Hemisphere than the Autumn Season. Hence, Mars moves more slowly in its orbit during Spring resulting in the Spring season in the Northern Hemisphere (length: 194 Mars days)  being much longer than the Autumn season (length: 142 Mars days). While a day on Earth measures 24 hours, a day on Mars is just a little longer: 24 hours, 39 minutes, 35 seconds.

Once again this year, the small borough of Mars, Pennsylvania (about 25 miles / 40 kilometers north of Pittsburgh) will be celebrating the Martian New Year this week.

In another coincidence this year, the March Primary Full Moon phase of Earth's Moon occurs a few hours after the Vernal Equinox on Earth: Wednesday Evening, 2019 March 20 at 9:43 p.m. EDT / March 21 at 1:43 UTC. This is the first time since 1981 that a Full Moon and the Vernal Equinox occur on the same day. The Full Moon of March is known as the Worm Moon.

This year, the March Full Moon is also considered by some as a so-called "Super-Moon." This is due to the fact that the Moon passes the monthly perigee point, or point in lunar orbit closest to the Earth and when the Moon appears largest in our sky for the month, about a day before Full Moon. Lunar Perigee occurred this month on Tuesday Afternoon, 2019 March 19 at 4:00 p.m. EDT /20:00 UTC. The distance between Earth and the Moon, at that time, was 223,306.51495 statute miles / 359,377 kilometers.

Full Moon names for March, in the Southern Hemisphere, include Harvest Moon and Corn Moon.


Source: Glenn A. Walsh Reporting for SpaceWatchtower, a project of Friends of the Zeiss.
Wednesday, 2019 March 20. 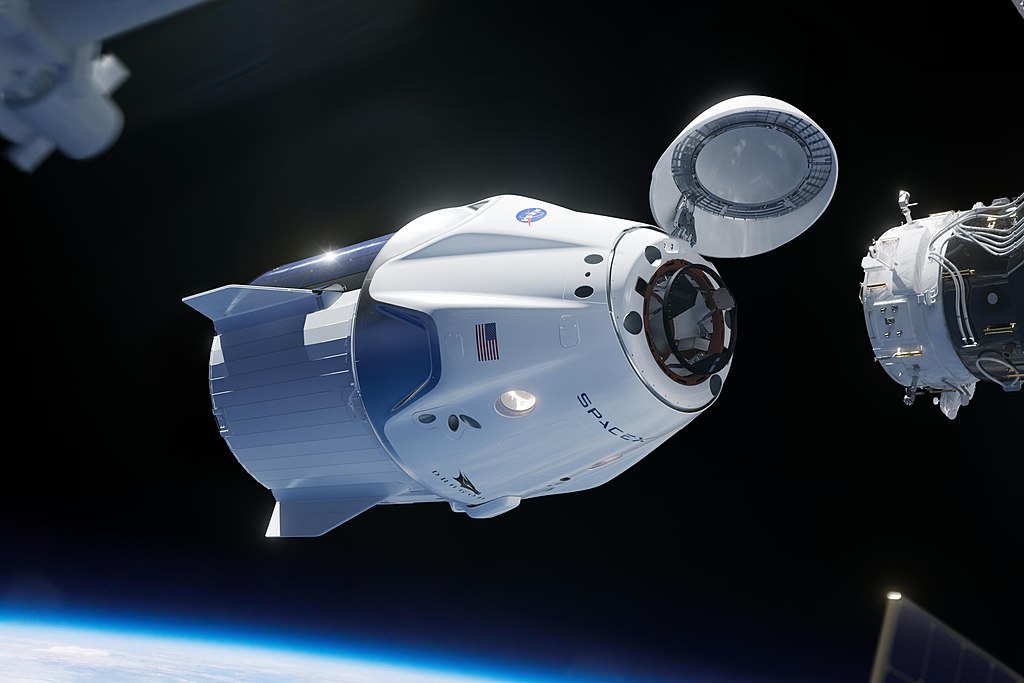 Artist's rendering of the SpaceX Crew Dragon spacecraft, which will be launched for the first time, without a crew, on Saturday, March 2, scheduled for 2:49 a.m. EST / 7:49 UTC from Cape Canaveral, Florida. Although weather looks good for a March 2 launch, the back-up launch date is March 5.
More information: Link >>> https://www.space.com/spacex-crew-dragon-test-flight-weather-forecast.html
(Image Sources: Wikipedia.org, By NASA/SpaceX - https://www.flickr.com/photos/nasakennedy/42840169205/, Public Domain, https://commons.wikimedia.org/w/index.php?curid=71616976)