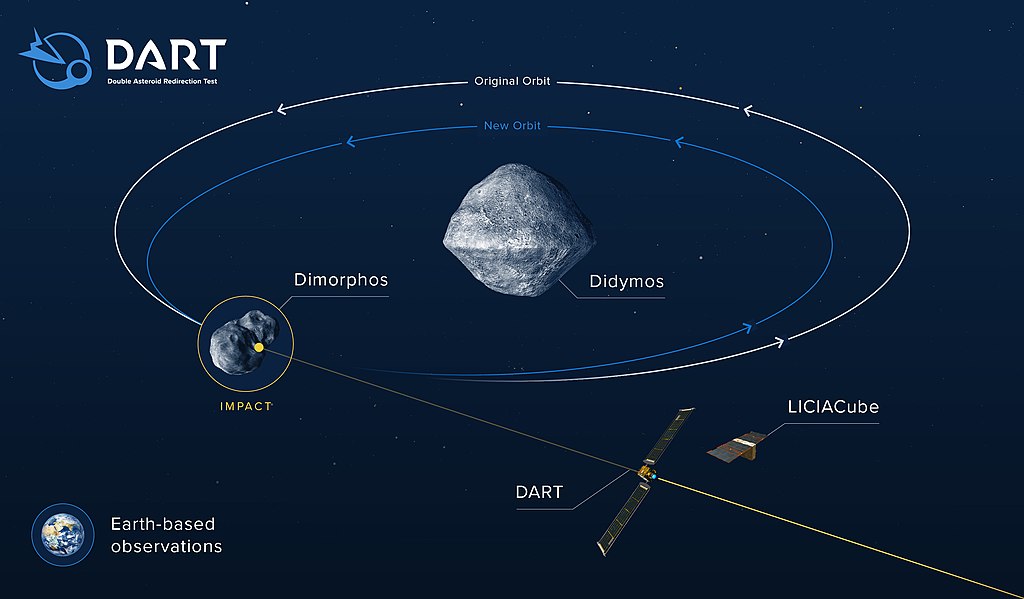 This graphic shows the original orbit of Didymos-B (satellite of asteroid Didymos; satellite also known as Dimorphos) and the new orbit of Didymos-B that is expected when NASA’s Double Asteroid Redirection Test (DART) spacecraft impacts the asteroid satellite, in a test of Earth planetary defense against asteroids which could hit our planet.

Earth Planetary Defense, from possible asteroid, comet, or large meteor impacts, has become increasingly vital, particularly since the large meteor explosion over Chelyabinsk, Russia on 2013 February 15. NASA’s Double Asteroid Redirection Test (DART) spacecraft, expected to launch early Wednesday morning, is designed to test a method of slightly deflecting an asteroid from an orbit that might possibly endanger the Earth in the future.

The target of the DART space probe is the double-asteroid, 65803 Didymos. Actually, the small satellite of 65803 Didymos, Didymos-B also known as Dimorphos, will be impacted during this demonstration.

The DART mission is scheduled for launch on a SpaceX Falcon 9 rocket, from Vandenberg Space Force Base near Lompoc, California, early on Wednesday Morning, 2021 November 24 at 1:21 a.m. Eastern Standard Time (EST) / 6:21 Coordinated Universal Time (UTC). NASA will begin Live-stream, Internet coverage of the launch Wednesday morning at 12:30 a.m. EST / 5:30 UTC (Internet link to the NASA Live-stream near the end of this blog-post).

The collision with Dimorphos is scheduled to occur on 2022 October 2.

Due to the binary nature of these two asteroids, they were then named “Didymos”, which is the Greek word for “twin”. The Didymos binary system has been classified a potentially hazardous asteroid and Near-Earth Object (of both the Apollo and Armor groups of Asteroids). However, at this time, the Didymos asteroid system does not cross the Earth's orbit. Hence, the deflection caused by this experiment could not cause an impact hazard with Earth.

Scientists have estimated that about 25,000 large asteroids exist in our Solar System, although only about 8,000 large asteroids have been cataloged. The Asteroid Belt, located between the orbits of Mars and Jupiter, contain between 1.1 and 1.9 million asteroids; but, the majority of these asteroids are very small.

Near-Earth Objects (NEO) are estimated to number more than 27,000; again, many of these NEOs are quite small. There are also more than 100 known short-period Near-Earth Comets (NECs). And, several meteoroids, which orbited the Sun, were large enough to be tracked before hitting the Earth.

So, finding a way to detect objects which could endanger the Earth, and finding a way to deflect such objects from a collision with the Earth, are high priorities with scientists today. DART is a test to see if crashing a spacecraft into an asteroid is an effective means to change its orbit, so that a future hazardous asteroid could be deflected to miss the Earth.

DART is mostly an impactor, designed to hit and deflect Dimorphos. The only scientific instruments that will be carried aboard DART are a Sun sensor, star tracker, and a 7.9-inch / 20 centimeter aperture camera. Based on a similar camera that flew on the New Horizons mission past Pluto, this camera supports autonomous navigation; it should help to ensure that DART hits the mini-moon at its center.

The DART spacecraft uses a NASA Evolutionary Xenon Thruster–Commercial (NEXT-C) engine, a type of ion thruster that provides solar electric propulsion, to provide the thrust to impact Dimorphos. It will use 240-square-foot / 22-square-meter solar arrays to generate the approximately 3.5 kilowatts needed for the mission.

The DART impact is expected to produce a velocity change in Dimorphos of about 0.4 millimeter-per-second. Although this should lead to a slight trajectory change in the asteroid system, it is expected that it would lead to significant change in the path of the asteroids over a longer length of time. Eventually, the orbital period of Dimorphos could change by as much as 10 minutes. Consequently, such a change could move the orbit of an asteroid or comet from a head-on collision with Earth to a safe fly-by of our planet.

While Earth-based telescopes and radar will be used to assess the success of the DART impact, an Italian cube-sat mini-probe, which will fly on the DART spacecraft, will be used to further assess the success of the mission. Ten days before impact, the Italian Space Agency (ASI) LICIACube (Light Italian CubeSat for Imaging of Asteroids) will separate from DART to send images of the impact and resulting ejecta back to Earth for analysis.

Then in 2024, an European Space Agency (ESA) spacecraft called Hera will be launched to confirm the results of the DART mission. Hera is expected to arrive near the Didymos system in 2027 to perform a detailed analysis of the mission results.

DART is a joint project of NASA's Planetary Defense Coordination Office and Baltimore's Johns Hopkins University Applied Physics Laboratory (APL). The space agencies of Europe, Italy, and Japan are also contributing to this project. Launching the DART payload on a Falcon 9 rocket is the only involvement of SpaceX with this project.