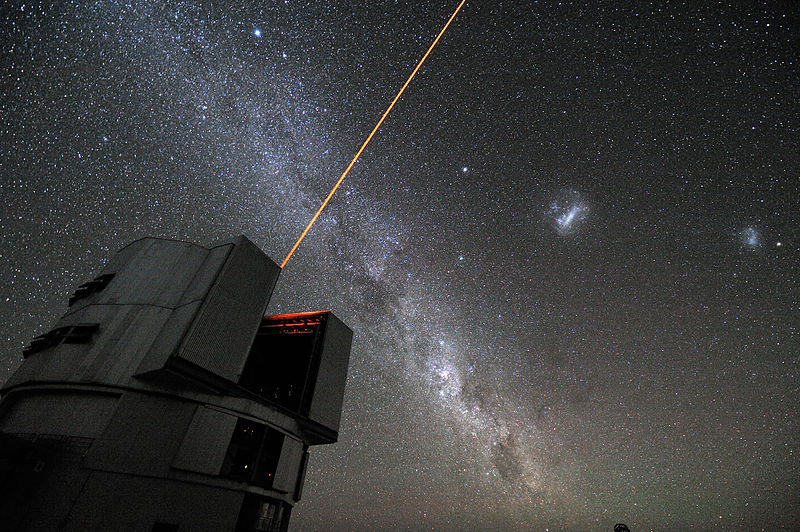 The Laser Guide Star of the Very Large Telescope (VLT) at the European Southern Observatory in northern Chile.

An Adaptive Optics Laser, being pioneered by the European Southern Observatory, is expected to greatly improve the sharpness of stellar images observed by ground-based telescopes. To do this, the Observatory and its commercial partners have developed a laser three times more powerful than the lasers currently used at astronomical observatories.

The problem that the European Southern Observatory (ESO) is trying to solve is the same problem that has vexed ground-based astronomers for hundreds of years. Atmospheric turbulence, which is what causes stars to appear to “twinkle” in the sky, has always made it more difficult for astronomers to study the composition and behavior of such stars, particularly dim and very distant stars.

To ameliorate this twinkling effect, astronomers have used nearby stable stars, brighter and often closer stars of which more information is known, to calibrate their telescopes. However, in many cases, such nearby stable, reference stars do not exist.

So, researchers have hit on the solution of creating artificial stars to help calibrate their telescopes. These artificial stars are created by using a laser to blast sodium atoms at a height of 55.9 statute miles / 90 kilometers in the atmosphere.

Such a laser, known as the Four Laser Guide Star Facility, already operates at the European Southern Observatory's Very Large Telescope (VLT) array, located on Cerro Paranal in the Atacama Desert of northern Chile. This laser, which currently has a strength of 22 watts, has been essential to the success of the VLT.

However, in order to create an even more stable, artificial guide star, ESO has now increased the new laser's power to 63 watts, nearly three times the power of the VLT laser. This more powerful laser comes from a Raman fiber amplifier laser source, developed by an ESO commercial partner, a Canadian company called MPB Communications.

Additional new technology, to assist with this Adaptive Optics Laser, has been developed by a German company, TOPTICA Photonics Ag. This company specializes in frequency “chirping,” which allows a laser to bounce back and forth between several frequencies. This provides larger bandwidths and more excited sodium atoms, and hence, brighter artificial stars to use for telescope calibration.

This new laser can also help with satellite communications. Atmospheric turbulence can also disrupt some of the newer laser systems in-use between satellites and ground stations. The Adaptive Optics Laser, with the greater power, may allow much better data transfer from satellites to ground stations. This will also be tested at the ESA facility in Spain.