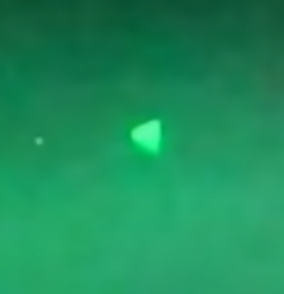 A still image from the video of a UFO, taken from the U.S. Navy ship, the USS Russell, off the coast of San Diego in July of 2019.

A U.S. Government study has preliminarily determined that 143 anomalous objects in the sky, observed by trained military aviators, cannot be identified. In this highly-anticipated public report, the U.S. Intelligence Community outlines what is known about Unidentified Aerial Phenomena (UAP), better known to the general public as Unidentified Flying Objects (UFOs),

The new report, released late on Friday (2021 June 25), does not speculate whether some of these unidentified objects are flown by extraterrestrial beings, as some amateur UFO researchers contend. Nor, does the report determine that the observed UAP is some type of breakthrough or disruptive technological advancement by nations such as China or Russia, or a terrestrial, non-state entity. Secret U.S. Government testing of advanced, technological air or space vehicles is also doubted, if not completely ruled-out.

The results of the report were inconclusive regarding the nature and intent of the unknown objects, due to the “limited amount of high quality reporting on” UAP. However, the report stated that “UAP clearly pose a safety of flight issue and may pose a challenge to U.S. national security.”

Last year, the U.S. Department of Defense released three videos (one from 2004 and two from 2015) , taken by U.S. Navy pilots, which showed mysterious objects flying at high rates of speed across the sky. In 2017, a report in The New York Times revealed the existence of the Defense Department's Advanced Aerospace Threat Identification Program (AATIP), which studied UAP from 2007 to 2012. Last August 4, the Unidentified Aerial Phenomena Task Force (UAPTF) was officially formed, within the U.S. Office of Naval Intelligence.

This unclassified, nine-page UAP report was issued following a classified report on UAP earlier this month. Several U.S. Congressional Representatives and Senators received a classified briefing on the earlier report.

The June 25 report, titled “Preliminary Assessment: Unidentified Aerial Phenomena”, was officially submitted to the U.S. Congress by the Office of the Director of National Intelligence (ODNI). This report was specifically requested by the U.S. Congress “in response to the provision in Senate Report 116-233, accompanying the Intelligence Authorization Act (IAA) for Fiscal Year 2021”.

This study focused on UAP “largely witnessed firsthand by military aviators and that were collected from systems we considered to be reliable.”

This contrasts with much older programs, administered by the U.S. Air Force (USAF), which studied UFO reports from the general public, in addition to governmental sources. The best known of these projects was Project Blue Book, which ran from March of 1952 to 1969 December 17. Project Blue Book was preceded by two shorter USAF projects which conducted similar studies: Project Sign (1947 and 1948) and Project Grudge (1948 to 1951).

The 144 UAP incidents summarized in the June 25 report were incidents which occurred between 2004 November and 2021 March. However, the majority of reports studied occurred between 2019 and the present. Most incidents studied were of UAP “that interrupted pre-planned training or other military activity.” According to the report, “UAP sightings also tended to cluster around U.S. (military) training and testing grounds, but we assess that this may result from a collection bias...”

The reason the UAP Task Force concentrated on the last two years was because it was not until March of 2019 when the U.S. Navy established a “standardized reporting mechanism” for reporting UAP. The U.S. Air Force adopted that standardized reporting mechanism in November of 2020. Additionally, technical data from the Federal Aviation Administration (FAA) is being used to assist in the analysis of UAP reports.

“Some UAP appeared to remain stationary in winds aloft, move against the wind, maneuver abruptly, or move at considerable speed, without discernible means of propulsion. In a small number of cases, military aircraft systems processed radio frequency (RF) energy associated with UAP sightings...The UAPTF holds a small amount of data that appear to show UAP demonstrating acceleration or a degree of signature management.”

Only one of these 144 UAP incidents was identified “with high confidence”: “a large, deflating balloon. The others remain unexplained.”

The report states “Limited data and inconsistency in reporting are key challenges to evaluating UAP.”

The UAP Task Force did hear about anecdotal observations, but could not analyze them without some type of formal or informal report.

Airborne Clutter: These objects include birds, balloons, recreational unmanned aerial vehicles (UAV), or airborne debris like plastic bags that muddle a scene and affect an operator’s ability to identify true targets, such as enemy aircraft.

U.S. Government or Industry Developmental Programs: Some UAP observations could be attributable to developments and classified programs by U.S. entities. We were unable to confirm, however, that these systems accounted for any of the UAP reports we collected.

Foreign Adversary Systems: Some UAP may be technologies deployed by China, Russia, another nation, or a non-governmental entity.

Other: Although most of the UAP described in our dataset probably remain unidentified due to limited data or challenges to collection processing or analysis, we may require additional scientific knowledge to successfully collect on, analyze and characterize some of them. We would group such objects in this category pending scientific advances that allowed us to better understand them. The UAPTF intends to focus additional analysis on the small number of cases where a UAP appeared to display unusual flight characteristics or signature management.

The primary conclusions given in the June 25 UAP report were that, to explain UAP, better collection of incidents and more robust analysis of UAP cases will be necessary. And, this will require a greater commitment of financial resources.

This report only studied military (primarily from the U.S. Navy) reporting of incidents of UAP between 2004 November and 2021 March. However, military observations of such unidentified phenomena date back much further.

When most people hear the words, “Foo Fighters”, they think of the popular rock-and-roll band, which recently re-opened New York City's Madison Square Garden with the first post-pandemic concert before a sold-out house of more than 15,000 fully-vaccinated fans. However, the words “Foo Fighter” actually originated from the name given to UFOs by perplexed and frustrated military aviators, during World War II.

In November of 1944, Foo Fighters, described as fast-moving, round glowing objects, began to be observed. Pilots and air-crew reported that these Foo Fighters would fly formation with their aircraft and could not be out-maneuvered or shot-down. Although the Foo Fighters seemed to be under intelligent control, they never displayed hostile behavior.

The name “Foo Fighter” was coined by Donald J. Meiers, a radar operator in the 415th Night Fighter Squadron, who had taken the word “Foo” from a syndicated, newspaper comic-strip (seen in the Chicago Tribune), Smokey Stover. Drawn by cartoonist Bill Holman, Smokey Stover's catch-phrase was "where there's foo, there's fire".