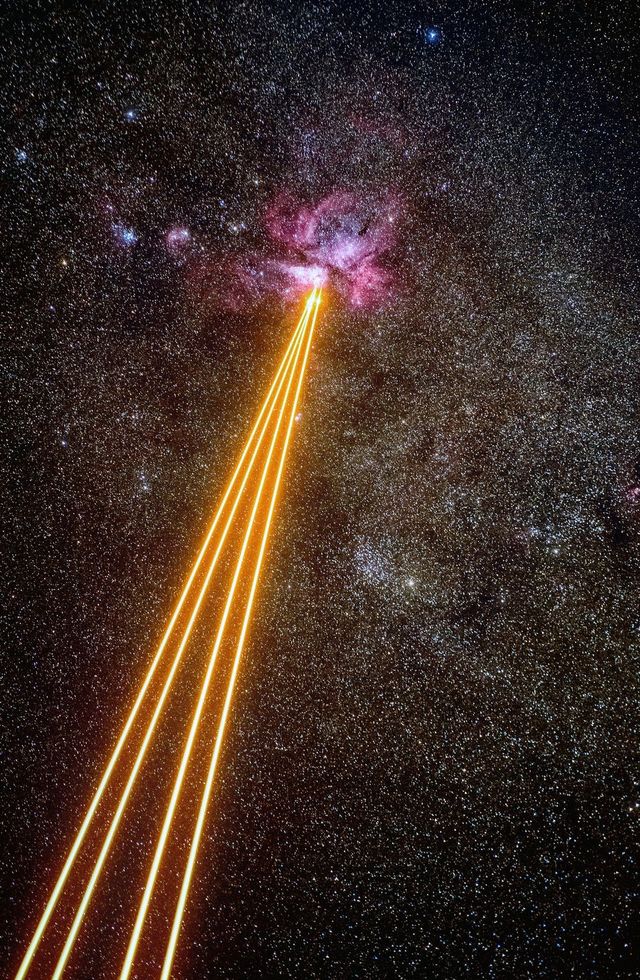 Image issued by the European Southern Observatory, which graphically illustrates the use of lasers to provide a clearer image of the Carina Nebula, one of the brightest nebulae in the night sky.

Located in the Atacama Desert in northern Chile, the VLT is one of the world's most advanced telescopes. It consists of four Unit Telescopes, each with 27-foot / 8.2-meter mirrors, which can change configuration to adapt to turbulence in the Earth's atmosphere.

Atmospheric turbulence has always been a major problem of ground-based telescopes. This turbulence, which causes stars to twinkle, often blurs observations of far away stars, nebulae, and galaxies.

Lasers now aid in the resolution of this turbulence problem. High-tech adaptive optics, attached to the VLT, point and fire powerful lasers toward a target area of the sky astronomers wish to observe. Although a small amount of this laser light may some day reach the star, nebula, or galaxy being observed (at the speed of light, for most celestial objects this would take quite a long time), the laser is not meant to go further than our atmosphere.

The glowing particles are then used as reference “stars” by VLT computers, to measure the distortion of that particular part of Earth's atmosphere. The computers can then adapt telescope optics to receive telescopic images almost as clear as images from a space telescope.

> First image of a planet outside of our Solar System.

> First to track individual stars around the super-massive black hole at the center of our Milky Way Galaxy.

> First to observe the dim glow of the farthest known Gamma Ray Burst.