Mars: Bright Beacon in the Night Sky in July & August ! 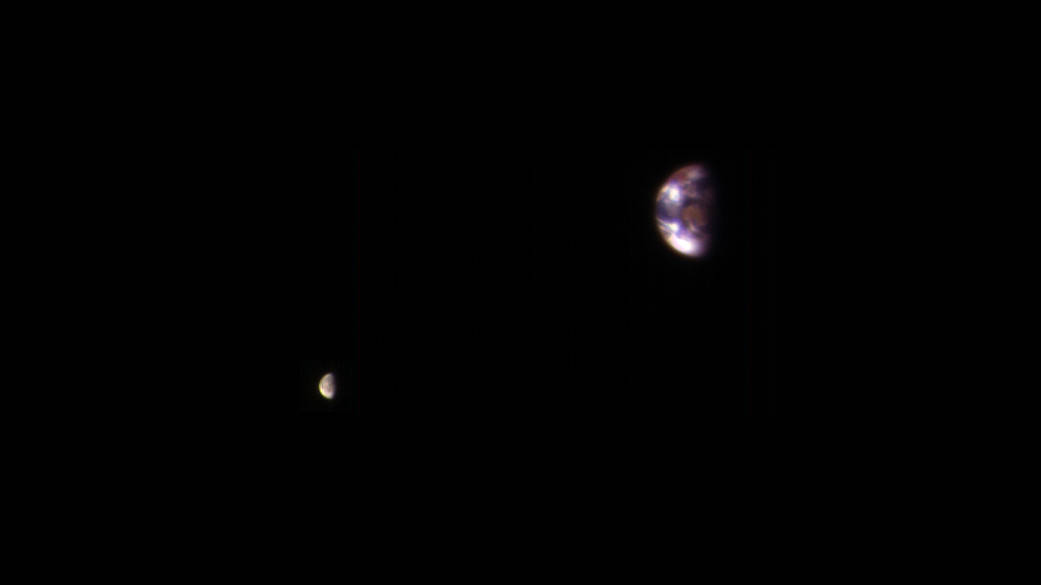 The Earth and the Earth's Moon as seen from Mars on 2016 November 20, using NASA's largest telescope in orbit of Mars, the High Resolution Imaging Science Experiment (HiRISE) camera on NASA's Mars Reconnaissance Orbiter. For the next two months, Earthlings will have the best view of Mars available in the last 15 years! (Image Source: Jet Propulsion Laboratory / NASA)

Now, through the beginning of September, will be the best time in the last 15 years to view the Planet Mars from Earth. Earth will make its closest approach to Mars in 15 years on July 31 [at 4:00 a.m. Eastern Daylight Saving Time (EDT) / 8:00 Coordinated Universal Time (UTC)] !

The reason Mars will appear so close is because this year's Mars Opposition (Mars Opposition, when the Earth comes directly between Mars and the Sun, happens every 2 years and 50 days - the last Mars Opposition was on 2016 May 22) occurs near the same time as the Mars Perihelion, or the closest point in the Martian orbit that Mars ever comes to the Sun.  The last time Mars was this close to Earth was in 2003 (distance of 34.6 million statute miles / 55.7 kilometers), when Mars was the closest it had come to Earth in 59,635 years (since the year 57,617 B.C.). This year, the Mars Perihelic Opposition will only be 1.2 million statute miles / 2 million kilometers shy of the 2003 record!

The Earth comes close to Mars about once every two years (along with Mars Opposition), as Earth's one-year orbit of the Sun and Mars' approximately two-year orbit of the Sun (exactly 1.88082 Earth years) coincide. The next time Earth approaches Mars as closely as this year will be in the year 2035.

If you have never seen Mars in a telescope or binoculars, this Summer is the time to do so! Although, regrettably, due to a global-wide dust storm that continues plaguing Mars, it may be difficult to see details on the Red Planet.

However, you need to plan where and when to look for Mars. Due to what astronomers call Mars' current declination (one of two angles in an equatorial coordinate system, sort-of like astronomical longitude), Mars will be passing fairly low in the sky each night this Summer.

Of course, there are specific times when Mars will be available for viewing.

On July 27 [at 1:00 a.m. EDT / 5:00 UTC], just four days before Earth's closest approach to Mars, Mars will be at astronomical Opposition from Earth's perspective, when the Earth is directly between the Sun and Mars. At this time, Mars will rise in the southeast at approximately local sunset, stay in the sky all-night long, and set in the southwest at approximately local sunrise.

At Mars Opposition, Mars will be 0.39 Astronomical Units [1 Astronomical Unit (a.u.) is the average distance between Earth and the Sun (average of aphelion and perihelion distances) = 92.9558072730249 million statute miles / 149.597870700million kilometers] from Earth. This will be a distance of 3.2 light-minutes - it will take 3.2 minutes for light, or radio signals, to travel from Mars to Earth (or visa-versa). At this time, the Apparent Visual Magnitude of Mars will be -2.8.

At the present time, Mars rises in the late evening and sets about an hour and a-half after sunrise. By early September, Mars rises just before dinner-time and sets in the early morning.

Although very bright this Summer, on and after July 27 you do need to wait until Dusk to start looking for Mars. And, Mars will be visible through Dawn, on and before July 27.

A great Internet web-site to learn the daily rise and set times of Mars, and all of the other planets in Earth's Solar System, for your particular location, is Heavens-Above:
Link >>> https://www.heavens-above.com/PlanetSummary.aspx

If you find a good location, and look in the right direction at the right time, you will have no trouble finding Mars. It will appear as the bright reddish-orange beacon in the night sky.

Mars is not the only planet visible in the night sky, this Summer. At the present time, the bright Planet Venus can be seen dazzling for a couple hours after sunset in the western sky. The Planet Jupiter, almost as bright as Mars this Summer, is high in the southwestern sky after sunset, setting in the early morning. And, the Planet Saturn, which is much dimmer (sixth planet from the Sun - July 11 Apparent Visual Magnitude +0.1), can be found at about the same declination as Mars, approximately between Mars and Jupiter.


Source: Glenn A. Walsh Reporting for SpaceWatchtower, a project of Friends of the Zeiss.
2018 July 11.