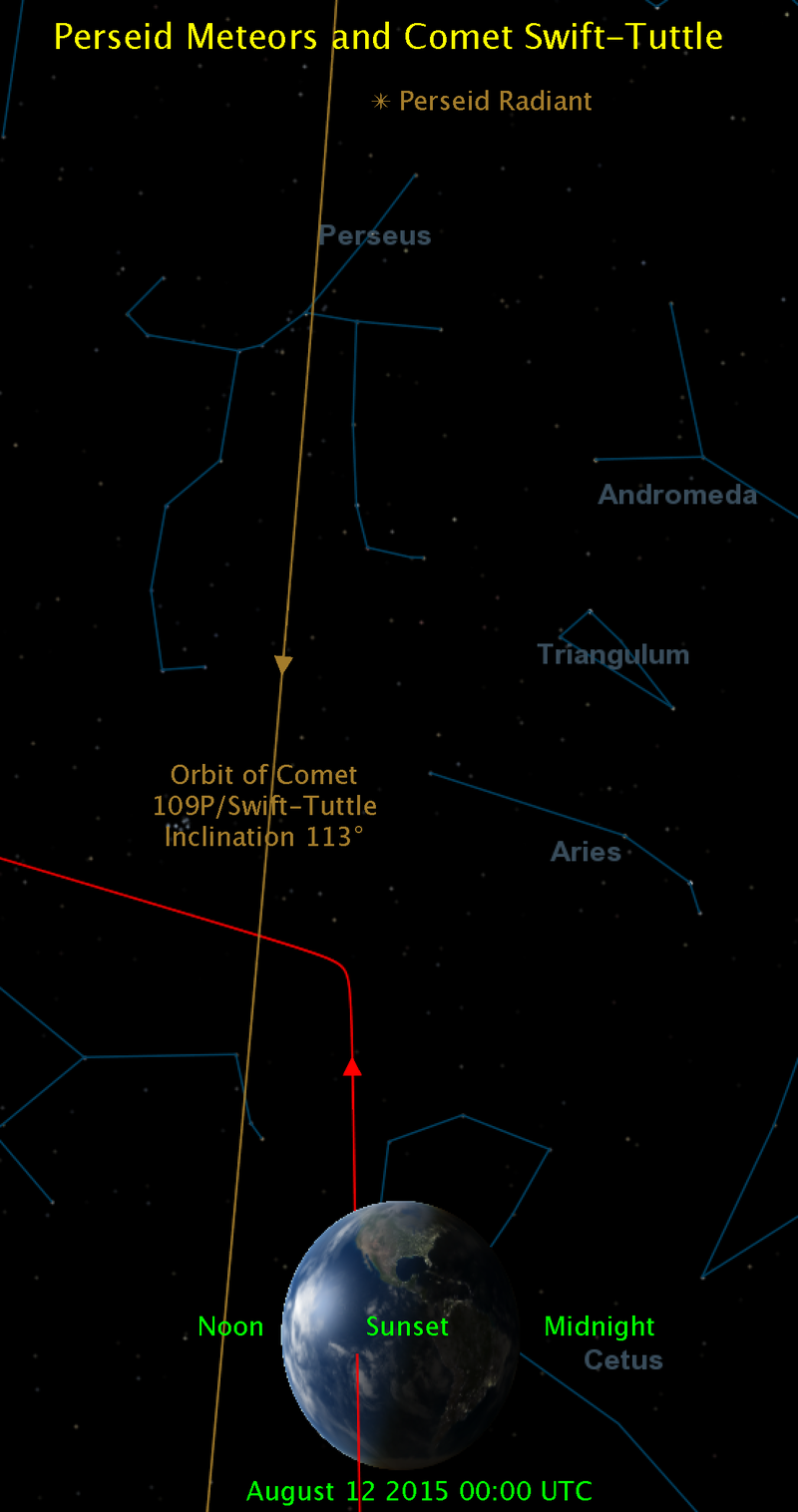 This graphic shows the spatial relationships of the Earth, the Comet Swift-Tuttle (parent of Perseid meteors), and the Constellation Perseus (apparent radiant of Perseid meteors), at the time of the Perseid Meteor Shower on 2015 August 12.
(Image Sources: Wikipedia. org :"Perseid Meteors and Comet Swift-Tuttle" by Aanderson@amherst.edu - Own work. Licensed under CC BY-SA 4.0 via Wikimedia Commons - https://commons.wikimedia.org/wiki/File:Perseid_Meteors_and_Comet_Swift-Tuttle.png#/media/File:Perseid_Meteors_and_Comet_Swift-Tuttle.png )

This year's Perseid Meteor Shower, which peaks tonight (Wednesday Evening / Thursday Morning), is expected to be one of the best of the last few years, due to little moonlight obscuring the dimmer meteors. Internet web-casts of this Shower are available, for areas which experience cloudy weather.

The peak of the Perseid Meteor Shower, this year, actually occurs early Thursday Morning, 2015 August 13 at 2:00 a.m. Eastern Daylight Saving Time (EDT) / 6:00 Coordinated Universal Time (UTC). And, the best time to watch most meteor showers, including this year's Perseids, is always between local midnight and dawn, when the Earth is rotating into the meteor shower.

During the peak time, often 50 to 80 meteors can be seen per hour, if observing conditions are ideal. As most meteors are often dim, it is best to view a meteor shower away from city lights, which cause a brightening of the sky at night, and hence, the dimmest meteors are often missed. And, you want to go out ahead of time, before you start actual viewing of meteors, to get your eyes accustomed to the dark sky. Dark-adapting your eyes for meteor watching could take up to a half-hour.

At this time, the Moon will be in a waning crescent phase, providing little reflected sunlight to obscure the dimmer meteors. In fact, the New Moon phase, when the Moon cannot be seen at all (except during a solar eclipse), is the very next day: Friday Morning, 2015 August 14 at 10:53 a.m. EDT / 14:53 UTC (Lunation # 1146).

Viewers in the Northern Hemisphere are fortunate that the Perseid Meteor Shower arrives during the Summer month of August, when temperatures are comfortable for nighttime viewing, although sometimes August can be very humid with poor seeing conditions.

Binoculars and telescopes are not very useful for finding meteors. Meteors streak across the sky in a very brief period of time, too short to aim binoculars or a telescope. So, the best way to view a meteor shower is to lie on the ground, in an area with a good view of the entire sky (with few obstructions such as buildings, trees or hills), and keep scanning the entire sky.

Meteor showers appear to emanate from a radiant point in the sky. For the Perseid Meteor Shower, the radiant appears to be the Constellation Perseus, named for the hero of Greek mythology. However, you should not, necessarily, be looking only at Perseus, when looking for meteors in this shower. Meteors can appear in any part of the sky at any time. In fact, looking  towards Perseus may not result in finding the best meteors, as meteors coming from the apparent radiant may be seen for a shorter time in the sky.

The Earth's gravity then attracts many of these meteoroids to fall to Earth, and they are viewed by people as meteors, as they burn-up in the atmosphere. Most are extremely small and burn-up completely. From time-to-time, larger particles enter the atmosphere and create brilliant displays known as fireballs. If these particles are large enough, they may not completely burn-up and land on Earth as a meteorite.

Meteors can be seen any night of the year, although they are not predictable and are rare outside of one of the annual meteor showers. The vast majority of meteors that can be seen during the Perseid Meteor Shower originate from the Comet Swift-Tuttle, which has an orbital period of 133 years, leaving behind a trail of dust and grit. Comet Swift-Tuttle was discovered in 1862 and returned for viewing in 1992.

Comet Swift-Tuttle measures about 16-miles across, much larger than the object that is thought to have fallen to Earth which resulted in the extinction of the dinosaurs. Comet Swift-Tuttle will make a very close approach to the Earth in  the year 4479. Scientists are now studying whether some day Comet Swift-Tuttle could impact the Earth. Comet Swift–Tuttle has been described as "the single most dangerous object known to humanity".

So, the time for viewing is right and the lack of moonlight is great. And, of course, with the warm weather most of us experience in the Northern Hemisphere, this time of year, what could be better for viewing meteors?

Of course, meteor showers. like all celestial observations, are weather-permitting. If the weather in your area does not permit direct viewing outdoors of this meteor shower, it can be viewed during special web-casts at a couple sites on the Internet.

A cautionary note for those who find it necessary to watch the Perseid Meteor Shower on the Internet. The video camera, used for each web-cast, can only aim at one part of the sky at a time. Hence, do not expect to see as many meteors as you might see with your own eyes outside. Outdoors, you can easily scan the entire sky for meteors, while a camera aimed at one area of the sky will only be able to see the meteors that enter that particular part of the sky

Fifth largest fragment of the meteorite which struck Barringer Meteor Crater near Winslow, Arizona, which was displayed at Pittsburgh's original Buhl Planetarium and Institute of Popular Science:
Link >>> http://buhlplanetarium2.tripod.com/Buhlexhibits.htm#meteorite