The famous 'Earthrise' photograph from the NASA spacecraft Apollo 8, the first mission with human beings to travel to the Moon; this photograph helped to spark the Earth environmental movement of the 1970s. The crew entered lunar orbit 50 years ago on Christmas Eve, Tuesday, 1968 December 24. That evening, the astronauts held a live television broadcast, reading passages from the Book of Genesis in the Christian Bible and showing pictures of the Earth and Moon as seen from their spacecraft.
(Image Source: NASA)


Editor's Note: Precisely 50 years ago, from the time of the posting of this blog-post, NASA's Apollo 8 spacecraft became the first space mission with humans to go behind Earth's Moon, out of sight and out of touch with Earth, and enter lunar orbit: 4:59 a.m. Eastern Standard Time (EST) / 9:59 Coordinated Universal Time (UTC) on Tuesday, 1968 December 24, Christmas Eve. The following is a brief essay regarding the historical and scientific significance of the Apollo 8 mission. The author of this essay is Francis G. Graham, Professor Emeritus of Physics, Kent State University, and Founder of the American Lunar Society. Earlier in his career, he was a Planetarium and Observatory Lecturer at the original Buhl Planetarium and Institute of Popular Science (a.k.a. Buhl Science Center), Pittsburgh's science and technology museum from 1939 to 1991.

December 21, 1968 was the shortest day of the year for areas of Planet Earth north of the equator. But it was the longest stretch of a day in history. As Carl Sagan pointed out, people in the 25th century, if there are any, will not remember the causes of the war in Afghanistan or the political machinations of the Trump administration. Instead, they will remember that in the late 1960’s there were the first expeditions of humans to the Moon and the space beyond Earth orbit.

It was on that day that Apollo 8, the first human expedition to the Moon, left the Earth. There was no landing, the flight was a flight around the Moon, in lunar orbit. The rocket that propelled it there was a great marvel, the 360-foot-tall Saturn V, using hydrocarbons and liquid oxygen as fuel. Of the entire 360-foot-tall rocket, only the 12-foot-tall Command Module capsule returns to Earth from the Moon. Consider that 29/30 of the length is discarded along the way, and an even larger amount of the mass. It is quite possible in the year 4200 some Thor Heyerdahl will try to prove that the Ancient Americans could have reached the Moon on such improbable chemical rockets. 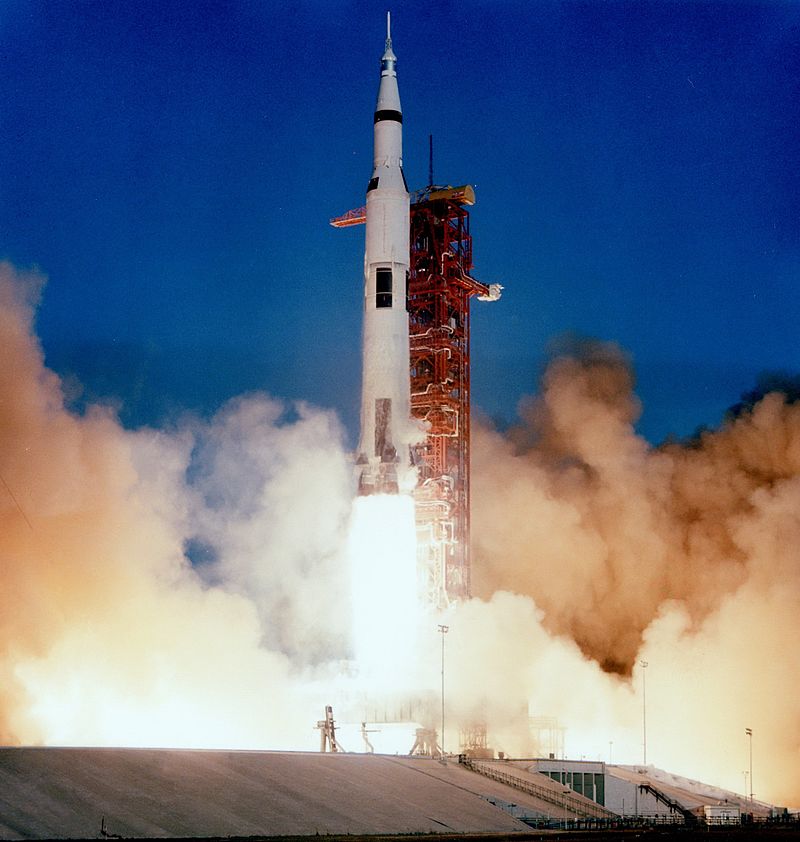 The astronauts on Apollo 8 are legends. Colonel Frank Borman of the U.S. Air Force, part of the Gemini 7 mission three years prior, was the Command Pilot; Captain James A. Lovell, a Naval Pilot, part of the 1966 Gemini 12 mission, was the Command Module Pilot, and would return to the region of the Moon again in Apollo 13. Lovell was the only man who could claim to have visited the Moon twice, with the exception of Baron von Munchausen, who notably also claimed that distinction, but with far less veracity. Finally, there was Major William Anders, an Air Force pilot, who was designated the Lunar Module Pilot, but in Apollo 8 he had no Lunar Module to pilot.


Apollo 8 was not initially supposed to be a lunar mission, but an Earth orbital one. Instead, Apollo 9 was the developmental checkout mission in Earth orbit that was to have been originally Apollo 8. However, it is not generally known that there were geopolitical reasons why Apollo 8 was designated as a lunar orbit mission in December, 1968. In Kazakhstan, the Soviet Union had a lunar orbit mission or a circumlunar mission on the launch pad being prepared for launch. A Soyuz craft was on top of a Proton booster, and could then, or even now, perform a lunar circumlunar mission. Modified Soyuz craft were previously sent on unmanned circumlunar missions, called the Zond series, one even carried animals and returned them safely to Earth. A painting of a Soyuz craft in the National Air and Space Museum shows a rear toroidal fuel tank, which would have been used on the circumlunar mission.


Problems with the manned Zond circumlunar mission kept it on the ground in December, 1968, and then Apollo 8 became the first lunar mission. The manned Zond was then canceled.
The Apollo 8 mission accomplished its objectives: engineering tests of the Apollo-Saturn V system, lunar photography and panoramic camera imaging from lunar orbit. Most importantly was the photography of the Earth from lunar orbit, which truly transformed the perspective of many people. After all, until Apollo 8, and starting with Magellan’s expedition in 1522, there had been only circumnavigation of the Earth, albeit successively faster. Apollo 8 was topologically different, it was an orbit of the Moon. With Apollo 8, we saw the Earth whole and distant, rising above the lunar surface as Apollo 8 orbited.


On Christmas night, with the Moon and Earth in the television camera, passages from the Bible were read by the astronauts. There were, to be sure, some who objected on separation of state issues, as Apollo was a government program. But most Americans were deeply touched by the reading and the view from space.


But when one considers the U.S. Constitution, one wonders why there should have been an Apollo at all. The powers of the government in the Constitution, e.g common defense, courts, etc. do not include space travel. There was no military utility in the Moon. Normally in America new transportation technology was pioneered by private enterprise; in the pre-Apollo realistic George Pal movie Destination Moon and in the prophetic Fritz Lang silent film Frau im Mond this was the case. But in Apollo, we saw a government financing the trips to the Moon; ironic since in the opposing Communist system the government also financed space travel. Now we are seeing a shift toward private financing of space travel 50 years later, although, even in the time of the Apollos, communications satellite technology was privately financed to a large degree.


Apollo 8 was truly revolutionary, and the further efforts of 1969-72 built upon it. We can only wonder when a return to the Moon will occur, and who will do it.

Source: Francis G. Graham, Professor Emeritus of Physics, Kent State University and Founder of the American Lunar Society. Earlier in his career, Planetarium and Observatory Lecturer at the original Buhl Planetarium and Institute of Popular Science (a.k.a. Buhl Science Center), Pittsburgh's science and technology museum from 1939 to 1991.
Monday, 2018 December 24.