Photograph of an Open Armillary Sundial (which tells both time and date) located at the northern tip of Library Park, near the center of the Pittsburgh suburb of Carnegie, Pennsylvania; at the top of Library Hill is the historic Andrew Carnegie Free Library and Music Hall, the fourth (of only five) Carnegie libraries both built and endowed by industrialist and philanthropist Andrew Carnegie. This was the first of several Pittsburgh-area sundials visited by the North American Sundial Society on August 17, during their annual conference.
(Image Source: Friends of the Zeiss; Photographer: Pittsburgh-Area Free-Lance Photographer Lynne S. Walsh)

Today, with computers, smart-phones, and atomic clocks, are sundials, for telling time, really obsolete? For a dedicated group of amateur scientists, members of the North American Sundial Society, the answer to this question is an emphatic no! In fact, they are using computers and high technology to design and create even better sundials!

This-past weekend (August 16 to 19), the North American Sundial Society held their annual conference in the Oakland Civic Center District of Pittsburgh. The conference included many sessions on new types of sundials and new ways to design and use sundials, in addition to spending a day visiting several local and historic sundials in the Pittsburgh area.

Several of the sessions were presented by Fred Sawyer, whose breadth of knowledge of all aspects of telling time by sundial is amazing. He is President of the North American Sundial Society (NASS) and co-founded the educational organization in the Autumn of 1993. Mr. Sawyer, who now lives in Connecticut, received Masters Degrees in History and the Philosophy of Science from the University of Pittsburgh in 1976.

Mr. Sawyer's presentations ranged from determining the mathematical scales for laying-out a horizontal sundial to a session on how to create a sundial that tells time by the light of the Moon! Mr. Sawyer, and NASS member Frank King, both made presentations regarding Ring Sundials, smaller portable sundials that one can carry with them or wear.


“3D Printing A Double Helix Sundial” was the title of a presentation delivered by NASS member Bob Kellogg. According to Mr. Kellogg, it takes 21 hours and 55 minutes to complete a 3D-printed sundial.

One fascinating presentation regarded a house in Mexico, which was designed so that the Sun shone onto indoor sundials! The presentation, “El Cerrito Pyramid & The Cosmic Room,” was prepared by the home's owner, Mexican Statistics Professor Ruben Hernandez Herrara. Unfortunately, due to visa problems, Professor Herrara was not able to attend the conference; NASS member Bob Kellogg made the presentation.

NASS member Ken Clark demonstrated how to get more public attention to sundials by mounting small sundials on or near local businesses. With both a presentation and an exhibit, he showed how he set-up a small vertical sundial at a Rita's Italian Ice store in Elizabethtown, Pennsylvania.

In addition to discussing Pittsburgh-area sundials, there were sessions on St. Louis-area sundials and “Gnomonic Activities in Italy.” And, NASS member Will Grant showed photographs of his visit to the Millennial Solar Monument near Antofagasta, Chile. This Monument was constructed in the Southern Hemisphere on the Tropic of Capricorn, the southern-most latitude where the Sun can be directly overhead.

The annual Sawyer Dialing Prize was awarded to Italian NASS member Gianpiero Casalegno for creating computer software tools to assist in the development of new sundials. Mr. Casalegno donated the small cash prize to a new sundial being built in Seattle.


Mr. Sawyer emphasizes that researching sundials is multidisciplinary, including several academic areas such as science, mathematics, technology, history, and culture.

From time-to-time, the NASS assists in some public educational programs, including a STEM (Science-Technology-Engineering-Math) festival in Washington DC a few years ago. More recently, NASS participated in a program at the National Archives, again in Washington.

NASS, which publishes a quarterly journal, has also participated in a history book project with the Adler Planetarium in Chicago. And, from time-to-time NASS members contribute to projects to build new sundials, including a sundial mural expected to be completed next month in Bellingham, Washington.

The local host for the 24th annual conference of the NASS was John Sibenac. In addition to his interest in sundials, Mr. Sibenac produces bookmarks from postage stamps, including the wonderful postage stamp issued last year in commemoration of the Great American Solar Eclipse. A first-of-a-kind stamp, the heat from the touch of a finger transforms the eclipsed Moon into the image of the Moon! 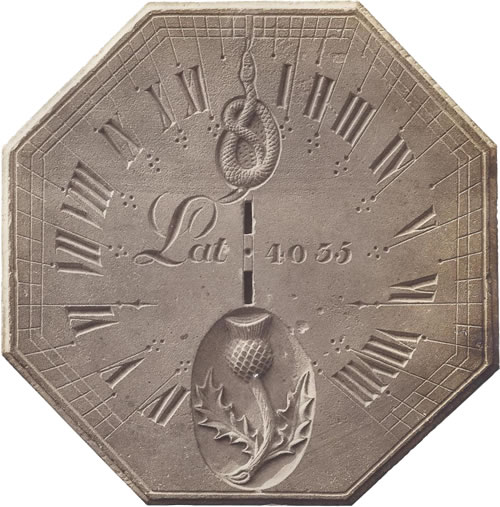 Photograph of the sundial discovered buried just outside of the Block House of historic Fort Pitt, in Pittsburgh, in 1894. Found without the gnomon, it is believed to date from 1763 following the Battle of Bushy Run during Pontiac's Rebellion, immediately following the French and Indian War. In addition to receiving a site visit by the North American Sundial Society, this sundial was the topic of one of the history presentations at the Pittsburgh conference.
(Image Source: Fort Pitt Society, Daughters of the American Revolution / Fort Pitt Block House)


Source: Glenn A. Walsh Reporting for SpaceWatchtower, a project of Friends of the Zeiss.
Wednesday, 2018 August 22.