Hunt for Higgs Boson Continues; Scientists Work to Separate the 'Signal from the Noise' 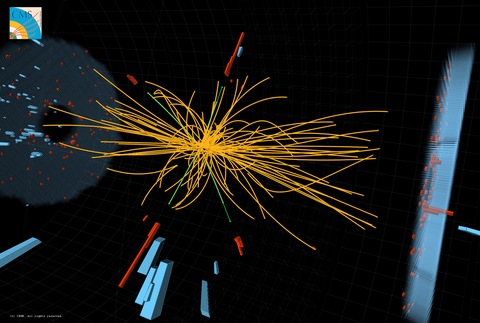 Protons collide at CERN's CMS experiment Image by Thomas McCauley, Lucas Taylor/CERN.
What does the Higgs boson mean to physics, and how will particle physicists know when they've found it?
Evidence of the elusive Higgs Boson may be peeking out from some very dense data, but scientists are not ready to conclude that they've found it, according to an announcement in a crowded auditorium Tuesday morning at CERN, the European Organization for Nuclear Research.
Scientists from two separate experiments there -- C.M.S. and Atlas -- said they have found promising hints of Higgs, and evidence that the particle weighs about 125 billion electron volts. But, they say, they need more data to prove that it's not a statistical fluke.
But let's back up. The Higgs boson is an invisible particle believed to be responsible for endowing other particles -- and thus by extension everything else in the universe -- with mass. Finding Higgs would complete a vital piece of the puzzle of the standard model of particle physics by proving that there is an invisible "Higgs field," which permeates all of space. As particles swim through the Higgs field, they take on mass, some more than others.