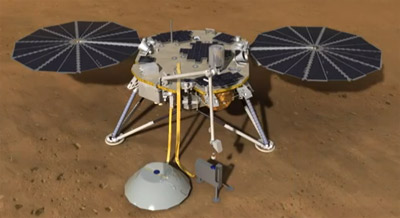 InSight Mars Lander, scheduled to be launched by NASA in
March of 2016. (Image Source: NASA)

InSight Mars is a robotic, stationary lander, which NASA plans to launch to Mars in March. The deadline for Mars and space enthusiasts to add their name to a computer chip which will be on the lander is Tuesday night (2015 September 8) at 11:59 p.m. Eastern Daylight Saving Time (EDT) / Wednesday at 3:59 Coordinated Universal Time (UTC).

An Internet link, for members of the general public to add their name to this spacecraft lander, is at the end of this blog post.

InSight, which is an acronym for Interior Exploration for Seismic Investigations, Geodesy, and Heat Transport, will launch on an Atlas V 401 rocket from Vandenberg Air Force Base in California on March 4. It is scheduled to land in Mars' Elysium Planitia (Plain of Ideal Happiness) on 2016 September 20. Once on Mars, the mission is designed to last two years.

The mission of InSight Mars is to study the early geological evolution of Mars, and by extension, have information that could help understand the early geological evolution of all of the terrestrial planets, and some of the moons, of our Solar System, as the inner, rocky planets have a shared ancestry. The InSight Mars lander includes a seismometer and a heat transfer probe. Some of this technology has already been used on NASA's Phoenix lander, which landed on Mars in 2008.

The spacecraft will include two cameras and a sensor which will track the planet's wobble, as it is pulled by the Sun. It will also include wind and temperature sensors, as well as a magnetometer to measure magnetic disturbances caused by the Martian ionosphere.

The InSight Mars scientific team is led by W. Bruce Banerdt of NASA's Jet Propulsion Laboratory in Pasadena. U.S. and international co-investigators on this mission include French and German space agencies (which are contributing instruments to the spacecraft), as well as others from universities, industry, and government.

The InSight Mars lander will be accompanied to Martian orbit by two “cubesats.” These two miniature satellites will help provide communications relay between the lander and Earth, during the landing phase. Other satellites in orbit of Mars will not be in the right position to provide such a communications link.